WhatsApp launched out of beta 10 years ago this month, and the messaging behemoth is now a completely different beast from the one that quietly arrived for iPhone users way back in November 2009. After Facebook shelled out around $20 billion to acquire the app in 2014, WhatsApp introduced voice calls, video calls, group calls, web and desktop apps, end-to-end encryption, and fingerprint unlocking. All the while, Facebook has been figuring out how to monetize its gargantuan acquisition by targeting businesses.

However, there remains one glaring chink in WhatsApp’s otherwise expansive armor — namely, the lack of simultaneous multi-device support. Things could be about to change, however.

Given that WhatsApp is tethered to a user’s mobile number and all messages are stored locally on devices, rather than on remote servers, syncing and accessing WhatsApp across devices poses something of a challenge. WhatsApp Web allows users to message from their desktop computer, but by essentially mirroring their mobile device — one can’t work without the other. Moreover, WhatsApp Web lacks many of the features of the mobile app, such as voice and video calling.

Achieving true multi-device support — without compromising security — would be a big game changer for WhatsApp.

With at least 1.5 billion users (likely many more, given that Facebook stopped providing updates two years ago), WhatsApp is now thought to be Facebook’s biggest property. In fact, Sensor Tower data suggests that WhatsApp is often the most downloaded app globally in terms of first-time installs. But for those who regularly change devices, operate multiple devices, or are trying to wean themselves off the constant distractions smartphones are known for, the inability to seamlessly switch WhatsApp between devices is an issue.

Throughout 2019, perennial WhatsApp pontificator WABetaInfo has scoured beta releases and their underlying code and concluded that WhatsApp will soon allow users to access their WhatsApp account on multiple devices at the same time.

There isn’t a great deal of evidence to suggest that this will happen, and it’s not entirely clear to what extent second or third devices would be able to use WhatsApp independently from the main device. One indicator that WhatsApp is working on true multi-device support, according to WABetaInfo, stems from a new security feature the app is implementing. Whenever someone tries to register a new device to a WhatsApp telephone number the app sends a push notification to the original device, informing the user that a registration code has been requested, and a warning flashes inside WhatsApp itself. 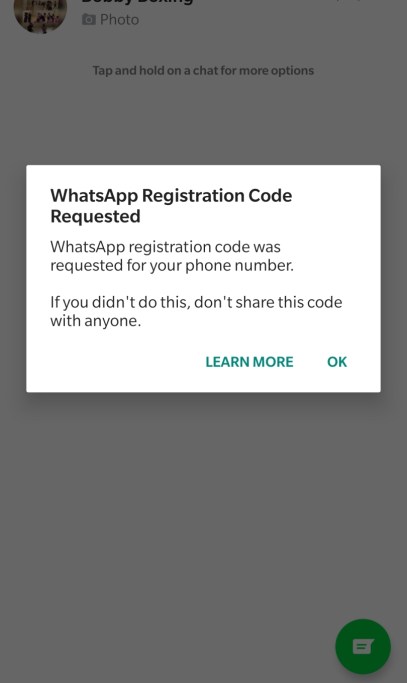 Normally, when you enter the registration code for WhatsApp on a new device, you are automatically kicked out of the app on the original device. WABetaInfo is adamant that this new notification system is more than a simple security measure and will in fact allow users to link more than one mobile device to a single WhatsApp profile. If this is correct, it would mean that in future when you enter your authorization code on a secondary device, you won’t be kicked out of the original device.

It’s difficult to understand how exactly this would work without fundamentally changing the building blocks of WhatsApp. Rival messaging app Telegram, for example, allows users to access their chats on multiple devices, but Telegram stores users’ messages in the cloud, which makes synchronizing between phones and tablets a little easier. It’s also worth noting that Telegram chats aren’t end-to-end encrypted by default (it offers a separate Secret Chats feature with this functionality).

According to WABetaInfo, WhatsApp is developing a new method that would permit it to retain its end-to-end encryption while also allowing people to use their WhatsApp account on different devices at the same time.

As previously announced, WhatsApp is developing a feature what will allow to use your WhatsApp account on more devices at the same time. Chats will be still end-to-end encrypted because WhatsApp was developing a new method to assign keys to specific devices.

The bottom line is that WhatsApp may or may not be working on supporting multiple devices, but if it is, we simply don’t know what form the functionality will take. It’s clear that users won’t be able to pull historical chats onto new devices without manually transferring them over, but the company could feasibly be working on something that would sync all chats after a new device has been added. Or it might simply be a case of being able to “link” the main WhatsApp phone with multiple other devices, similar to privacy-focused messaging app Signal, which launched an iPad app earlier this week.

Smartphones, and the “always on” connectivity they enable via the likes of Slack, Gmail, Twitter, Instagram, and Facebook, are increasingly being blamed for a decline in mental health. Such reports have not been lost on the big technology companies, with Apple and Google integrating digital well-being features into their respective mobile operating systems. But such features don’t really get at the root of the problem, which is why we’ve seen a steady rise in stripped-down, minimalist phones targeted at those looking to switch off.

The problem is people have come to rely on smartphone features like maps, ride-hailing services, music-streaming, cameras, and messaging services, which makes switching off something of a challenge. It’s possible to set up a secondary phone that is limited to Google Maps, Uber, and Spotify, but this plan falls apart because it’s difficult to switch WhatsApp between devices — you can’t just flip a switch.

WhatsApp has come a long way over the past 10 years, and for billions of people it is the default way to communicate with friends, family, and work colleagues. But given that many of us communicate using multiple devices — from PCs to phones, watches, and tablets — WhatsApp would be infinitely better if it could find a way to support our multi-device world.