An estimated 192 million U.S. consumers — or 70% of Americans ages 13 to 64 — play games, according to a new Consumer Technology Association (CTA) study.

The numbers mark a big demographic shift that has happened over the past decade, marked by the rise of smartphones and the dwindling of the population of older Americans who grew up without playing games.

While traditional gaming platforms still hold strong interest, the emergence of live game streaming services is turning gaming into a connected and social experience, said the CTA, which puts on the Consumer Electronics Show (CES) in January. A separate study released by the CTA examines the trends in the esports ecosystem and highlights growth in viewership base and brand engagement. (I’m going to moderate a session on brands and esports at CES 2020 on January 8.) 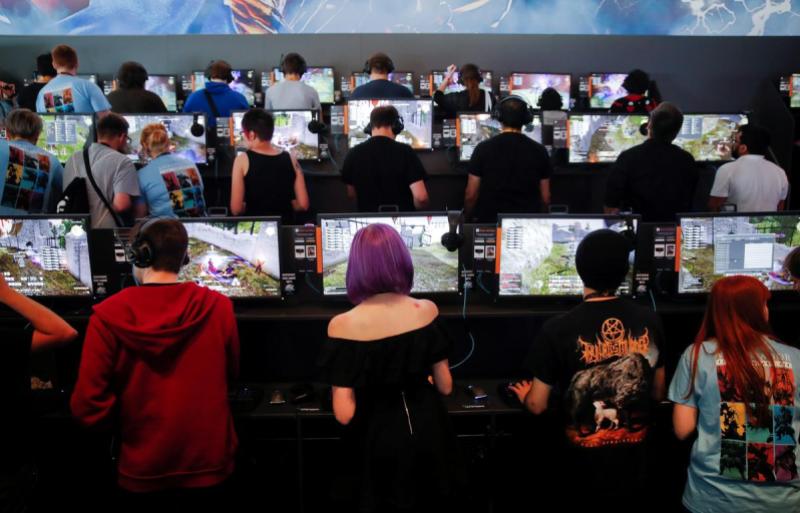 Above: People play video games during the opening of the world’s largest gaming event at Gamescom in Cologne, Germany.

The first study, 2019 Future of Gaming, defines gamers as those who played video games at least one hour over the past three-month period. Of those 192 million gamers, 94 million primarily play on gaming consoles such as Xbox One or PlayStation 4, 66 million on a smartphone or tablet, and 22 million are devoted PC gamers.

“Gaming is the foundation of a much broader engagement between consumers and the industry today, one that mirrors TV entertainment and even professional sports,” said Lesley Rohrbaugh, director of research at CTA, in a statement. “While it’s still only a pastime for some, gaming represents an active social channel for a growing number of consumers — they see gameplay as just one part of a much larger entertainment experience.”

More than 60% of gamers now play games with or against others online, including 40% with or against people they don’t know, the study finds. Regardless of the gaming platform, some of the top reasons for playing video games include relieving stress and boredom, escapism, competition, and sense of achievement. In addition, 77% of the gamers think video games will be more social in the next five years.

The second new study from CTA, Esports 2019: Landscape & Opportunities, finds that esports — a form of professional competition organized around video games with live broadcasts and cash prizes for competitors — will witness a steady growth in fans in the U.S. over the next few years, increasing from 21 million people in 2018 to 27 million in 2022. The global esports viewer base is estimated to grow from 355 million in 2018 to 674 million in 2022, nearly a 90% jump.

According to the study, the number of esports investment deals jumped substantially in 2018, attracting capital from venture capitalists, private equity firms, wealthy individuals, traditional sports teams and corporate investors leading to a total investment of $4.4 billion globally. Across the globe, esports are expected to see faster growth opportunities in newer markets – Russia, Brazil and countries in Europe and Southeast Asia – compared to the U.S. and China, the study notes.

“Fans of esports are a coveted group for brands – especially given the rapid growth in audience and events, and the appealing viewer demographics,” Rohrbaugh said. “From gaming gear to sports drink companies, we’ve seen many gaming-related brands as early sponsors of esports. But over the last two years, we are seeing a range of other sponsors, ranging from financial and educational institutions to automakers, start to embrace esports. Going forward, these non-gaming related brands will be the driving force of sponsorship revenue for the esports industry.”

At CES 2020, esports industry experts from Samsung, United Talent Agency, VentureBeat, and others will discuss important trends in the rise of the industry, and explore its effect on emerging technologies such as 5G, artificial intelligence and augmented and virtual reality. Esports and gaming industry exhibitors will include AMD, Dell Inc., HyperX, Logitech, Razer and more.

The 2019 Future of Gaming study represents findings from a quantitative survey administered via internet to an online sample of 2,047 U.S. consumers (ages 13-64) who played video games on any devices (consoles, computers, portable gaming devices, mobile devices, etc.) at least one hour during the past three months. Survey data was collected between September 13 to September 20, 2019.