GamesBeat: These content creators themselves are becoming stars. They get to model behavior. They get to deal with toxic behavior in others. They get to teach others how to behave online. That’s been very interesting.

Lin: It’s an interesting point. A lot of folks, if you’re interested in streaming — what a lot of people don’t think to do is they do have to network with each other. There’s a lot of giving back in the community. All these big streamers we have, they drive a lot of the traffic on the site for sure, but what they try to do is play with other streamers. They try to lift up other content creators and help them grow, help them reach a new audience, which is really cool. You don’t necessarily see that in the entertainment industry. That’s something we encourage.

GamesBeat: The top 50, have they reached a point where they’re all these big stars? Do you foresee a lot of competition for those top streamer spots? Is Microsoft going to try to raid some more people that way? Or is that even going to matter? Do these entertainers have such large followings that they can make or break a platform?

Lin: It’s interesting. So far, a lot of the early data shows that it didn’t really have too much of an impact for Mixer, unfortunately. For us, we have up and coming streamers all the time. A lot of people are just part of Twitch as a culture. Twitch as a platform is a culture, a community. A lot of folks have made friends there. They watch multiple streamers. They tend to stick.

But we don’t know where this is going to go. We’ve always had competition in the space. Now it’s obviously getting more aggressive. A lot of people are trying to figure out how to capitalize on the space. To stay ahead we have to innovate. We have to make sure we treat our partners the best way we possibly can. We need to help new, up and coming streamers grow, and help new people become streamers that weren’t before.

We’re trying to build tooling at all levels of that. How do we help streamers network with each other, play with each other? We built something called Squad Streaming, so you can do side by side video players. Instead of just playing with them and pushing people to the other stream, they can pull both streams into their channel and promote them that way. We do hosting. We do co-streaming.

Above: TwitchCon 2018 drew thousands of people to San Jose, California.

GamesBeat: Streaming is evolving from what it was. It’s becoming more of a two-directional thing.

Lin: A little bit, yes. Traditionally it’s been broadcast, one to many. But now you’re starting to see — again, we try to find the behaviors and get the feedback from our creators about habits they’re starting to build to develop their streaming careers and grow their channels. We turn those into products to make their lives easier. That helps a lot in terms of that streamer networking and the cross-growth we see.

GamesBeat: As the steward of the platform, what do you have to think about to not screw this up?

Lin: It’s a tough one. We’ve always had a good line out with our creators. We pride ourselves on the relationships we’re able to build. We take care of them. We spend a lot of them talking to them about their careers – not just on Twitch, but also how to use other platforms, how to think about budgeting for their lives, how to think about what other things they can do. Do they want to do sponsorships, influencer things? Do they want to become esports talent or appear at gaming conventions? We try to help them expand their careers outside of just streaming.

GamesBeat: Esports and Twitch seem to be symbiotic in a lot of ways, but it’s not a huge part of your audience, right?

Lin: We love esports. It’s a big part of the genesis of Twitch. We care a lot about the healthy growth of the industry. But if you look at just esports leagues, it’s only about 10 percent of our traffic. There’s that much more content, all this long tail content. There are about 500,000 people streaming every day, remember. A lot of the long tail content has less than 50 concurrents, these highly engaged small communities that are built around the nodes that are our streamers. Then you see the folks at the top, esports pros or personalities like Dr. Disrespect. You see this huge middle and then the long tail.

It’s really about giving them tools. We’re also starting to expand. A lot of the feedback we got from streamers a couple of years ago led to that category we called IRL, hearkening back to the early Justin.tv days. They weren’t streaming gaming, but they were walking around gaming conventions. They were doing travel shows or other types of content. We’re starting to relax those rules around just streaming games, and we’re seeing people do all kinds of things with the platform.

GamesBeat: As parents, should we let our kids quit school to stream or follow esports?

Lin: Like any other job, it’s a huge commitment. You can’t just be the best player in the world and turn on a stream and it automatically works. You have to engage with the audience and spend a lot of time being — a lot of it is about reliability of content. It’s about scheduling yourself and making sure your audience knows when you’re going live. A lot of these big streamers are streaming every day, many hours a day. It’s hard to draw a line. Because of the way revenue on the site works – it’s advertising and subscriptions – you have to make content to make money.

That’s something we think about a lot as well. How do we help our creators have better balance in life? But it’s not so easy. There’s a lot of people trying, 3 million every month. It’s not as simple as, “Hey, mom, dad, I’m going to become a streamer.” It takes a lot of effort.

GamesBeat: I’m curious about how many streamers out there in the world make a $1 million or more a year. Everyone’s guesses would be interesting there.

Lin: We have several monetization streams – advertising, subscriptions, Bits – so a lot of it is this patronage mechanic. It’s free content, but people still subscribe because they want to support the streamers. They have their entertainers of choice, and they want them to be able to build a career on that. Those are the main monetization methods that happen on our site. 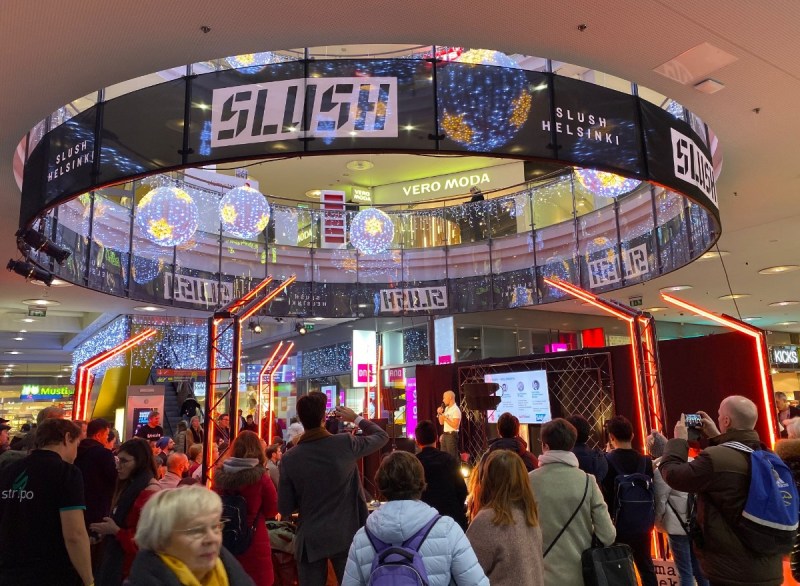 Above: Slush talks on a side stage in a shopping mall.

GamesBeat: There are some interesting questions about what’s still to come. What is your vision there? YouTube had an interesting notion where you could put a link out there, someone could click on it and jump right into a live cloud gaming experience on Stadia. That sounded great, but Stadia is here now, and you can’t do that yet. Still, I wonder, does that give a glimpse of what’s coming in the future, or are there other things you’re looking forward to?

Lin: I think so. That’s something we’ve thought about for a long time. Like I mentioned earlier, it’s behavior that we already see. Streamers play games with their fans, so how do we make that easier? The promise of cloud gaming does make that super easy. That’s one thing.

What happens next after that, though, is that games can be developed with that concept in mind. Not just the individual player or multiplayer, but now you have this audience, this whole group of people that you weren’t necessarily thinking about before as you developed a game. I think you’re going to see a lot of innovation there. There’s been a few games that have come out in the past, kind of like the Hunger Games, where the audience could vote with dollars to impact what’s going on in the game – whether a health pack shows up for your favorite player, or parts of the map suddenly disappear or go up in flames. Extrapolating from that concept, where the audience can have an impact, that’s going to be really interesting. Lots of game companies have been thinking about this problem for years, and you’re going to start seeing some of these games come out soon. That’s going to spur a whole evolution of a new style of game development.

Beyond that, we’re trying a lot of other adjacent categories, like sports. We work with the NBA and the NFL. The way we’re approaching these things is not to just take the same TV feed and put it on Twitch. We want to give our creators the opportunity to create content around this stuff themselves. We take a naked feed from the NBA D-League or NFL Thursday night football, and our partners actually become the commentator, talking over that content for their audience. Not only is it introducing that content to the creator’s audience – and many of them haven’t watched sports in a while – creating that good crossover, but it also gives them something fun to do, something more relaxing. You’re not actively playing a game. It’s a chance to break for a little while and do something new.

So far, so good. These projects have been super fun. We’ve done this with TV shows as well, like Mighty Morphin Power Rangers and Pokemon. The audience seems to really like it.

GamesBeat: 5G is coming. Is that going to give you a chance to crack into mobile?

Lin: Mobile is something we’ve been thinking about for a long time. Within the last couple of years, we’ve picked up games that have long play sessions. We tried to do mobile game streaming way back in the day, but it was too early. Game sessions were just too short, sub-10 minutes. It wasn’t enough time for a live streaming experience. It was fine for on-demand, but it didn’t work for us.

Now people are playing the kind of games I mentioned – Free Fire, PUBG Mobile, Arena of Valor – for hours and hours. That works really well. It’s not easy to stream from mobile, but when 5G comes out, it’ll be very easy to do both, to play a game with high graphics quality on your phone and stream to a platform like Twitch. We just need to make it easy. Right now you have to plug your phone into your PC and still run all your PC software to stream. We need to make that easier.

GamesBeat: The next milestone is that we’ll all get paid to play games.

GamesBeat: It’s your job to make that happen.

Disclosure: The organizers of Slush paid my way to Helsinki. Our coverage remains objective.