Released in September by recently founded developer Owned by Gravity, Fantasy General II is equal parts sequel and homage to the original 1996 game from the since defunct Strategic Simulations, Inc. (SSI). It’s a unique, narrative-driven modern spin on the turn-based strategy game genre, where every choice you make has consequential knock-on effects throughout the remainder of the game’s campaign.

Much like its predecessor, Fantasy General II is a hex-based game in a fantasy setting. This time around, you play as the Viking Falirson, on a mission to unite — by force, if necessary — the various tribes and attack an assertive, distant Empire. It improves upon the classic war game experience from Fantasy General, layering it with new mechanics and more complex decision making opportunities, but largely staying respectful of the franchise’s successful roots.

The original Fantasy General was reasonably well reviewed in its day, scoring 78% on PC Gamer, but earning five (of five) stars from Computer Gaming World. In a 1997 interview with GameSpot, SSI claimed Fantasy General (and all of its other Panzer General games) sold at least 50,000 copies – not an enormous number, even for its day, but still sizable.

Publisher Slitherine Software supported this project, in large part because it’s an obvious fit for their specific portfolio. Slitherine has published over 200 strategy and war games across PC, console, and mobile platforms alike. Historically, they’re best known for some of their early 2000s PC entrants in the genre, like Spartan and Legion Arena.

To learn more about Fantasy General II and its future, I talked with Owned by Gravity managing director Jan Wagner, whose nearly 30-year tenure in the games industry has spanned everything from design to production, including involvement on projects ranging from Diablo II and Warcraft III to SpellForce 2 and Gothic 3. In addition to answering my questions about the borderline necromancy they performed to revive the Fantasy General franchise, Wagner also opened up about some previously unrevealed plans for Fantasy General II’s future.

A long time ago … 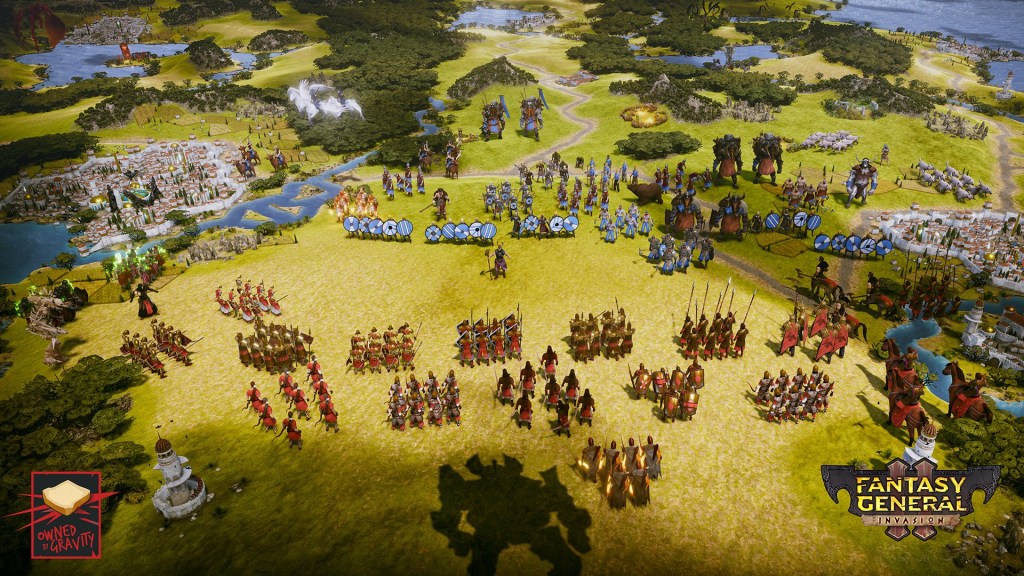 To answer the simple question of what Fantasy General II is, Wagner says they intended it to be a successor to the original Fantasy General. “When [Fantasy General] hit its 20th anniversary, a bunch of us got together and played it, and it held up well,” says Wagner. “But there were things we imagined would be in the game — narrative, story, etc. — that weren’t there the way we remembered. So we sat down and said, what would a modern version of this look like?”

What that modern version would end up becoming, in Wagner’s opinion, is something more accessible, but that takes every element of the original to the next level.

I found that to be the most interesting thing about our entire conversation — the question of resurrecting the Fantasy General franchise 23 years later kept coming up. Wagner’s position on releasing a sequel was interesting: “I’m of the generation that played the original (Fantasy General), and I find myself increasingly … I wouldn’t say ‘bored’, but there isn’t a word for ‘under-challenged’.” His contention, fundamentally, is that most contemporary games don’t provide meaningful challenges for players. “You can’t challenge the player above their ability,” Wagner explains. “Games have gotten a little scared of challenging players. I remember those challenges fondly.”

The choice to follow-up Fantasy General specifically, though? Almost pure coincidence. “There aren’t a lot of turn-based games around! They have been undervalued for a long time; 3D and real-time made them seem obsolete,” Wagner contends. He also goes on to say that turn-based games have some inherent advantages: “The time it takes me to get into a real-time game and learn everything to be competitive takes a lot of work. Mastery involves a lot of time spent. They challenge me on the keyboard, not in my brain.” For Fantasy General II, specifically, Wagner also acknowledges that its turn-based nature allows the narrative to thrive, since the player isn’t always “glued to the immediate action.”

I have to admit that I wasn’t familiar with the original Fantasy General or the Five Star series prior to Fantasy General II — but Wagner says many of their players came to them by way of franchise recognition. “More than we thought,” he says. One of his interesting beliefs, however, is that the quality of the players that are attracted to their games outweighs the quantity. The lengthy hiatus of the franchise also helped them, after a fashion. “A lot of players had the same issue we did — they fondly remembered, but they didn’t exactly remember,” Wagner says. “If we were the successors to a game from two or three years ago, more direct comparisons would get drawn.” He says the passage of time ‘mellowed’ those memories, but that engaged players were still very vocal about keeping certain notable features.

Sticking with the Fantasy General brand came with pros and cons. “We really tried to be true to what we thought the original game was,” Wagner says. “That allowed us to identify core concepts to keep, but also things we specifically wanted to improve.” One of the challenges, however, was simply scope. “There were over 250 units in Fantasy General, because they were all 2D sprites without intense animation. In 3D, that’s really expensive. We had to cut down,” he says. Overall, though, he feels like they’re left with a great “recipe” to improve on.

PC strategy games in an age of mobile

For players like myself who weren’t familiar with the series, I asked Wagner what he’d compare Fantasy General II to — and who should try playing it. “People that like complex games like Civilization, Banner Saga, or Darkest Dungeon,” he says. “It’s a little different because of the perspective, but the main elements — having a challenge, optimizing — are similar.” He acknowledges that the team thought they might attract an older audience — people who knew the original game, war game players, etc. — but their demographics are trending younger.

“We have a relatively high number of younger players who came up on mobile games, but are now looking for something that has a little more depth,” Wagner says. “They’re used to the concepts of turn-based games, and they don’t necessarily expect immediate reactions from systems.” His primary contention is that lots of great tactical games exist in the mobile space, and those players are converting over time. “I’d never imagined this angle,” he says. “Some people are scaling back from more hardcore games; some are scaling ‘up’ from a mobile background.” 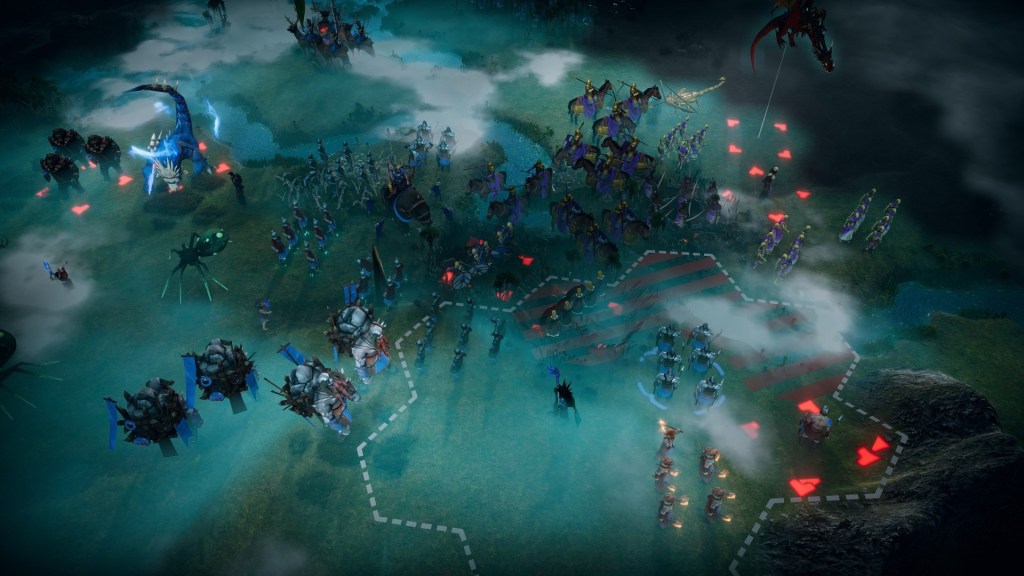 Above: The undead make for good troops.

Distinguishing Fantasy General II from comparable titles was easy for Wagner. “One thing that’s really important for us is actions and consequences,” he explains. “A tactical game should have decision after decision. We carry those decisions over into the story, so they’re quite consequential – without necessarily being ‘good’ or ‘evil’. You’re playing as Barbarians raiding villages – that’s not the nicest thing to do, or very heroic, but it’s a part of the culture you’re in!”

After a few sessions with the game, one of my first takeaway notes was that it felt like it would play well on mobile or console. My ever-prescient notebook did not disappoint:

“We do have a console version planned,” Wagner confirmed to me. “There are a lot of traditional JRPGs on console that are doing quite well. Players are used to these types of control schemes. The way we present information to you have multiple layers.” Combined with the combat previews and other in-depth information being accessible, but not constantly presented on-screen, the UI absolutely feels like it will work beautifully on consoles. The Xbox One and Playstation 4 versions of Fantasy General II are coming in 2020, and will include all of the content from the PC game.

Owned by Gravity and publisher Slitherine had also previously announced plans for additional expansions to Fantasy General II, which I was able to learn a little more about. The Fantasy General world had five continents, and the entirety of the base game in Fantasy General II takes place on only one of them. Wagner says that beyond additional environments, they also want to diversify their gameplay experiences with more factions and extending the storyline. Their first expansion, Onslaught, is due out on PC in early 2020, and will introduce aerial units, a procedurally generated campaign system to add replayability.