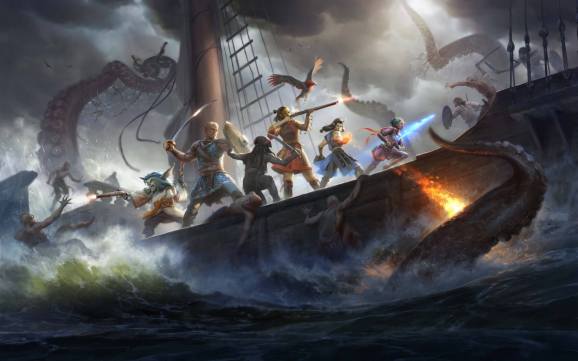 Publisher THQ Nordic announced today that Pillars of Eternity II: Deadfire will be available for PlayStation 4 and Xbox One on January 28.

Deadfire is a role-playing game from Obsidian that came out for PC in May 2018. It’s one of the last titles Obsidian made before Microsoft bought the developer in November 2018.

Before Obsidian had all of that Microsoft money to play with, the studio went to crowdfunding site Fig for Deadfire. The game raised a massive $4.4 million, well above its $1.1 million goal, making it the most successful project in Fig history. It became part of an RPG revival on PC, along with games like Divinity: Original Sin and its sequel. Many of those PC RPG hits later found their way to consoles.

Our review praised the PC version for its strong characters and interesting multiclass system. The console version includes all of the downloadable content Obsidian created for the game. However, Obsidian noted that sales of the game were low, making a third entry in the series unlikely.

After Deadfire, Obsidian released the first-person RPG The Outer Worlds this October. The developer is now working on its first project for Microsoft, the backyard survival game Grounded.