Day three of Qualcomm’s 2019 Snapdragon Tech Summit is a big one for mixed reality — VR, AR, and XR — thanks to the introduction of Snapdragon XR2, the world’s first 5G XR platform. While XR2 might sound like a sequel or replacement for last year’s XR1, the platforms actually are meant to sit next to each other, giving OEMs the choice of chips to power “simple” or “smart” VR/AR headsets.

But as Facebook’s choice of Snapdragon 835 for the standalone Oculus Quest VR headset and Microsoft’s use of Snapdragon 850 in the standalone HoloLens 2 AR glasses demonstrate, Qualcomm’s XR offerings are more complicated than that. So I went straight to Qualcomm’s XR chiefs — VP Hugo Swart and head of XR product management Hiren Bhinde — to discuss the past, present, and future of the company’s mixed reality offerings.

We covered a lot of ground. Here are some of the juiciest excerpts from our discussion, lightly edited for clarity.

I asked Qualcomm what we should expect physically from the next wave of Snapdragon-based XR viewers, and the answer was fairly straightforward: USB-C tethering via unfancy (read: short, non fiber-optic) cables to smartphones, with some offering PC connectivity or standalone modes. When 5G networks are ready to support fully wireless XR viewers, Snapdragon XR2 will be an option for headset makers. But what about high-bandwidth Wi-Fi links between headsets and rendering devices?

“Now, there’s always the question, when will smartphones all have 802.11ay as well? Wi-Fi 6 may suffice for a given set of use cases, but for others and for a more optimal experience, 60GHz will be desirable. So you could start seeing these two tiers of wireless connectivity. You will hear a more prescriptive plan on this throughout 2020.”

Hiren Bhinde: “Today, what we’re trying to do is ensure that end users and OEMs get all the scalability and experience with this device connectivity and USB-C. We’re going with the market that is in everybody’s pocket, based on 5G. But we are also keeping a processor [in the headset] for pose detection at the end. The phone is the rendering device. The headset is the perception device. So when you’re sending the frames to the display, the post correction can happen in the headset. You realize the extreme importance of that for asynchronous time work to happen on the glasses. That’s one of the challenges that we see that the smartphone will help address.”

On the timeline for real 5G Snapdragon XR2 headsets

If Snapdragon XR2 is the world’s first 5G XR platform, what are users going to see first — XR2 headsets with wired connectivity, Wi-Fi connectivity, or 5G cellular capability? According to Swart, the answer depends on how quickly OEMs and carriers execute on their plans.

Swart: “Wait for the details on the [Wi-Fi] viewer to be given in 2020. I think we all agree this is where it’s going. But I almost see it as a ‘crawl, walk, run’ situation. I think the ‘run’ is when the glasses have 5G, and [carriers] have mobile edge compute (MEC). Then they’ll have that level of split [processing].”

Swart: “I don’t think it’s that long. I think it’s probably that long for mass consumer [adoption], but our Snapdragon XR2 reference design already has 5G embedded. It has 5G, and actually also has 60GHz Wi-Fi. We will be enabling Boundless XR for 5G in 2020 with the reference design. So I expect trials, and I expect pilots with operators then.

“Now when will they actually commercialize these devices? Well, I think it’s going to be a combination of which OEM is going to be first with a 5G version, operator readiness in terms of 5G coverage, and MEC capabilities. But from a technology perspective, and from a headset perspective, I can do it in 2020.”

On Snapdragon XR2’s roles in VR and AR headsets, consumer and enterprise

What sorts of devices will XR2 power? Last year, XR1 initially seemed as if it might wind up in lots of VR and AR headsets, but as a fairly basic XR solution, it’s mostly settled into enterprise AR glasses and some Asia-only VR headsets.

Swart: “We’re targeting everyone. The question is really what comes first, and what comes later? I definitely see consumer interest. I just can’t talk about the OEMs. But no doubt we’re gonna see consumer AR. Niantic is an example of consumer AR. I think Niantic will [fit] like a glove right on the hands of the [cellular carriers].

“And in VR, we’ll definitely have traction in consumer devices. We’re gonna see a lot of traction in general, but in particular through this partnership with carriers.” 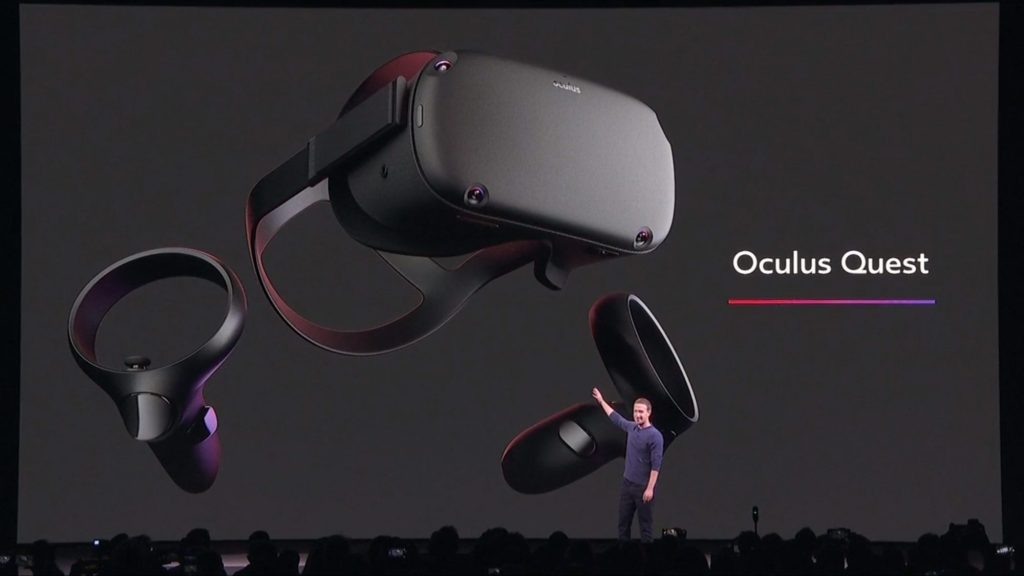 Above: The Oculus Quest is a VR headset based on Snapdragon 835.

Bhinde: “If you look into the rearview mirror with Snapdragon 835, we introduced it as a consumer-based device. We knew there was going to be some enterprise traction, but how the world’s changed in the last two years, its scaling into the enterprise sector was unprecedented. Now we have a better understanding of what’s required in AR, in VR, in enterprise, and in consumer.

“XR2 works across them. Consumer VR, it’s a no-brainer. We’ve covered that market. Heavy rendering, high GPU capabilities? That’s a no-brainer, we’ve got that covered. AR? AI? AR requires less from the GPU, more of AI. XR2 has it. There’s abilities to maybe shut down a couple of cores, do interesting things using AR. It requires a chip that has the AI capabilities that we don’t usually offer anywhere else. That’s exactly the reason why Niantic is interested in looking at this whole thing. If you have viewers, smartphones, et cetera all coming together, [XR2] is where it happens.

“Then the last is enterprise. For enterprise, form factor is not necessarily the key requirement — no sexy, sleek looking glasses. What’s really important is longevity, graphics, power, performance, security and privacy. All those factors are also very well established.”

Apple is well-established to be working on iPhone-tethered AR solutions, and they could be either just AR glasses or a combined AR/VR headset. Right now, Qualcomm’s XR initiatives are all but unchallenged, since there aren’t many companies capable of making XR chips, or establishing an ecosystem large enough to make sense for consumers. But once Apple enters this market, they’ll make a dent simply by offering a complete platform with plenty of eager customers waiting to buy apps. What’s Qualcomm’s strategy once that happens — attempt to adapt to whatever they’re doing? Or is there a roadmap of products that stretches out beyond whatever Apple’s offering is?

Swart: “From what we see in the media about their product, we believe that XR2 is going to be a very, very competitive product. In between AR and VR — what we’re calling true mixed reality — is core and center to the value proposition of XR2. So with low latency see-through capability, you can go all the way from 100% virtual to 100% augmented reality to something in the middle, mixed reality.

On the future of Snapdragon XR chips

I asked Swart and Bhinde what was next for the Snapdragon XR chip lineup, picking up on a reference to something beyond XR2 that wasn’t XR3, but rather “XR2 Gen 2.”

Swart: “Will we ever need an XR3? I don’t know. Right now, I see the two tiers as enough for where we are in the market. When you start going to tens of millions of units, or 100 million, maybe I’d need three or four tiers. Today, I think two is enough.”

I asked whether the next generation XR2 would merely be smaller and more power efficient. Swart explained that the goal is to take algorithms developed for XR2 and harden them into future chips, increasing efficiency and performance. Those future chips, Bhinde said, would more likely be Gen 2 and Gen 3 versions of the XR2 than an XR3.

For more information on the Snapdragon XR2, check out details from the full reveal earlier today.