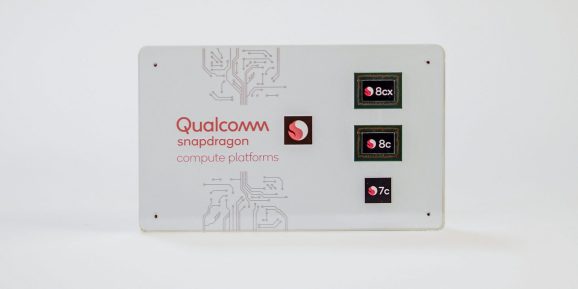 When Qualcomm announced a dedicated processor solution for laptops in 2018, the company said the Snapdragon 8cx would offer OEMs not only the world’s first 7-nanometer chip for Windows PCs, but also continued advancements on a “smartphone pace.” One year later, Qualcomm is introducing two new 8cx siblings — the Snapdragon 8c and Snapdragon 7c — though as their names suggest, they’re here to make Qualcomm PC chips more diverse with “various price points,” not move the platform forward.

It’s worth noting up front that Qualcomm previously offered high-end smartphone processors to Windows laptop makers, later positioning the Snapdragon 8cx as an “extreme” computer-focused alternative to the Snapdragon 850 with Intel Core-caliber performance. Today’s announcements keep the 8cx at the top of the line, while the 8c is a step down — but still better than the 850 — and the 7c is closer to the company’s 7 series mobile processors.

The lowest-end chip, Snapdragon 7c, is designed to bring up to twice the battery life and 20% better system performance to entry level laptops, as compared to budget Intel or AMD machines that deliver 6.5-hour battery life for Wi-Fi browsing. Qualcomm notes that cheaper laptops tend to be fairly heavy (5 pounds) and thick (21mm), in part due to big fans, which the 7c will eliminate. This chip includes an eight-core Kryo 468 CPU, an Adreno 618 GPU, and an AI Engine with over 5 trillion operations per second (TOPS), as well as a Snapdragon X15 LTE modem for always-on connectivity.

By comparison, the Snapdragon 8c promises 30% better performance than the Snapdragon 850, including a 6 TOPS AI Engine, plus multi-day battery life. Like the 7c, it will achieve this performance without the need for a fan, enabling the laptop to be thinner and lighter than most Intel Core CPU-based laptops. The 8c steps up to a 2Gbps Snapdragon X24 LTE modem for superior cellular performance.

Qualcomm is now positioning the Snapdragon 8cx as an Enterprise Compute Platform, including connected security software and additional system-level optimizations that will eke out additional power from the processor. A 5G version of the 8cx is expected to be included in Lenovo’s Project Limitless laptop in 2020, while the Samsung Galaxy Book S includes the standard 8cx with the X24 LTE modem.