From my perspective, attending this year’s Snapdragon Tech Summit was all but mandatory for a journalist covering 5G: It offered the very first opportunity to go hands-on with low-band (600MHz) 5G, and the first looks at the chips that will power many of 2020’s most powerful 5G devices. Qualcomm revealed the Snapdragon XR2 5G, a chipset that will power standalone 5G VR and AR devices, as well as new Snapdragon chips for ultra-premium and midrange smartphones, plus entry-level and midrange Windows PCs.

I was genuinely impressed by all of the new offerings, as well as Qualcomm’s competitive undertone during the keynotes. By the end of the third day’s keynote, it was targeting laptop OEMs with more power-efficient, AI-capable chips than Intel, and willing to call its rival out on its still stunning inabilities to make 7-nanometer CPUs or consistently supply older-process parts to customers.

But as its processors attempt to supplant Intel’s across multiple product categories, Qualcomm faces a unique challenge: The success of its ambitious and sometimes visionary chips ultimately depends substantially on the execution of partners — OEMs and cellular carriers. Put another way, it can show off a half-dozen new CPUs and two dozen awesome features at the Snapdragon Tech Summit, but who knows whether and when consumers will actually be able to buy products with those features?

This is the inverse of Apple’s situation. Apple doesn’t say a word about its own (or partner-provided) new chips until they’re actually inside shipping products. When it says it developed the first 64-bit mobile processor, bam — you can buy it 10 days later. If it creates a new wireless audio chip for tiny earphones, or a new system-on-chip for watches, you learn about them when hero products are literally en route to stores. Unsurprisingly, people respond enthusiastically to this approach, and they reward Apple by rapidly adopting its new technologies.

Over the course of three days of keynotes and more demos than I can count, I learned about what we’ll be seeing in a wide variety of exciting Snapdragon-powered products slated for 2020 and beyond. Some examples: 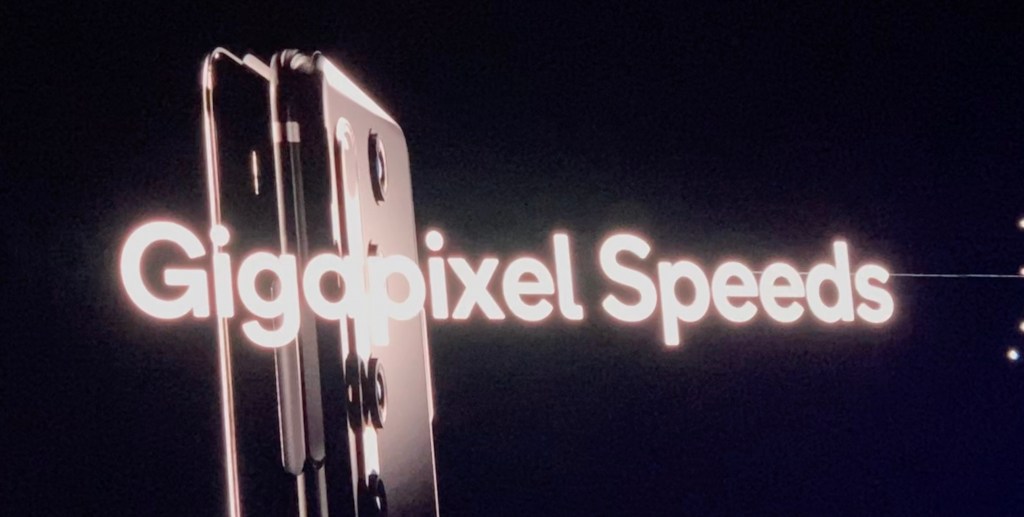 Smartphones with super cameras, backed by incredible 1-2–gigapixel bandwidth and super fast image processors. New Snapdragon chips will support up to 200-megapixel still images, 8K video recording, and Dolby Vision 4K HDR video. But beyond using the new Snapdragon chips, Qualcomm’s OEM partners will need to source the right image sensors, and be sure that their Camera apps handle all that data quickly, and so on. There are a lot of moving pieces that need to work together properly, but if they do, next year’s phones will deliver stunning photography and videography.

5G devices for AR/XR, enterprise conferencing, industrial applications, desktop-quality gaming, and beyond. Lots of companies are working on Snapdragon-powered 5G devices — Qualcomm says over 230 devices are either available or in the works. But they’ll depend on carriers and/or companies’ private 5G networks for the necessary 5G infrastructure. 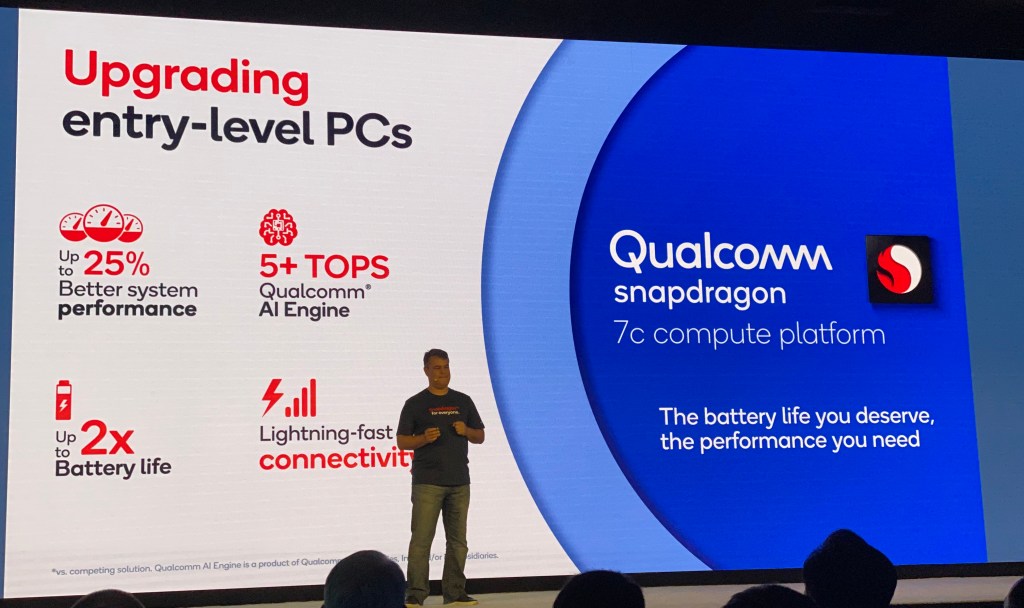 Also intriguing: Budget-priced (sub-$500) PC laptops with Gigabit LTE connectivity and midrange laptops with 5G. The sleeker form factors and AI processing capabilities reach users across particularly price-conscious markets, including education. It’s unclear at this point which PC OEMs will actually be making these machines, but Microsoft’s backing the program with Windows 10, which counts for a lot.

Then there were demos of next-gen technologies that feel like they’re on the cusp of being released (and viable), but which still need bug testing and more polish. Nreal, whose Light AR glasses will sell for $500 next year, is in the process of signing up carrier partners including Japan’s KDDI/Au and Germany’s Deutsche Telekom for consumer and business uses. The glasses depend upon smartphones with Snapdragon 855 or later. 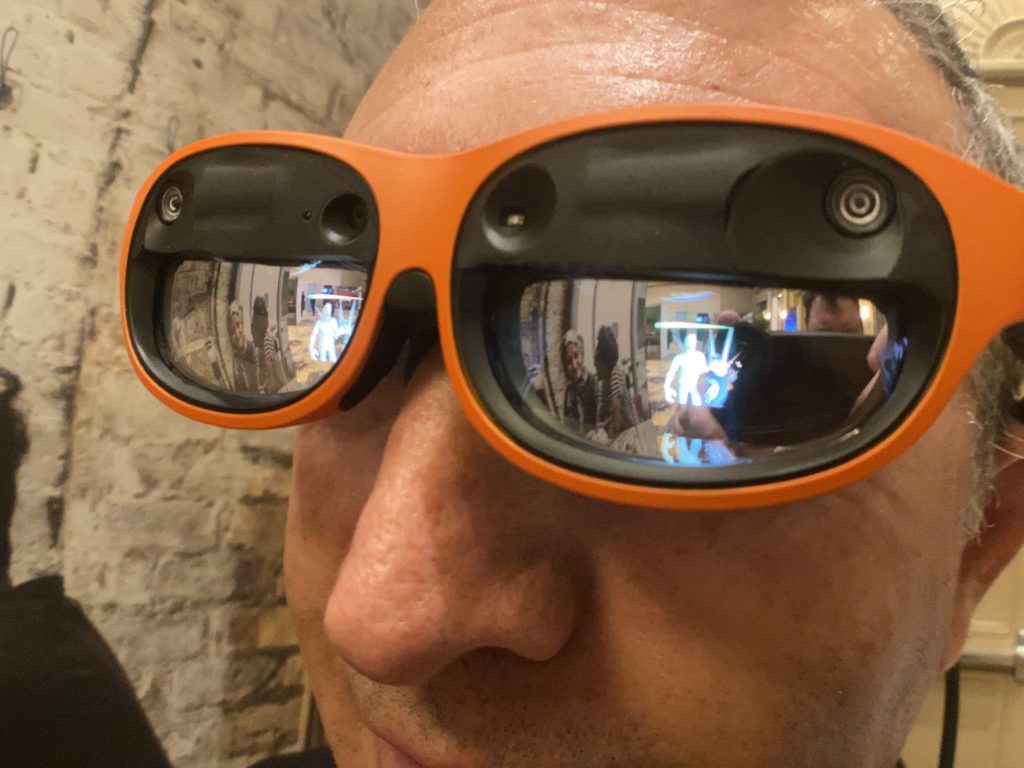 The good news with Nreal Light is that when the glasses work, they’re delivering surprisingly compelling 3D visuals that look like bright holograms you can walk around in the real world. I was able to view complex 3D architectural models, a dinosaur skeleton, complex machinery, and other objects that looked better than I’d expected from a mobile device’s rendering engine. But a combination of connectivity and other demo glitches marred the experience for me. Most likely due to the software, the glasses don’t yet seem ready to ship.

And that’s the rub. I’m 100% convinced that attending Qualcomm’s Snapdragon Tech Summit this year let me see and experience the future of mobile technology. But whether the execution from Qualcomm’s partners ultimately lives up to the impressive capabilities of its new chips remains to be seen.