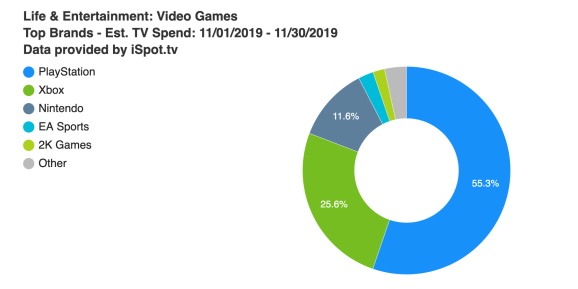 As the holiday season arrives, the gaming industry as a whole has been increasing its TV ad spend: In November, 13 brands spent an estimated $62.7 million — over $2 million more than October’s spend — and shelled out big for the NFL, college football, and the NBA. PlayStation led the way for the second month in a row, accounting for over half of the industry outlay, followed by Xbox and Nintendo.

GamesBeat has partnered with iSpot.tv, the always-on TV ad measurement and attribution platform, to bring you a monthly report on how gaming brands are spending. The results below are for the top five gaming-industry brands in November, ranked by estimated national TV ad spend.

Although it holds first place again, PlayStation actually reduced its overall spend in November, down to an estimated $34.6 million from October’s $37.6 million. The brand aired 10 spots 3,300 times, racking up 1.4 billion TV ad impressions. “Death Stranding: The Drop” had the most spend, an estimated $9.9 million. PlayStation prioritized budgets to networks including ESPN, Fox, and Adult Swim, and programming such as the NFL, college football, and the NBA.

Xbox takes second place with an estimated spend of $16 million on eight commercials that ran over 1,600 times, resulting in 739.5 million TV ad impressions. The ad with the biggest budget (est. $9.1 million) was “Discover Your Next Favorite Game,” promoting Xbox Game Pass. Topping the list of programming for spend: the NFL, NBA, and college football; networks snagging major spend included ESPN, NBC, and Fox.

With an estimated outlay of $7.3 million, Nintendo takes third place. The brand aired 27 commercials over 3,400 times, generating 561.3 million TV ad impressions. A spot for the Switch, “Special Hotel Getaway: Luigi’s Mansion 3,” had the biggest budget (est. $878,574). Programming with the most spend included SpongeBob SquarePants, The Loud House, and college football; Nick, Adult Swim, and Nick Toons were the three networks with the biggest budgets.

At No. 4: EA Sports, with an estimated spend of $1.5 million on six commercials that ran 200 times, resulting in 125.2 million TV ad impressions. The spot with the biggest spend (est. $715,211) was “Doesn’t Feel Any Different,” a promotion for Madden NFL 20 featuring Patrick Mahomes. ESPN, NFL Network, and NHL were the three networks with the highest spend, while top programming included the NFL, Around the Horn, and NFL PrimeTime.