The gift-giving holidays are nearly upon us, and AMD has a present for all Radeon video card owners. The company is launching its Radeon Software Adrenalin 2020 Edition today. This is the sixth annual update for the graphics suite. As usual, it comes with some new features, but AMD also put a lot of effort into modernizing its user experience.

And it’s the updated UI of Adrenalin 2020 that most people are going to notice first. Well, technically, you may notice the quicker install procedure before anything else. AMD says that it has reworked its installer to run 34% faster than before. But then once you have everything up and running, you’ll find that things look slicker and more organized than ever before.

AMD is also putting a lot of emphasis on getting everyone set up as quickly as possible. To facilitate that, Adrenaline 2020 has three profile presets that give enable or disable certain settings depending on your needs. “Standard” doesn’t turn on anything automatically except for FreeSync. “Gamer” turns on AMD’s suite of visual tools including Enhanced Sync, Radeon Image Sharpening, Virutual Super Resolution, and Radeon Anti-Lag. Then the “Esports” profile turns off anything that will hurt performance, but it leaves on Image Sharpening and Anti-Lag.

You can, of course, adjust everything as needed using Alt+R to bring up the software interface. This also works in games where you can use Adrenalin’s new browser to look up tips and walkthroughs of games without having to alt-tab to a separate window.

Another major improvement to the user experience is AMD’s new Game Center. The company wants Radeon card owners to use this as a universal game launcher. So even if you have games on Steam, Epic, and anywhere else, you can quickly find them and start them from within Adrenalin 2020. But you can also adjust their graphics settings and also track stats.

AMD is not focusing solely on the interface and experience for Adrenalin 2020. It also has a number of new features. Let’s break those down

The highlight feature is Radeon Boost. The idea behind this feature is to increase performance by reducing image resolution only when games are moving especially fast. The idea is that AMD can improve a game’s fluidity and responsiveness by dropping the resolution when players are least likely to notice that decrease in fidelity. The company claims this results in an average performance gain of 23%. 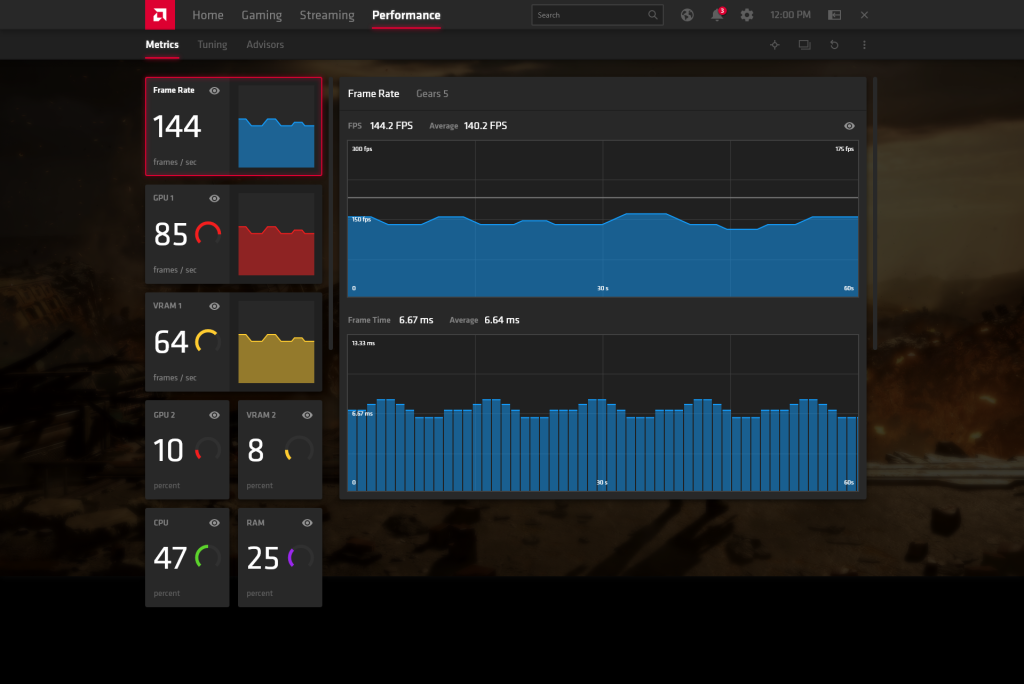 Above: Some of the performance metrics you can find in Adrenalin 2020.

AMD is updating its AMD Link mobile app with a new interface. It is also getting the option to stream your PC games to mobile devices even when you are outside of your home network.

Integer display scaling is one of the most preferred ways to render retro-gaming content on a modern machine. By replicating one pixel into four distinct pixels, classic games end up looking sharp even on massive 4K displays without introducing latency.

A filter for reducing noise and improving sharpness when upscaling photos or videos.

AMD had already introduced Image Sharpening and Anti-Lag in previous software udpates, but now it’s giving you more control over them. Image Sharpening will work with DirectX 11 games. And you can dial in the intensity of the effect. And now Anti-Lag works on DirectX 9 games on pre-Radeon RX 5000 cards.