The remake of Resident Evil 3 is real, and it’s coming for you. Publisher Capcom confirmed the game with a trailer during Sony’s PlayStation State of Play video event today. The clip revealed the updated visuals as well as the release date.

Resident Evil 3 is coming to PC, PlayStation 4, and Xbox One on April 3. Like Resident Evil 2 from earlier this year, Resident Evil 3 is a full remake of the 1999 PlayStation original. It features Jill Valentine and a cast of other characters once again trying to survive in a zombie-infested Raccoon City. Oh, and the game has the unstoppable Nemesis enemy chasing you down the entire game.

Like Resident Evil 2, Capcom is bringing the camera down over the shoulder for the first time in Resident Evil 3. In the original, the camera sat at a fixed perspective. This puts players closer to the action.

All of this should prove enough to get fans excited about the Remake. Resident Evil 2 was a major success for the publisher, and this followup should maintain that momentum.

But while this seems like a sure success, Capcom is doing more to ensure that it appeals to a wide audience.

As part of the game, Capcom is also releasing the 4-on-1 multiplayer Resident Evil Resistance. In this asymmetrical mode, one player takes on the role of the Mastermind, and it’s their job to conduct experiments on survivors. The other four players must find a way to outrun and outgun anything that comes their way.

Finally, Capcom is also launching a $180 Collector’s Edition to appeal to super fans of the series. This comes with an artbook, a Jill Valentine figure, and special packaging. 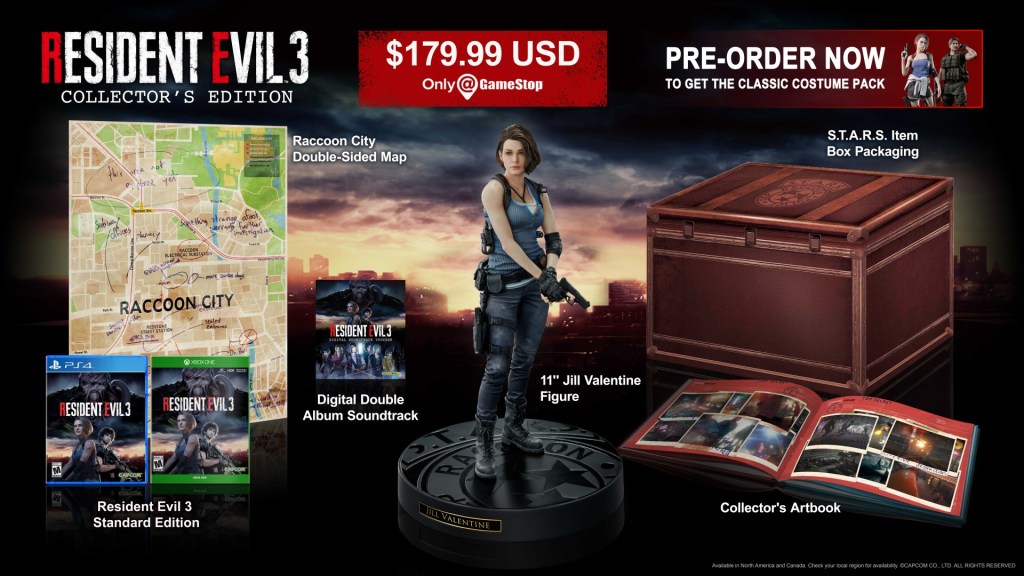 Above: The Resident Evil 3 Collector’s Edition.

So get ready for a spooky April.