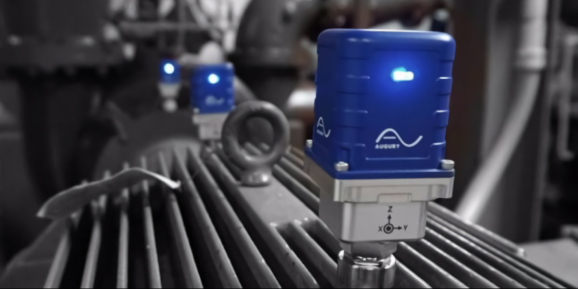 Can mechanical abnormalities in a combustion engine, fan, or pneumatic press be inferred from the sound they produce alone? As it turns out, yes — and with great precision. Patterns embedded within the noise communicate valuable information, some of which foretells trouble.

Inspired by this idea, software developer Gal Shaul and analog signal processing engineer Saar Yoskovitz cofounded Augury in 2011. The two describe the startup, which is based in Israel and New York, as “Shazam for machines.” Its wireless Halo sensors — which attach to commercial refrigerators, industrial-scale heaters, and practically everything in between — record readings like vibration, temperature, and magnetism and upload it to the cloud, where AI algorithms ingest it to make predictions about the machines’ health.

Augury counts Johnson Controls, Brooklyn Navy Yard, NYC Department of Education, Grundfos, PSG Dover, Trane, and Carrier as customers, which no doubt impressed early investors. Case in point: This morning, Qualcomm Ventures announced that it has contributed $8 million in additional funding to Augury’s $25 million series C round, which was led by Insight Venture Partners with support from existing investors Eclipse Ventures, Munich Re/HSB Ventures, Pritzker Group VC, and Lerer Hippeau. The expanded round brings Augury’s total raised to $59 million and comes shortly after the company completed its purchase of Alluvium, a machine learning startup with a platform that surfaces insights from industrial data streams.

“Augury has emerged as a leader in IIoT, leveraging AI to enable the world’s leading manufacturers to improve their operations through better machine health monitoring,” said Qualcomm vice president Carlos Kokron, who will join Augury’s board of directors as an observer. “We are excited by their vision and traction and are looking forward to working with them to advance 5G and edge computing in industrial settings.”

Augury’s technology is engineered such that it’s generalizable and self-improves with scale, Yoskovitz said. The recordings, which technicians capture at different spots in machines, are used to establish baseline readings in Augury’s cloud. They’re then compared to the sounds produced by similar appliances owned by other clients, eliminating the need for Augury to retrain its models for each new machine. The system over time begins to recognize abnormal sounds and other failure indicators — for example, learning to spot a faulty actuator in a lifter robot and applying that knowledge to detect broken actuators in other devices.

Early on, Augury worked directly with service companies and facility managers to diagnose critical systems, like pumps, fans, chillers, and HVAC (heating, ventilation and air conditioning) systems within commercial buildings. But it has since expanded service to noncritical machines, for which it provides continuous monitoring that’s used to diagnose machine health and suggest best maintenance practices.

Augury claims its technology is able to reduce breakdowns by 75%, increase uptime by 45%, and lower asset costs by 30% by spotting the earliest signs of breakage. Technicians have used its smartphone app to save over 3,000 machines to date, monitor more than 60,000 industrial and commercial appliances, and avoid over 7,000 failures.

To be clear, predictive maintenance solutions like Augury’s aren’t new. They’ve been used for decades in jet engines and gas turbines, and competitors like GE Digital’s Predix and startup Petasense offer similar Wi-Fi-enabled, cloud- and AI-driven vibration sensors. Some companies even perform the service in-house, like Gogo, which records in-aircraft servers’ fan speeds — an indicator of their temperature — to build decision trees for Gogo’s server operators on the ground and help predict equipment failures.

Furthermore, it’s a well-established market. According to a recent report by analysts at the McKinsey Global Institute, predictive factory maintenance could be a $1.2 billion to $3.7 billion business by 2025. But CEO Yoskovitz has grand visions for Augury’s technology, which he hopes will one day be built into consumer appliances, like washing machines and electric ovens.

“As digital transformation in the industrial market continues to gain significant traction, it is clear today that 5G technologies will play an essential role in enabling the promise of the Industrial IoT at scale,” said Yoskovitz. “5G’s promise of lower power, increased bandwidth, and low latency capabilities will enable us to re-imagine the way our products work and the value we can provide to our customers and partners. By working with Qualcomm to deploy and utilize 5G-enabled technologies, we will exponentially scale our machine health solutions to make the manufacturing industry more reliable, while helping our partners transform their operations.”