In terms of revenues, the video game industry eclipses all other forms of entertainment. But when it comes to the strength of their fan bases, games aren’t as strong as they could be in a 2019 survey by market analyst firm Interpret.

The reasons for this are complex, according to analyst Jesse Divnich, author of the analysis at Interpret. He said in an email to GamesBeat taht while Super Mario ranked No. 4 across all entertainment brands, the next closest gaming brand was Candy Crush at No. 34, and Resident Evil at No. 38. Keep in mind this is just for survey results for this year.

“The problem is the video game industry is incredibly fragmented across genres and accessibility,” Divnich said. “It’s tough to create a game brand for everyone. When you think about the top games, there is Fortnite, League of Legends, Call of Duty, Minecraft, etc. These are all brands that do not target as broad of an audience as movie or television brands. Some require you to age in, like Call of Duty, while others you eventually age out, like Minecraft. Additionally, accessibility can often hinder broader fanship as most games are not available across all devices.”

By contrast, Divnich said that with movies, brands like Spider-Man, Shrek, and Star Wars are loved and accessible by everyone.

“It makes sense that movie entertainment brands have the edge in holding and growing their fan base over time,” he said.

With games, however, he said there are only a handful of “for everyone, for always” video game brands, with Super Mario being one of them.

“There is just an inherent problem when creating and managing gaming brands over a long period of time,” he said.

Shrek took the No. 2 spot without even having a major release in 2019, reinforcing its relevance in American pop culture and entertainment.

Iron Man came in at No. 3, which puts Disney and Marvel in an interesting position to see how they will continue to support one of America’s top brands with fresh new content.

Super Mario (ranked at No. 4 overall) was the only video game to achieve a spot in the top ten entertainment brands. Half of America’s top 10 brands are based on superheroes.

Miraculous, Apex, PUBG, Counter-Strike, and Roblox round out the bottom of the list. 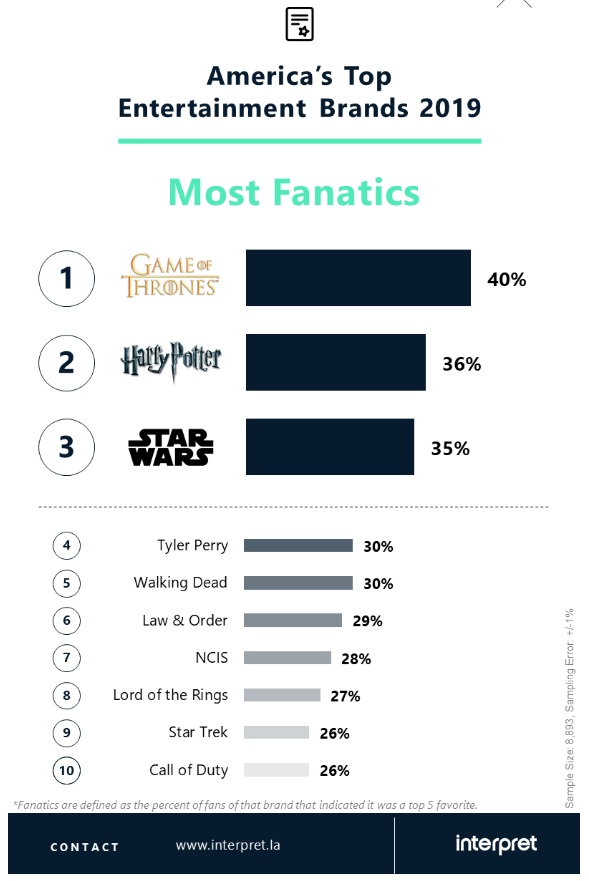 Above: Entertainment properties with the most fanantics.

Fanatics represent the percent of fans of that brand that indicated it was a top 5 favorite. This loyalty score is an indication of the strength of the fanship audience.

It’s long been argued who has the more passionate fanbase. The loyal base of the Game of Thrones brand cannot be stopped as it has the highest percentage of loyal fans among any entertainment brand. Certainly, being a year that saw record viewership for its final season played a factor. Will 2020 be the same?

Harry Potter comes in at No. 2 without any major brand releases in 2019.

The Star Wars vs. Star Trek debate is finally over as Star Wars fans proved victorious with a 9% point difference between the two. Tyler Perry proved to be an incredibly strong brand coming in with the fourth-highest brand loyalty among all entertainment brands. Call of Duty was the only video game brand to make the top 10 list for all of entertainment.

Hulk, Tomb Raider, Madagascar, Teenage Mutant Ninja Turtles, and surprisingly Joker, were among the brands with the lowest amount of loyal fans.

Based on a survey of 8,893 Americans across 92 entertainment brands, Super Mario was ranked No. 1 among video game brands with over 44% of Americans indicating they are fans of the Super Mario brand.

Super Mario did see a release in 2019 on the Switch with Super Mario Maker 2, along with the successful mobile launch of Mario Kart Tour, which has achieved over 100 million downloads.

Rounding out the list is a classic “who’s who” of video games with all the brands ranked in the top 10 being at least 7 years or older, and in most cases over 15 years old.

Some of the lowest-ranking games — Apex Legends, PUBG, Counter-Strike, Roblox, and Gears of War — have not been able to solidify a strong fanship base, despite all being relatively well-known. 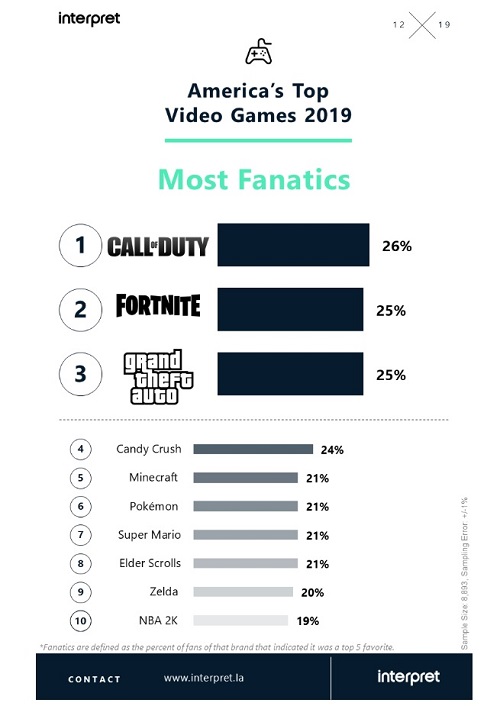 Fanatics represent the percentage of fans of that brand that indicated it was a top 5 favorite. This loyalty score is an indication of the strength of the fanship audience.

Call of Duty, Fortnite, and Grand Theft Auto rank among the brands with the most loyal fanbase. These are three brands that rivals definitely do not want to compete against when new updates or releases are made.

Fortnite is the youngest brand to make the list, clocking in at barely two years old. Candy Crush is the only mobile-focused brand on the list, validating the rising power of the casual game audience.

Brands ranking the lowest, regardless of size, are Tomb Raider, Gran Turismo, Street Fighter, Sonic the Hedgehog, and Gears of War. Tomb Raider and Sonic the Hedgehog ranked among those with a high fanship (29% of Americans), but when asked if either brand was among their top 5 favorites, less than 10% of their fan base said yes. 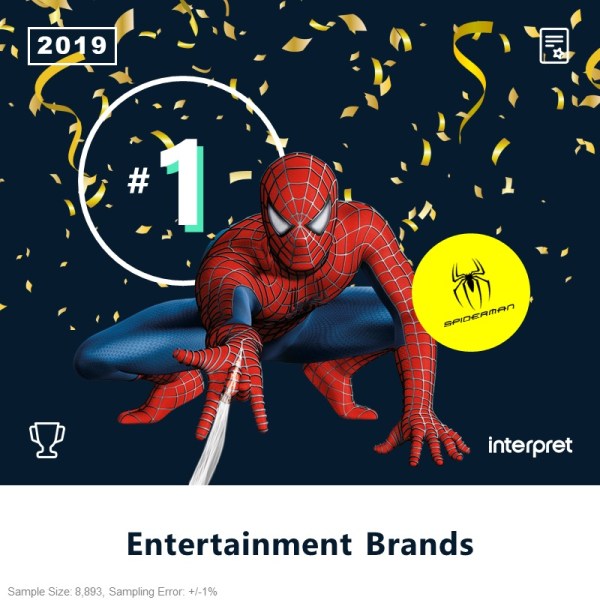 Interpret surveys 9,000 Americans between the ages of 13 to 65 every quarter as part of its New Media Measure program. The survey covers a wide variety of topics including: demographics, behaviors, shopping, entertainment, movies, television, music, and video games. Responses are then weighted to the American population.

This survey was conducted from June through September 2019.

As part of the New Media Measure survey, participants were asked “For each franchise below, please pick the statement that fits best.”

The statements available were:

Participants who selected 4 are fans of that brand.

Participants who selected a brand among their top 5 are considered “fanatics” of that brand.

Fanatics are measured by percent of people that respond to a brand as a top 5 favorite compared to all favorited brands on their list. It is considered a loyalty score and an indication of the strength of the fanship audience. These are fans that will drop everything to engage with their favorite brand.

Interpret said the best efforts were made to determine what it should or should not include as a brand on the list. The company said it was a subjective process, but it used the following rules of thumb.