We saw plenty of blockbuster games — some still in the making — last night at The Game Awards, an event that is often labeled the Oscars of gaming.

And while the game industry now exceeds the revenues of movies and music combined, the comparisons to movies are still apt as a sign of maturity of the nearly 50-year-old medium of video games. One key question is whether it takes more people to create a blockbuster video game than it does to make a movie, and one answer comes from the folks at game publisher Casino Kings.

Casino Kings counted the credits of thousands of video game and movie titles to see how they compare. Back in 1984, Tetris had a list of 24 people on its credits. It should be noted that a lot of people listed in credits may not have worked on a game for very long and that the gaming industry has a long history of inflating credits for people who might have done very little work on a game, and I presume that is true about movies. But the credits in the chart give you an idea of what it takes to make a blockbuster.

Games attract A-list talent to star in its games, such as Norman Reedus in Death Stranding and Keanu Reeves in the soon to be released Cyberpunk 2077. Along with these famous names, a triple-A game now often requires a team of thousands of developers, designers, and programmers all working together over years to make sure it is ready for release day.

Over time, it’s been an arms race. And with the systems that Sony and Microsoft teased last night, the arms race will only get worse. To fully exploit the new systems, you’ll need a bigger team. And it will keep spiraling in that direction. This is why we have huge teams for both big movies and big games. 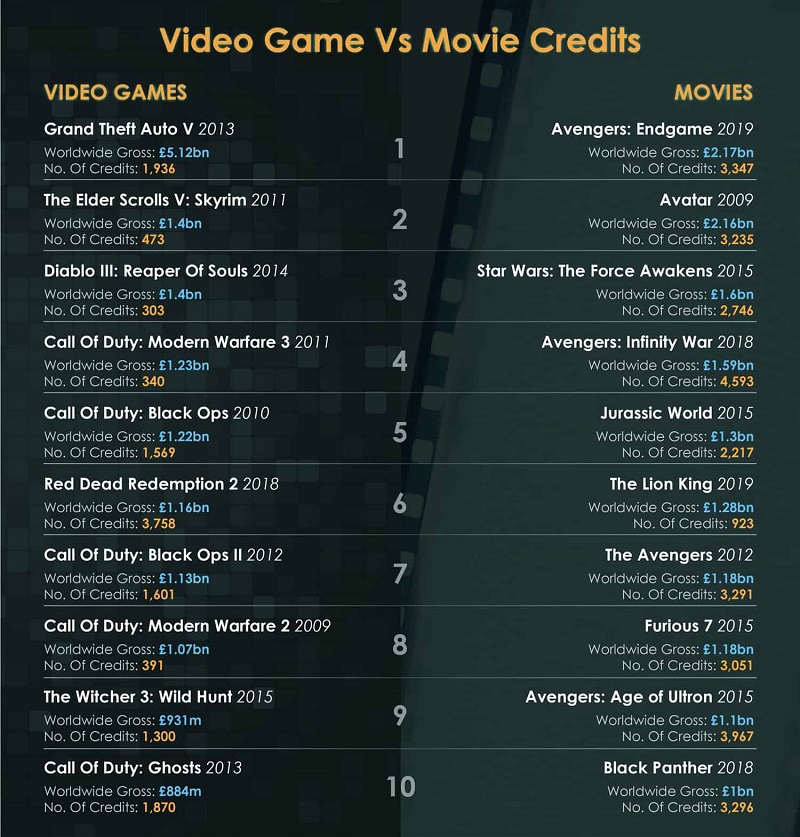 Above: The top grossing games and their credits, with revenue measured in pounds.

The amount of credits (or people) needed to create blockbuster movies still outweighs the number needed for video games, although the gap since the days of the 9-person team who created Pac-Man has narrowed considerably.

Of the top 10 grossing movies of the decade, Avengers: Infinity War had the most credits, with a whopping 4,593 people. But it ranked at No. 4, with $2.09 billion in revenues.

But Rockstar Games’ Red Dead Redemption 2, which came out in 2018, had 3,758 names on its credits — the most of any of the games listed in the top 10 grossing games. But that’s where it takes some analysis of the title to get some more insight.

Many of those credited were voice actors, some who didn’t work on the game for very long. One of the game developers told me that the core of the team was more like 2,000 people. I did my own estimate of how much the game cost to make over seven years, and I came up with $944 million in estimated costs. The game has generated $1.53 billion, according to Casino Kings.

Chris Roberts’ Star Citizen is also a contender for one of the most ambitious games ever made — and it’s still a work in progress. In a rare move, Roberts has disclosed both the amount of funding raised through crowdfunding and venture capital investments, as well as the cost of making the game over the years. From 2012 to 2017, Cloud Imperium Games had spent $193 million, and in 2018, it had 520 people still working on the game, which is a massively multiplayer online game, and its Squadron 42 single-player game. The latter is set to debut in 2020. 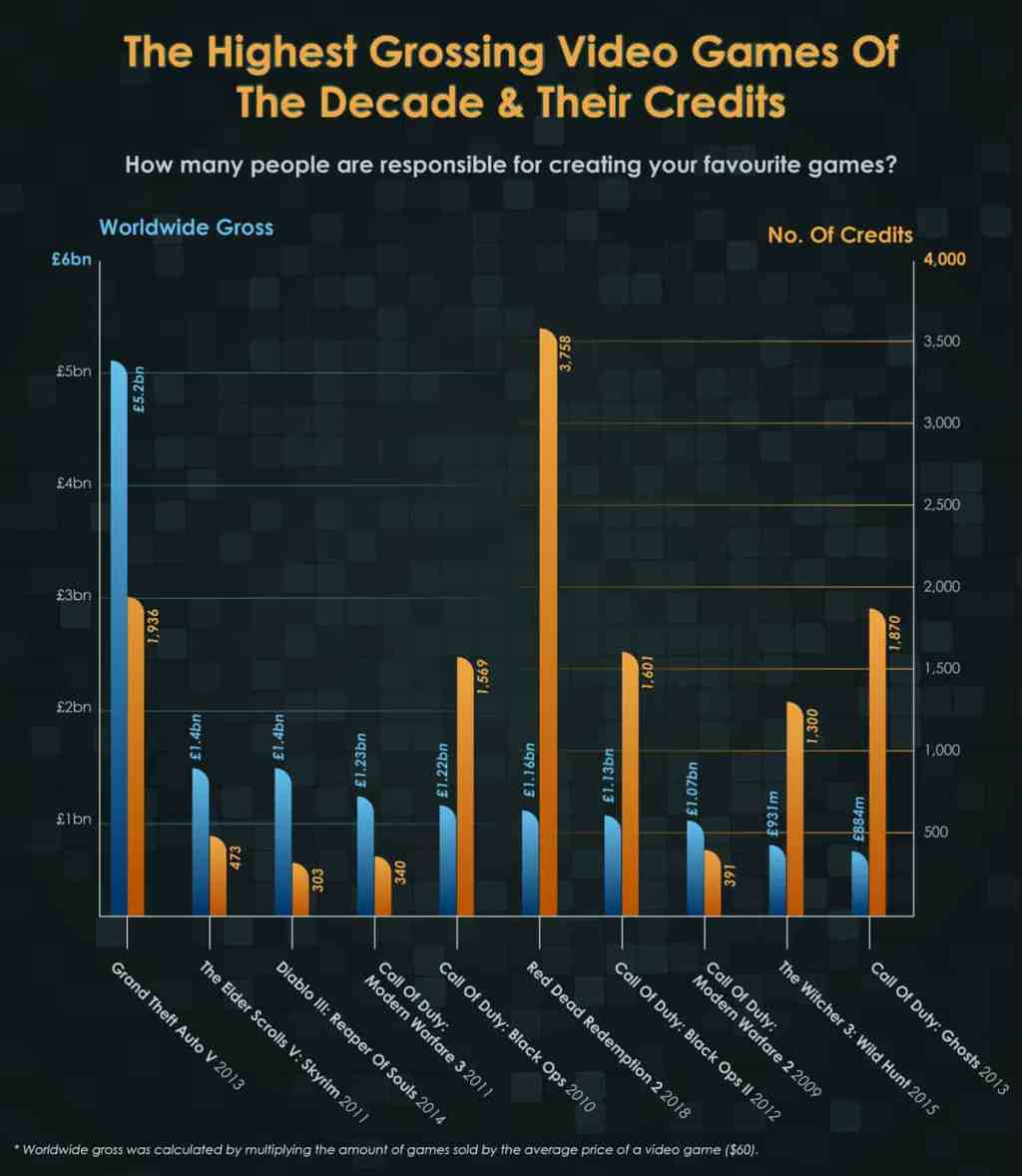 Above: Top-grossing games and their credits.

Video games require fewer people to make than movies. They can also be financially much more profitable, considering many games add microtransactions or in-game advertising to boost revenues for a game.

Game studios are typically extremely guarded about the amount of money that they make from microtransactions, so it’s difficult to source accurate data. Rest assured, games such as Fortnite are generating tons of money via microtransactions.

Taking into account the average amount of time that people play or watch both types of media. Today, with the exception of horror and animated films that last 10 minutes longer, the average films last for around 1 hour and 20 minutes. 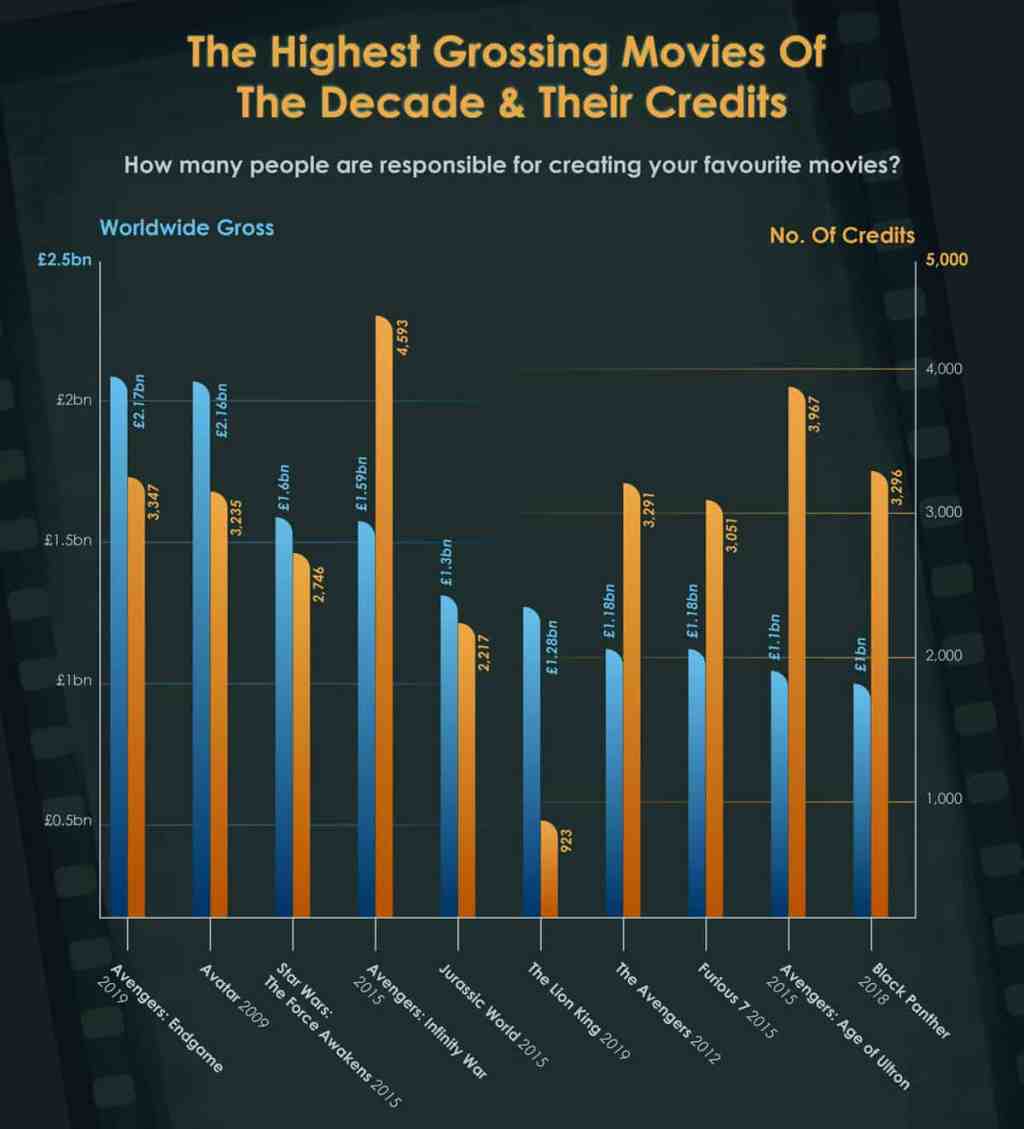 Above: Top-grossing movies and their credits.

Unless it’s a classic, even the most hardened movie fan is unlikely to watch the same movie twice. The engagement level in video games is enormous by comparison, with people playing a single game for 1 hour, 20 minutes on average every day.

One of the most interesting takeaways from the Casino Kings data is that the most expensive games and movies aren’t necessarily the ones that generate the most revenue. As you can see in the chart, some games were quite inexpensive. Blizzard Entertainment made 2014’s Diablo III: Reaper of Souls with 303 people in the credits, with revenue reaching $1.84 billion.

And last year, God of War, built over five years by a team of 300 at Sony, won Game of the Year at The Game Awards, beating out Red Dead Redemption 2, which had a much higher budgets. 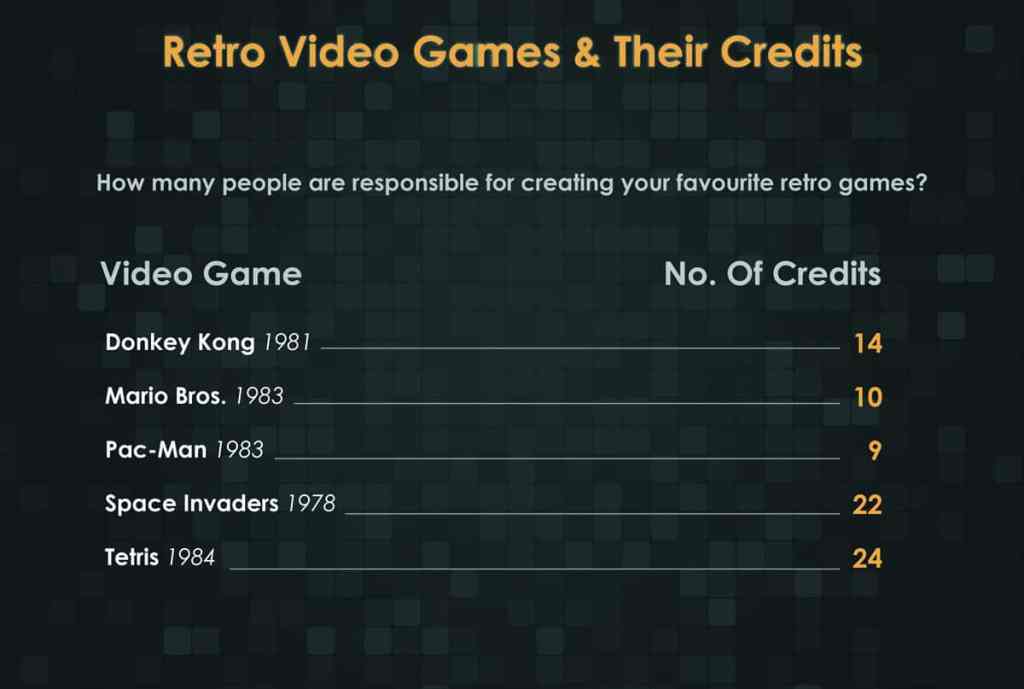 Above: The credits of retro games.

Just as independent movies have a chance to break out as runaway hits, the same goes for games. On the other hand, some games that are based on existing franchises can still be very inexpensive to make, based on the choices of the developers.

It’s good reminder that games like Untitled Goose Game, one of the attention-grabbers at last night’s The Game Awards, can still generate a lot of buzz and revenue without being hugely expensive to make.

And just in case we’ve forgotten game developer Josef Fares‘ immortal words, spoken at The Game Awards in 2017, “I’m so passionate to be here. This is great that you started this. Look, The Oscars should fuck themselves up. This is the shit. This is the real shit.”