N3twork, the maker of the Legendary mobile game and publisher of third-party titles, has secured the rights to develop Funko Pop! Blitz from Universal Games & Digital Platforms, which is winding down its internal development of games.

N3twork will collaborate with Funko and Universal Games & Digital Platforms, the previous publisher, and will prominently feature many of the media company’s catalog of brands and characters. While N3twork recently raised $40 million to expand its mobile game publishing, Universal Games & Digital Platforms announced it would wind down its internal development and license its film and TV properties to external game developers.

Funko Pop! Blitz is a match-3 puzzle game featuring the Funko Pop! versions of fan-favorite characters from across multiple franchises, such as Universal Pictures’ Back to the Future, E.T. the Extra-Terrestrial, Jurassic World and Universal Monsters, along with DreamWorks Animation’s Shrek, Kung Fu Panda and How to Train Your Dragon. It also features Funko’s Fantastik Plastik, Wetmore Forest, and Pop! Pets lines.

N3twork CEO Neil Young said in a statement that Funko’s stylized Pop! characters are a celebration of pop culture, and N3twork will do its best to stir fan passion through its mobile events. Funko Pop! Blitz will use N3twork’s recently announced Scale platform, which uses events, content for fans, and other tactics to get new players and to keep players coming back. 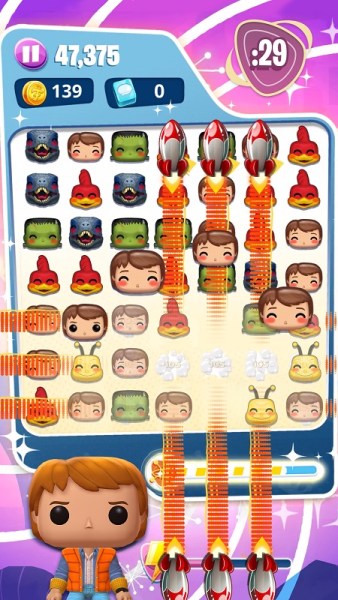 The migration of Funko Pop! Blitz-branded content to N3twork will happen with the hiring of some key talent from Universal Games and Digital Platforms to carry the game and vision forward, and they will be based in N3twork’s Los Angeles Studio.

Jim Molinets, senior vice president of production at Universal Games and Digital Platforms, said in a statement that N3twork’s third-party publishing capabilities are impressive and that Universal remains committed to the game, as a licensor.