But I don’t know if it’s exclusive. You mentioned esports players and whether or not they play one title all day long. Even if I look at the behavior of my kids in my home, they love Fortnite, but they still deviate to playing Clash Royale sometimes on their mobile. That’s where you have different devices, and the proliferation of 4G and cross-platform, which means they can play different games depending on what they’re doing. I do think that people tend to play more than one game at a time, and maybe it’s the people that are really paid to play some of these games, whether they’re streamers or esports fanatics, that tend to really gravitate toward a one-game-only experience. 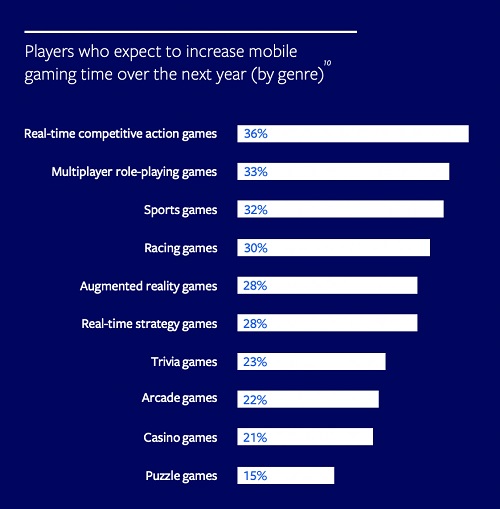 Above: Players are planning on playing more and more mobile games.

An experience that we haven’t seen yet, that we should see, if I’m forecasting what we might see in 2020 — if you have a Call of Duty, for example, why would we not see a hypercasual type of experience with some Call of Duty IP? Or something that widens the funnel and can be used as a marketing experience for that game. I think of that as a playable for a more sophisticated title. We haven’t seen that a ton, but I think it’s a smart way to create new marketing mechanisms, new types of marketing creative. Think about more bite-sized gaming experiences that involve the IP of a more in-depth game.

GamesBeat: It must be one of the reasons that Call of Duty mobile is taking off, with 100 million downloads or more. 170 million now? That’s an interesting opportunity. It also reminds me — when Blizzard announced a new Diablo game, everyone thought it would be Diablo for PC, and it turned out to be a Diablo mobile game. The fans were furious about that. The next year they announced Diablo IV for the PC, but it didn’t turn out so well for the mobile game. Sometimes it seems if you go too far toward casual, that’s a risky move.

Kelley: It was also an experience like — you look at Fallout, as another example. Four years ago at E3 they launched the Fallout mobile game, which led to a more in-depth game on console. I think people enjoy playing IP that they recognize. Coming back to some of the information in the report, marketers need to figure out how they can leverage that and continue investing in that.

One of the other things — it’s not necessarily IP from their game. We’ve seen, this year, an older game, the Game of Thrones game, be relaunched around the final season of the TV series. It was almost a relaunch or reinvigoration of the game because of some of the offline events taking place. Harry Potter was another example. When these entertainment studios reintroduce a new version of the movie or TV show, it’s a great opportunity for games to reinvigorate their audience and find new members. We’ve put a lot of focus internally on, how do we recognize what these events might be and help developers and advertisers wrap themselves around what’s happening in the offline world?

GamesBeat: On diversifying monetization, would you then say that it’s important for companies like Activision or EA, in addition to companies that are already focused on that, mobile-focused companies like Zynga?

Kelley: If you look at Activision Blizzard, they see a huge important in diversifying their revenue streams, which is one of the reasons they bought King. They have sustainable revenue through their mobile business. They’ve perfected how to do the marketing there. They’re seeing new revenue come through the King acquisition in the form of ads, to the point where the Activision and Blizzard sides of the house are looking at how they can create more of an ad inventory or ad experience within the more traditional titles they have.

Also, they’ve made massive investments in things like the Overwatch League and esports in generation, which bring in new revenue streams, but also new ad experiences. I absolutely believe that diversification of revenue streams is important for them. Now, those are still perhaps a little bit different from how mobile game studios are looking to do it. They have the benefit of the offline communities. 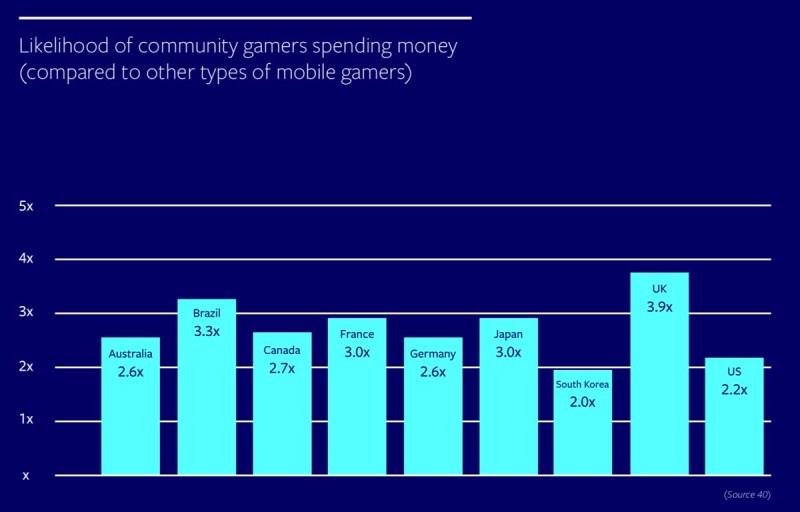 Above: Community gamers are more likely to spend money in mobile games.

GamesBeat: If you look into 5G more, what are some more of the opportunities you expect game companies to exploit with 5G?

Kelley: It’s much more sophisticated graphics, and then the big one is cross-platform. It’ll be platform-agnostic, because everything will live in the cloud. PlayStation and Xbox are banking on streaming gaming services. Google Stadia is obviously based around streaming. It doesn’t necessarily have to be a living room experience. It could be whatever device we’re talking about.

I’m excited to see how — no longer is it going to have to rely on the game engine behind the scenes dictating where the game is played or how it’s distributed. This will be something that, as you start to see enhanced speeds around the world — this will be more content for people that have access to that.

The other thing is, let’s take a look at India. India, for the longest time, they had smartphones. They just didn’t have the speed of internet access that allowed them to have content in a reasonable amount of time. Then you have a mobile phone provider called Jio that was introduced to the market about two years ago, which made 4G accessible to just about everyone at relatively low cost. That’s led to an explosion of content on mobile phones. Gameplay in India has risen, and game developers in India are starting to take hold, because there’s more of an opportunity to reach people. With 5G it just becomes an extension of that, on the back end, as far as the type of games that can be played through a streaming service.

GamesBeat: What kind of expectations for change do you see there? How soon do you think 5G reaches 10 percent of the market or 20 percent or 50 percent?

Kelley: That’s a good question, and I don’t know. You’ll see the developing nations obviously follow the U.S. and Europe. Here in Ireland we have one area of 5G in downtown Dublin. It’s going to be a while. We consider ourselves a first-world nation, but these investments by the carriers — they’ll use this to compete against each other, but I can’t predict how fast it’ll take place. 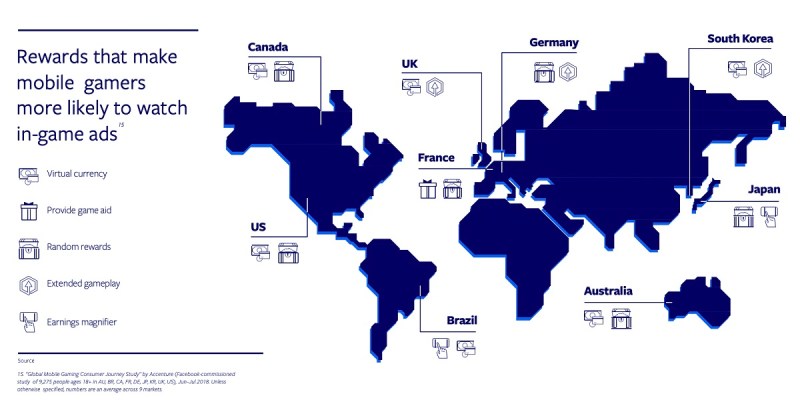 GamesBeat: If you look at these trends, it seems to be pretty well aligned with what Facebook is doing in games. The strategy for Facebook to prepare for these changes, is that more of the same?

Kelley: The point of the report was not to tie it back to our products or how we could use it to sell our services. It’s more about how we can add value to our developers in terms of categorizing the trends we see and making them aware. Our job is to put this in the hands of our partners and people within the gaming community so that they can recognize and use the information to make decisions around how they go to market with their games, or decide to monetize their games.

Certainly we have an added — giving more developers the courage to introduce ads within their games, where still some of them are holding off on doing that — we haven’t talked about the benefits of live ops, and how much more sophisticated around measurement and creating individualistic gameplay — I think that’s something that people hear about, but the term “live ops” means different things to different people. One way we’re looking to add value to the game community is, how can we bring more insights into lifetime value and ways that developers can enhance their lifetime value through resources that we have?

I can’t say that these are all directly tied back to our strategies as an organization. Creators is a big one, and that’s certainly a movement that’s exploding in 2019. We’re looking to bring more creators onto our platform. But there’s not really a monetization hook with advertisers right now around creators. We simply want to match the right creators with the right brands, finding creators that speak to the values that the game studios have themselves.