Chicago-based Stern Pinball, founded by Gary Stern, is launching three different versions of the machine, dubbed Pro, Premium, and Limited Edition models. Prices are to-be-determined, but typically Stern sells the machines for $5,000 to $8,200. People buy the machines out of a sense of nostalgia, longing for the good old days with simpler games and simpler machines, or so Stern has told me.

Stranger Things is a global pop culture phenomenon, as well as a critical success, with 31 Primetime Emmy Award nominations, four Golden Globe Award nominations, and a Screen Actors Guild Award. The machine will be on display at CES 2020 in Las Vegas a couple of weeks.

Stern said that the game was designed to let you feel the “terrifying forces in Hawkins, Indiana that turn this small town ‘upside down’ with supernatural elements, strange sightings, and government secrets.”

Stranger Things pinball machines have been designed to give players the feeling that they are unraveling the extraordinary mysteries and secret government experiments taking place at the Hawkins National Laboratory. The gameplay focuses on unlocking the hidden meanings of supernatural events occurring in and around the town, including the appearance of a young girl known as “Eleven” with amazing telekinetic abilities. 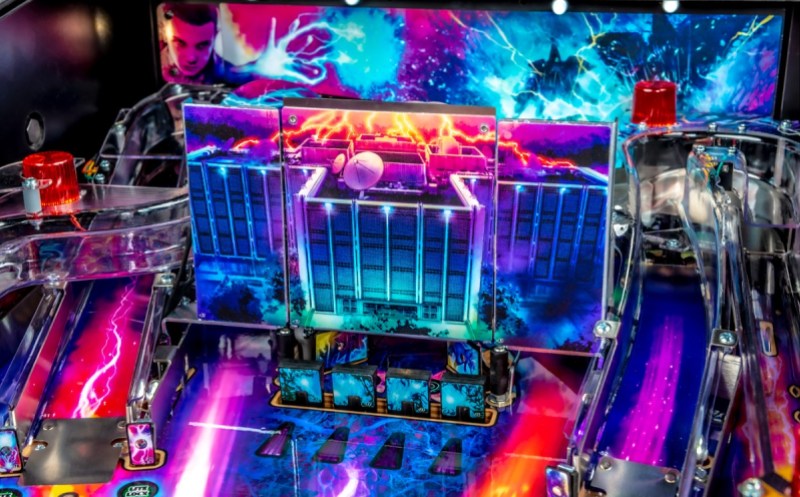 The Premium and Limited Edition models feature a first-ever video projector that displays images and animations directly on the playfield, creating dramatic interactions with gameplay action. The center of the playfield features a unique ramp that doubles as a screen and leads the player into a direct battle with the Demogorgon. These models also feature a new Eleven themed “telekinetic” magnetic ball lock.

The Pro, Premium, and Limited Edition models all feature distinct hand-drawn art in addition to the custom sculpted, interactive Demogorgon bash toy, guarded by drop targets and a rotating ramp. All models include two hideout ball scoops, a Demodog spinner, three custom ramps, and game rules that will transport players into the Upside Down.

Pinball has been Stern’s life. His father owned Williams, the pioneering pinball company. And Stern started Stern Pinball in 1986. He sold his firm to Sega in 1994 and then bought it back in 1999. The circuit helps draw attention to the business, and it rewards the most fanatical players. Almost half the machines are exported overseas.

In past years, Stern Pinball has gone with the flow, making machines based on hot properties like Guardians of the Galaxy or Star Wars. I make it a point to talk to Stern at the annual CES show because, after all these years, he’s still a big kid.

Asked why it went with Stranger Things, Stern said in an email, “We typically look to partner with licenses that are globally recognized because we distribute around the globe. Stranger Things was a perfect fit for pinball and our internal team really wanted to develop a game based on this license.”

Overall, Stern Pinball and its suppliers and distributors employ more than 4,000 people.