I’m a sucker for alternate history — the wilder, the better. I’m deep into the works of Harry Turtledove (his moniker is “the master of alternative history), and I dig the fantastic spin on a parallel Earth from Taylor Anderson’s Destroyermen series. So when I got a pitch for a tactical World War II game set in a different time, a different place, I wanted to learn more.

Broken Lines takes place in the Eastern European theater of WWII. It follows a squad of soldiers who crash behind the lines. They’re without leaders or orders, and while they bicker about their predicament, a mysterious fog creeps over them. And nothing is quite the same as it was before.

I sent some questions to PortaPlay creative director Hans von Knut Skovfoged to learn a little more about Broken Lines, which Super.com is publishing for the PC and Switch this year. This Denmark-based studio has worked on games, education apps, AR, and other interactive entertainment since 2006. Its Panzer Geekz got more than 500,000 downloads on Windows Phone, and its previous PC release was an XCOM-like tactical game, Tales from the Void. It shows PortaPlay is gaining confidence as a development studio, trying to create more of its own games and going beyond the “work for hire” model.

PortaPlay considers Broken Lines a “war noir” in some respects, focusing on the mental states of the soldiers as they navigate this familiar-but-different place, facing threats they’re not prepared to handle. It’s an intriguing setup, and I’m eager to give it a look-see later this year.

GamesBeat: By alternate history, is Broken Lines an exploration of “Germany won the World War II” or “What if that taxi killed Winston Churchill,” or is it an exploration of a world with aliens, out-of-time tech, or monsters?

Hans von Knut Skovfoged: The game is grounded in history and reality, but with added fictional elements. So there are no space-Germans, alien tentacles, or magical artifacts. But we do take some liberties in other ways.

The game starts with a transport plane carrying a mixed group of veterans, reserves, field medics, and engineers who crash-land and find themselves in a fictional land somewhere in Eastern Europe. This land features a made-up language and opponents which might be neutral or might be hostile — you are not 100% sure.

Without spoiling the story, we can say that there is both a plausible story and a mystery hiding in the fog — and you as the player can choose which to believe. But we are pretty sure that fans of both classic WWII storylines and alternative-history fans will find something they like. 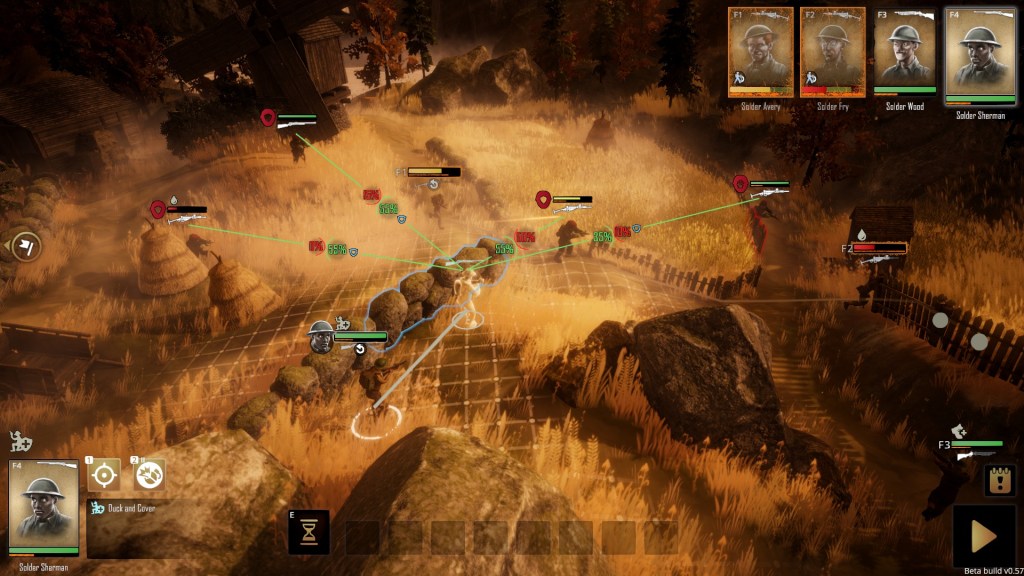 Above: Broken Lines may have an interesting setting, but it also wants to have interesting tactical combat, too.

Von Knut Skovfoged: First and foremost, we wanted to do a story about characters under pressure: not about the actual war, but about what can happen to people during a war, depicting the war from the perspective of the soldiers.

So we wanted players to stay close to each of their men and women in the story. We wanted you to get to know and manage each of them — and really feel the loss when they die.

A tactical game with a small group of soldiers allows us to do exactly that. It lets you be closer to the action and the characters, but still see it from different perspectives — which would be harder to achieve in a more distanced strategy game or a more narrowly focused [first-person shooter].

Initially, we experimented with different historical locations and events, but it was hard to avoid “falsifying history.” When we worked on creating interplay in the group and setting up interesting player choices throughout the campaign, that affected the story.

And so, we made a decision — we designed the game to be very realistic in regards to the era, people and behavior, weapons, abilities, combat simulation, etc., but we wrapped it in a location, setup, and story that was total fiction.

GamesBeat: As a tactical RPG, will it be more like Darkest Dungeon or older games, where units fight on a map?

Von Knut Skovfoged: The gameplay is more in the vein of “new titles inspired by older titles” and “true old titles” such as XCOM, Frozen Synapse, Hard West, and Commandos. So, there are a lot of 3D maps handcrafted with interesting tactical situations in mind — and a lot of fighting, of course.

This is combined with storytelling and dialogue events, inspired by games such as Banner Saga, and mood and atmosphere inspired by Apocalypse Now and Darkest Dungeon.

GamesBeat: How is this an evolution of what you explored in Tales of the Void?

Von Knut Skovfoged: Tales from the Void originated from several ideas that looked cool on paper — you controlled a squad moving around in real time on asteroids with low gravity, where movement, animations, and combat were “physics simulated,” while planning your actions in real time or during “tactical pause.” You can pause at all times, like in Dragon Age.

In practice, it didn’t work as we wanted it. The tactical combat was a bit too “loose,” partly from the use of physics and the resulting randomness and chaos. And most players also forgot to use the pause function, which made the experience way too frantic, stressful, and unforgiving! So we learned the truth in the saying “kill your darlings” when designing Broken Lines.

With this experience in mind, we created Broken Lines with the ambition of making a really entertaining combination of realistic tactical combat simulation coupled with a character- and story-driven campaign. We kept prototyping and testing for almost 1.5 years, with external testers coming in every week to play the game and give us feedback until we finally were satisfied enough with the core combat-gameplay.

And then we knew we were ready to create the actual game — the 3D graphics, levels, storytelling, and campaign.