TradeOff Technologies has launched TradeOff, a fantasy stock market trading game aimed at teaching financial literacy to everyone in a fun and gamified way. It might be a good way to start off your New Year’s resolutions.

Denver-based TradeOff blends the action of Wall Street with the intensity of gaming, allowing players to win real money and prizes from stock trading competitions in a low-risk way, the company said.

It’s not an easy thing to engage millennials, a distracted generation that tends to distrust legacy financial institutions and is the first generation of Americans to believe they won’t be better off financially than their parents are. The strategy game is available on iOS, Android, and the desktop via tradeoff.com. The game modifies the real-life experience of stock trading, compressing time to make it more exciting and taking the risk out of gambling with a huge amount of real money on the stock market.

“TradeOff is a great way to make all things financial accessible to a millennial generation in a way that demystifies trading,” said Rob Kuck, CEO of TradeOff Technologies. “When you look at that generation, they are the largest generation in the U.S. at 25%, and they own only 3% of the wealth. They have some of the greatest debt ratios of any generation because of the student loan debacle.”

But millennials also haven’t invested much of the wealth that they have. Millennials are statistically the least-invested generation in history; a fact that, if not remedied, is going to be painful in the future for an entire generation that will lose the impact of compounding growth and have their savings destroyed by inflation. (We should put them on the endangered species list.)

TradeOff looks to remedy this, allowing players to play for free so they can learn and practice real-world skills, and once they are ready, they can join paid events to pit their skills against other players for large cash payouts and other valuable prizes.

“We thought, let’s create a game that’s engaging on social, is fun to play, and that generation can earn prizes and even cash while they are learning finance,” Kuck said. “We lower the fear factor. If we get a gamer engaged and playing, that’s the first step that builds confidence and builds wanting to learn more.” 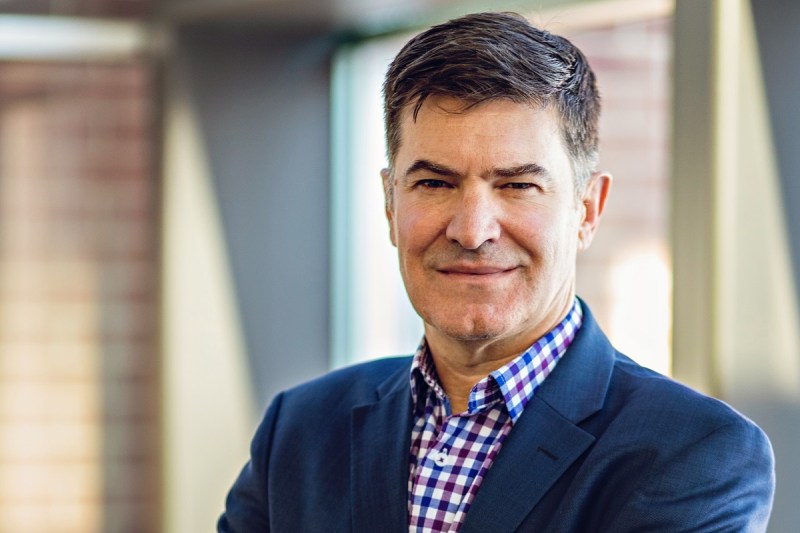 Above: Rob Kuck is CEO of TradeOff.

Kuck and his cofounder Mark Helweg started the company in 2016 with the premise to test whether millennials would enjoy a trading game. They raised $3.5 million to build the product and get relationships in place with banks.

“We saw the daily fantasy sports come to maturity, and we thought that the audience was pretty similar to the trading audience,” Kuck said. “It’s an audience that engages with things they love. They want more fast rewards than betting on a season of football. We addressed that audience and along the way pivoted a bit. A bigger and more engaged audience is the video game audience, where the average age of U.S. gamers is 35. They are reaching an age of financial accountability. We found that there are very few ways to engage those folks in teaching them specifically about trading.”

They decided to use data for the game is based on real stock price history, sped up and gamified to help players learn to read price charts like the pros on Wall Street without risking their life savings.

“I didn’t come from a gaming background. When I shared this with the gaming pros that I know, their comment was ‘Holy cow, this is logical.’ I was so much of a neophyte that I didn’t know what that meant,” Kuck said.

Other simulations existed, but they used synthesized data, which didn’t feel like a real experience for trading, Kuck said. To avoid problems with the Securities and Exchange Commission, they decided to use historical info rather than current information.

They built the game on a small budget. The founders chose a chart-trading game as the first product because trading tends to be more active than investing. You can think of this as the difference between an investing competition that runs for a year, and a trading competition that runs for a day — but in the case of TradeOff, it’s about five minutes.

“We want people to practice before they risk real money,” Kuck said.

How the gameplay works 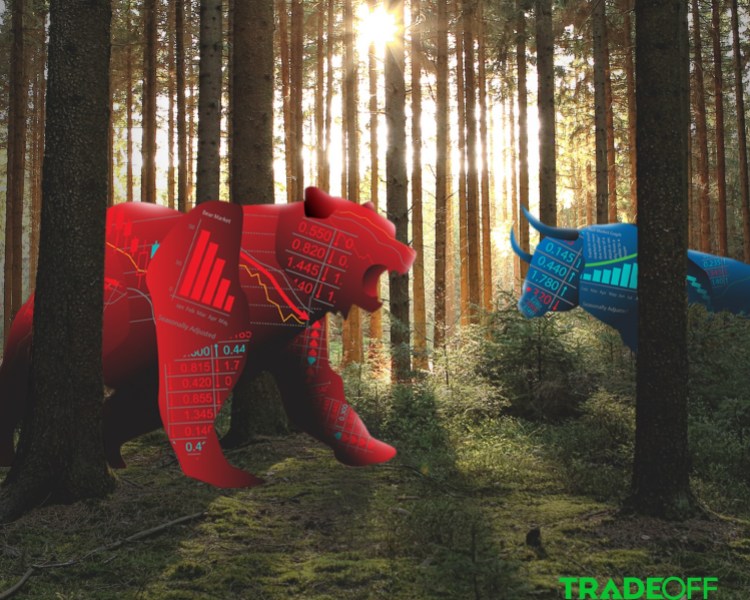 Above: TradeOff pits bulls and bears against each other.

If you are 18 or older, you can play to win prizes and money in 41 states where it’s legal to play games of skill for money. You start off with $100,000 in virtual money, and then you get around 5 minutes or less to turn that into the biggest pile of money you can. You can buy shares of stocks or sell them short (betting the price will fall) in order to make money.

You can’t buy virtual trading account funds. Beginning later this week players will be able to win tokens, or purchase tokens with real money to enter prize events. This feature opens TradeOff to a much wider market offshore for cash prize competitions where entering with fiat currency may not be allowed.

Rather than wait for an entire day or week of stock trading, TradeOff uses historical stock prices and compresses them into a couple of minutes for one game of trading. Since it is based on historical prices, you can play at any time of the day, and you don’t have to wait for markets to open. You can compete against others or play it solo.

And it’s not a dull and solitary experience like in real life, as the game engages you via virtual currency, achievements, rewards, and social interactions. The company has solved the merchant service and regulatory challenges in the U.S. and Canada, where you can play it now. It is working on making it legal offshore. It’s a bit like HQ Trivia, where a lot of people come together to compete at the same time, but in a legal skill game with unlimited entries in a bid for cash or prizes.

“This gives people an outlet, as trading is a lonely profession in a home office or they’re in a cubicle at work,” Kuck said. “This is a way to socialize the experience. These are short, fast events.”

TradeOff connected with gaming personalities to market the game. Craig “Mini Ladd” Thompson, Will “BigTymer” Johnson and Tyler “Wildcat” Wine have said they are fans of the game. In addition, they have also invested their own money and time into the experience, and they have also agreed to promote it. That’s no small partnership, as the trio have more than 14 million followers.

The company also said it has a strategic partner in the brokerage business. 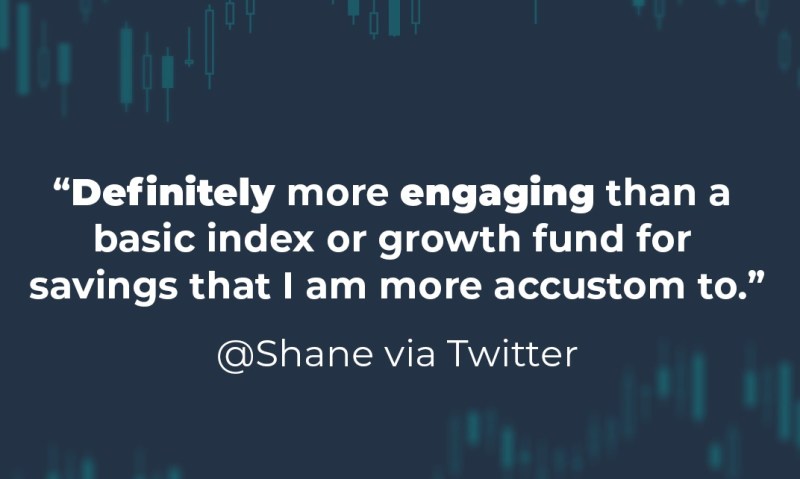 Above: What TradeOff aims to teach.

The company has 15 employees, dispersed in various locations.

It teaches players who know nothing about trading stocks (and other markets) that price charts are widely used to make profitable buy and sell decisions, and it overcomes misconceptions about markets being random or difficult to understand.

TradeOff’s web site includes educational content. The company publishes a newsletter that’s really focused on the gaming world to show how players can actually invest in gaming companies that they know and they follow.

In 2018, the company did a beta test with 7,000 people who were familiar with trading. Then it did another test with the influencers, and within a week, they added 32,000 new players who were gamers and YouTube fans. Now the company is launching in a much bigger way on mobile devices. The average age is about 28. The players are financially interested, but not necessarily aware.

“It teaches them the skills and terminology of finance,” Kuck said. “We’ve been surprised and encouraged that there is enough interest in the game itself. If we create the incentives and rewards, we think it is a really powerful story to tell.”