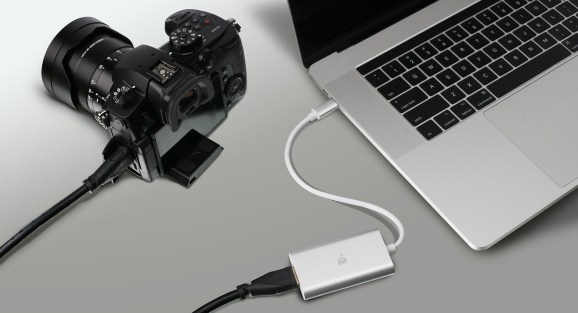 Content creators have a new option when it comes to affordable capture equipment. Tech manufacturer IOGear revealed during the Consumer Electronics Show in Las Vegas today that it is rolling out a lineup of production gear called UpStream. It’s starting with the $100 UpStream Video Capture Adapter, which turns an HDMI-out-capable camera into a high-quality webcam. But IOGear has plans for a number of other products as well.

The video adapter is just the start for IOGear. The company also has three more announced devices. First is the UpStream Game Capture Adapter. This is another USB-C adapter but built specifically for connecting consoles or a second PC over HDMI. It outputs video at 1080p and 60 frames per second for your capture software, but it can passthrough a 4K60 signal to a monitor.

IOGear doesn’t have a price for the game adapter yet, but it is launching in Q2 of this year.

“Live streaming on popular content networks has opened up a world of possibilities for masters of their crafts to share their passion and interact with a global fan base in real-time,” IOGear product management boss Joseph Zhang said in a statement. “Our UpStream product line makes it simple and cost effective for anybody, tech savvy or not, to create and stream television-quality video live over any of today’s popular social media video platforms.”

The subtext to Zhang’s statement is that a lot of people are trying to get rich making content, and IOGear sees an opportunity to make money selling them tools. This puts it head-to-head with Elgato, AVerMedia, and more.

The video and game adapters from IOGear are the basic and simple tools for most people. But the UpStream product line also includes much more powerful options.

The UpStream 4K Game Capture Hub is for creators who want to have more control over their video. It has an HDMI input for a video source and camera source. And it enables you to switch between those two on the fly using a mobile app. You can also do picture-in-picture as well as live audio mixing using multiple interfaces including an XLR mic input.

Finally, IOGear has the UpStream Pro Video Production Switch, which — as the name suggests — is its “prosumer” tool. Here’s how the company describes it:

“The UpStream Pro Video Production Switch is an all-in-one multi-channel mixer that combines multiple HDMI inputs that support 4K video input and two 1080p camera sources, an RCA audio input, and dedicated microphone input for pro-quality live streaming to a global audience via any content delivery network. Featuring a compact mixer control panel with programmable buttons and UpStream Studio, an intuitive iPad app, users can easily edit their layout, switch between scenes, add image or text overlays, and adjust PIP settings in a simplified tap and swipe UI – all without the use of a computer.”

This is IOGear’s attempt to but a professional studio in a consumer-friendly box. And content creators will get the chance to use it soon. While IOGear hasn’t announced prices for either of the higher-end devices yet, the UpStream Pro Video Production Switch is launching before the end of March. The 4K Game Capture Hub, meanwhile, is coming in Q2.