Netgear, the big maker of routers and switches, is always in a rush to make products that capitalize on technology transitions, and that’s true for the products it’s rolling out at CES 2020, the big tech trade show in Las Vegas this week.

The mesh networking technology blended with Wi-Fi 6 is aimed at bringing “death to dead zones” in your home when it comes to accessing the internet via laptops, desktops, or smartphones. These products recognize that multiple family members and visitors will want to access the internet for downloading content — and for creating and uploading it too.

People are devouring bandwidth with services ranging from cloud gaming to Netflix. If you’re looking for alternatives to traditional networking or embrace 5G on the run and in your home, then Netgear is coming up with a variety of products for you.

“Our aim at Netgear is to take on the key technology transitions for consumer benefit and quickly bring more products to the market that simplify the adoption of these technologies,” said Abhay Bhorkar, Netgear director of product management of connected home products, said in an interview with VentureBeat.

Netgear is unveiling the following products. 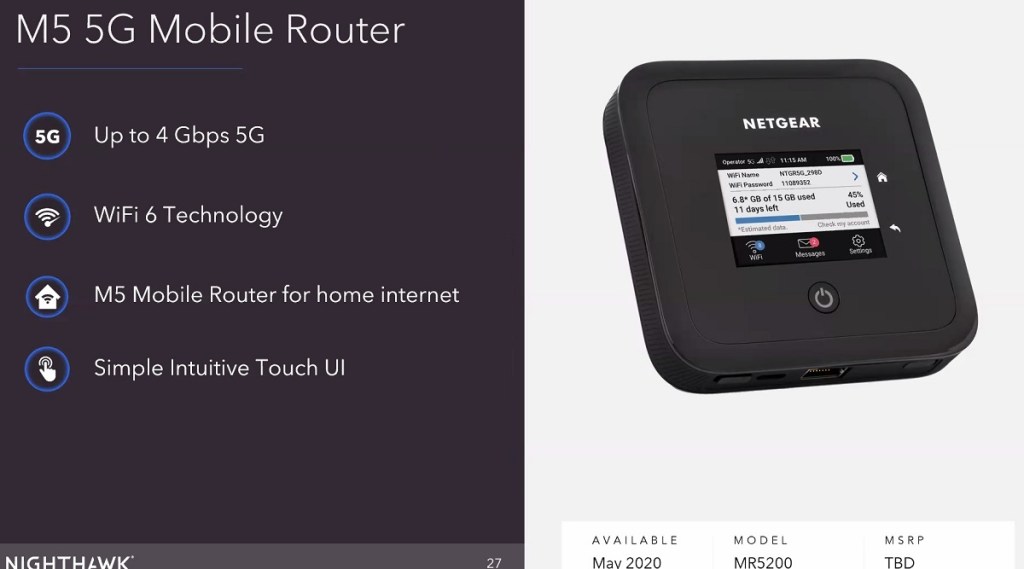 Above: Will this be how 5G gets into your home?

This Nighthawk M5 5G WiFi 6 Mobile Router will get you on the 5G bandwagon. 5G promises faster internet speeds with low latency over both Wi-Fi 6 and 5G networks.

“This has more features, use cases, and a better price point,” he said. “The last transition here was about 12 years ago with 4G. [5G] will lead to new use cases. We are excited about the higher throughputs of up to four gigabits per second and decreased latency. It opens the doors to things that are time critical, like mobile gaming or low-latency gaming in general.”

Fazal added, “This is all really due to the spectral efficiency and the traffic capacity that the networks are going to gain by doing 5G. We expect carriers to roll out higher data plan limits, and in some cases even unlimited data plans. And once that happens, now these companies are taking to become a real alternative to traditional fixed-line cable companies.”

The Nighthawk M5 Mobile Router is designed to deliver a mobile lifestyle at its fullest potential or to be used as an alternative or backup option for home internet with the gigabit Ethernet port.

By connecting the M5 Mobile Router to an existing home router through the 1Gbps Ethernet port, the Nighthawk M5 brings 5G speeds into a home network and can also be set up as a fail-over option for uninterrupted internet. The router includes a long-lasting lithium-ion battery, which you can remove if you’re using the router in a stationary location such as a home or office.

The Nighthawk M5 mobile router with 5G connectivity and Wi-Fi 6 will be available in retail channels in the second half of 2020, with pricing announced at time of availability.

“This lets you connect to the 5G network and give you internet wherever you are,” Fazal said. “This gets consumers high bandwidth wherever they want it. 5G in the home will become a real alternative for everyone to choose over fixed-line service.”

And Fazal added, “Already we’re starting to see a significant ramp up in the landscape. The four major operators in the nation are all on board with 5G. T-Mobile just made an announcement a couple of weeks ago, saying they lit up 5G in almost 5,000 cities now. They are using their 600 megahertz network and putting 5G on it. They can do it at a lower cost than Verizon or Sprint, but the speeds are going to be similar to the 4G network.

“You get 5G coming in and then you distribute it with Wi-Fi 6 on the other side. It becomes a great product for in-home internet. You can run this without a battery. You can plug it into the wall and use it as a 5G modem for your home internet.” 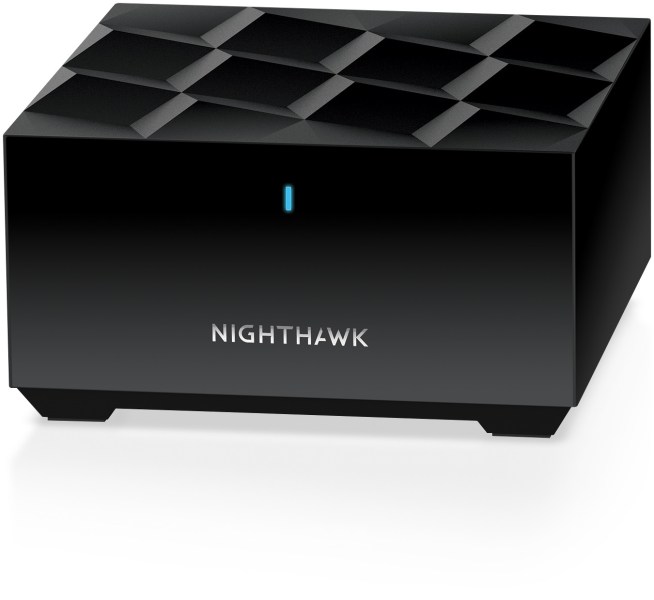 This router is aimed at bringing Wi-Fi 6 into the home to take advantage of how the new protocol, 802.11ax, can triple or quadruple the speed of wireless home networks based on the older 802.11ac protocol.

The mesh technology helps extend the range of Wi-Fi 6 to as much as 3,000 square feet, covering medium-size and large homes with internet speeds over 100 megabits per second (Mbps) per user. It comes with both high-powered router and satellite networking device options to broaden the range of your Wi-Fi even more as consumers try to wipe out Wi-Fi dead zones in their homes.

The Wi-Fi speeds can reach up to 1.8 gigabits per second, fully combined. You can set up the network in minutes using a Nighthawk app, and it is backward compatible. The system has a 1.5 GHz quad-core processor, and it should enable applications that combine 4K UHD video streaming, AR/VR gaming, and more. The MK62 version will be available for $230 in January, while an MK63 version will come in March, price to be determined.

“Mesh combination and Wi-Fi 6 are important now, making up half the market,” Bhorkar said. “In 2019, we saw Wi-Fi 6 came up pretty fast, and it is now a key technology for customers to be able to handle more devices with more capacity and even better speeds in the home. In 2020, it’s about integrations of advanced technology for early adopters in the home.” 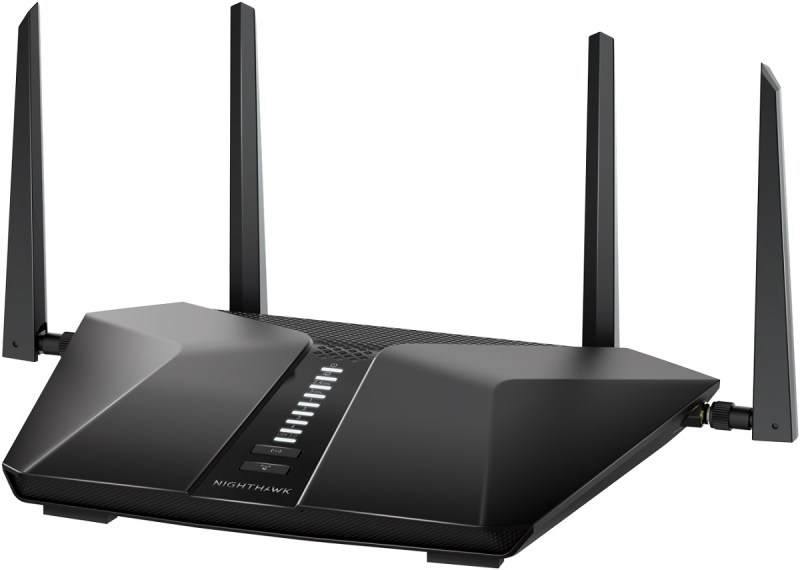 This Wi-Fi router also exploits Wi-Fi 6 technology to provide combined speeds up to 5.4 Gbps so you can connect, stream, and download faster to PCs and mobile devices.

It has a 1.5 GHz triple-core processor for real-time applications such as multimedia streaming, online gaming, and audio/video chats. It can also deliver four times the data capacity per user. You can use it in medium and large homes, and connect up to 25 devices to it. It will ship in March 2020, and the price isn’t disclosed yet.

This device extends your Wi-Fi 6 network with four streams to get better coverage of your home. It has two internal antennae that can deliver Wi-Fi speeds up to a combined 1.8 Gbps. It comes out in February for $150. You can use this as an access point to create a fast lane for your Wi-Fi 6 devices. 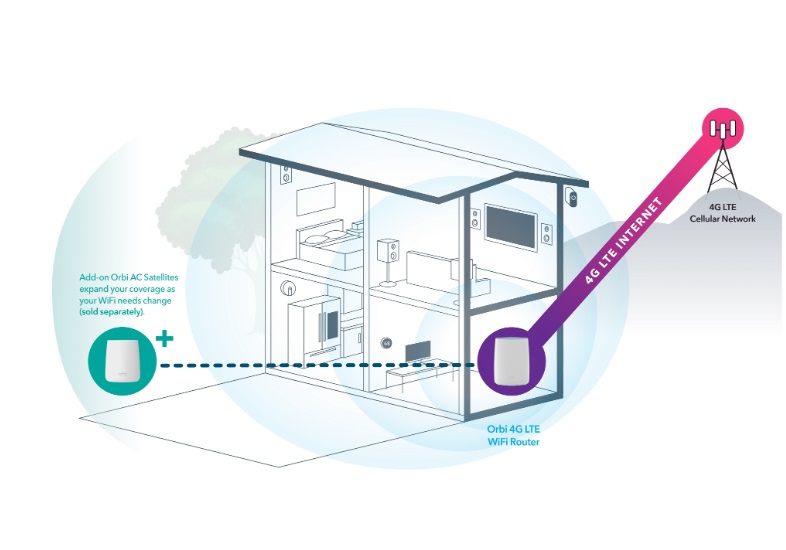 Above: Netgear’s Orbi brings 4G as an alternative in your home.

Netgear is combining the benefits of its Orbi Tri-band Mesh WiFi system with 4G LTE cellular connections to provide you an alternative to the traditional cable or fiber internet options.

The Orbi 4G LTE WiFi Router is perfect for those areas that have limited or no access to traditional wired broadband. Orbi 4G LTE can also be combined with your existing wired service to create an internet connection that is backed up by 4G LTE in case of a wireline service disruption.

The design with its high-gain internal antennas will reach up to 2,000 square feet of Wi-Fi coverage and can be easily extended by pairing with any Orbi WiFi 5 (802.11ac) satellite to create a mesh Wi-Fi system. The dedicated Wi-Fi connection between the 4G LTE Wi-Fi router supports seamless 4K streaming and gaming everywhere in a home.

The Orbi app makes it easy to get started with better Wi-Fi everywhere no matter where your home is located, and the app also enables management of the Orbi network. 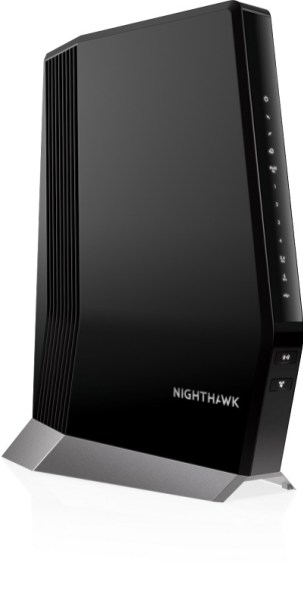 For those of you who don’t want to get their cable boxes from a cable TV company like Xfinity, Netgear provides an alternative cable modem, dubbed the Netgear Nighthawk AX8 Cable Modem Router.

Ravindra Bhilave, director of product management for connected home products at Netgear, said in an interview, “This combines DOCSIS 3.1 with Wi-Fi 6. You need a high-bandwidth pipe coming into the home and you can get that with DOCSIS 3.1 over the cable service. You can get gigabit service now, and it can eventually get to over 10 gigabits a second.”

This first-of-its-kind retail box blends a DOCSIS (Cable Labs compliant) 3.1 cable modem router with Wi-Fi 6 networking. This way, you don’t have to connect another box to your cable box in order to get Wi-Fi set up.

The cable modem can deliver multi-gigabit internet access and wireless networking that is four times the previous generation. It’s targeted at gamers who want lag-free gaming and 4K HD streaming at the same time across multiple screens.

The Nighthawk AX8 enables consumers to stream, game, and browse more than ever with 2.5Gbps Multi-Gig Ethernet ports and 4 Gigabit Ethernet ports for wired connectivity support with lots of options for a high-speed internet connection. You can set it up with the Nighthawk mobile app. It has an automatic firmware update feature that makes security updates easier, with no need to involve your service provider.

It will be available this month for $430. That’s a lot, but if you rent a box from the service providers, you may pay more than $150 a year and still not get access to the best technology, Bhilave said.

“Retail can be a lot more compelling,” he said.

This eight-stream gateway can handle eight Wi-Fi streams at a time, and it has 2.5 Gbps multi-gig Ethernet ports. It will debut for $430 in March or April. You can install it with the Nighthawk app, and it has auto firmware updates. It works with all major cable companies (Xfinity, Cox, and Spectrum) and at all speed tiers.