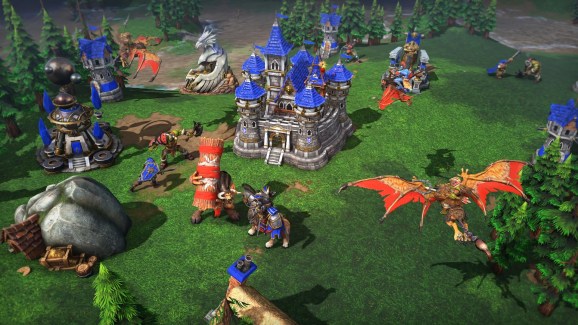 A town in Warcraft III: Reforged.

ESL and DreamHack announced today that they are teaming up with Blizzard Entertainment for new esports events.

StarCraft II and the upcoming Warcraft III: Reforged will each get their own ESL Pro Tours. Like the ESL Pro Tour for Counter-Strike: Global Offensive, this will be a series of tournaments help throughout the world during the year. ESL and DreamHack have agreed to a three-year deal with Blizzard. Blizzard is providing a combined prize pool totaling $4.6 million for the first season of the Pro Tours. The Swedish company Modern Times Group owns both ESL and DreamHack.

StarCraft II is an aging game that doesn’t have the audience it once does. With new games like Diablo IV and Overwatch 2 on the horizon, it makes sense for Blizzard to give StarCraft II’s space at its yearly convention to something else. Even despite its age, StarCraft II still has plenty of players in places like the U.S., China, and South Korea.

Warcraft III: Reforged, however, is not even out yet. The remake of the classic RTS comes out on January 28. Although Blizzard runs its own high-profile esports for games like Overwatch, it is working with ESL and DreamHack for Reforged events from the start. The original Warcraft III came out back in 2003, when esports were a smaller market, but it did still have its own Championship Series.