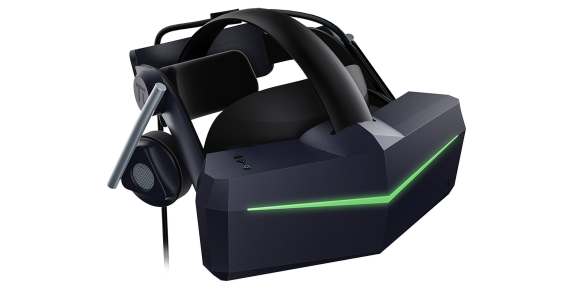 Chinese developer Pimax drew lots of attention by announcing an 8K VR headset in 2017 — well before competitors were ready to do so — but struggled to actually mass-manufacture it and deliver it to customers. Just in time for the 2020 CES, however, the company is claiming that the Vision 8K X headset has finally entered mass production, and announcing a new entry-level model at a $449 price point.

If you’re unfamiliar with the 8K X, the $1,299 headset uses twin 4K displays and an optional upscaler to deliver nearly 16.6 million pixels of “native” display resolution, or almost 7.4 million pixels upscaled. Because Pimax is placing the equivalent of two TVs next to each other, the diagonal field of view is a super wide 200 degrees, and the “hammerhead” housing is abnormally wide compared with most other VR headsets.

The major problem with such a high-resolution display is actually filling it with pixels at a high enough frame rates to prevent nausea. In addition to demanding a high-end Nvidia RTX 2080 or better GPU for native mode, Pimax capped the refresh rate at 75Hz (or frames per second), but gave prospective users another option: You can use the lower pixel count with 8K X’s hardware upscaling to hit 90Hz, resulting in support for lower-specced (RTX 2060 or above) video cards.

Today, Pimax announced that the finished version of 8K X will actually hit 120Hz in upscaled mode, with 90Hz and 72Hz fallback modes, while the native mode’s 75Hz rate remains the same. Similar updates will enable the 8K Plus model — which is apparently in the hands of a small number of customers — to run at 110Hz with upscaling, with the 5K Plus gaining a 120Hz mode with reduced 180-degree field of view.

A new $449 model, called Artisan, will use a housing similar to its higher-resolution brethren but offer lower specs. Each eye will get a 1,700 x 1,440-pixel display with a collective 170-degree field of view, enjoying the same 120Hz, 90Hz, and 72Hz refresh rates as the 8K X. This model will need only a GeForce GTX1050Ti. There will also apparently be another midrange model, Vision 5K Super, with 2,560 x 1,440p resolution for each eye and the option of 90-180Hz refresh rates if you’re willing to shift between 150, 180, and 200-degree fields of view. Pricing hasn’t yet been announced.

Nor have ship dates, but if Pimax’s track record is indicative of anything, holding your breath probably isn’t advisable. The company’s Sword and Sword Sense VR controllers, which were promised last May to “ship out in quantity” starting in the second half of last year, were subsequently delayed until mid-2020 and have largely disappeared from the company’s website. It remains to be seen whether any or all of this new hardware actually makes it into regular consumers’ hands anytime soon. Meanwhile, high-end VR headset competitor VRgineers announced the XTAL 8K headset for enterprise use this week, and says it’s already shipping units to government customers.