Parents of a newborn lose about six weeks of sleep in the first year alone. Those days are a distant memory for me. But plenty of new parents in the thick of this battle are in need of restoring balance and rhythm to their lives. They need to establish a sustainable cycle for their baby’s sleep patterns.

4moms, maker of the Mamaroo baby rocker, recognizes that parents aren’t invincible. So the company has followed up on its Mamaroo infant seat and created a 4moms Mamaroo Sleep Bassinet, which can sway and soothe a baby (see video) using motions that mimic what parents do, said CEO Gary Waters, in an interview with VentureBeat. It can also play noises that put the baby to sleep.

This made me think of a father watching a football game or playing a video game, while trying to cosset a baby. Waters said that we all have these moments where we need a break, and it’s OK to use something like a soothing bassinet to keep a baby happy.

The Bluetooth-enabled bassinet has five rocking, swaying, or vibrating motions, as well as four different white noise options to get your baby to sleep.

Many TVs and monitors refresh their screens at 60 frames per second, or 60 hertz (Hz). But that’s too slow for gamers, who over the years have been the first to adopt screens that have refresh rates of 120Hz or 240Hz. But at CES, Nvidia and Asus came out with a new G-Sync gaming display technology that can run at 360Hz.

I played with the new monitor at Nvidia’s place at the show, and I was shocked at how much better I could play a round of Counter-Strike: Global Offensive. When it came to both reaction timing and accuracy, I was able to improve my play greatly. In one test on a 60Hz screen, I couldn’t hit any targets with a sniper scope. But at 360Hz, I hit four targets. On the accuracy test, I hit seven targets in 45 seconds on the CS:GO test on the 60Hz monitor. On the 360Hz monitor, I hit 13 targets.

I also saw another journalist who was better than me run circles around my scores, and he also did much better with 360Hz, as you can see in the video. The 24.5-inch display will debut later this year.

Charmin’s vision for a better bathroom includes RollBot. When summoned with a smartphone using Bluetooth, it delivers a fresh roll of toilet paper to you so you won’t be stranded.

Its futuristic design uses self-balancing technology, with a bear-like look to the front panel. I saw it working in Procter & Gamble’s booth at CES. The robots were fairly small, but sturdy enough to deliver a roll of ultra-soft to someone in need.

Charmin notes that people use the bathroom six or seven times a day, and spend on average 156 hours a year on the toilet. But the tech is largely the same as it was a hundred years ago. 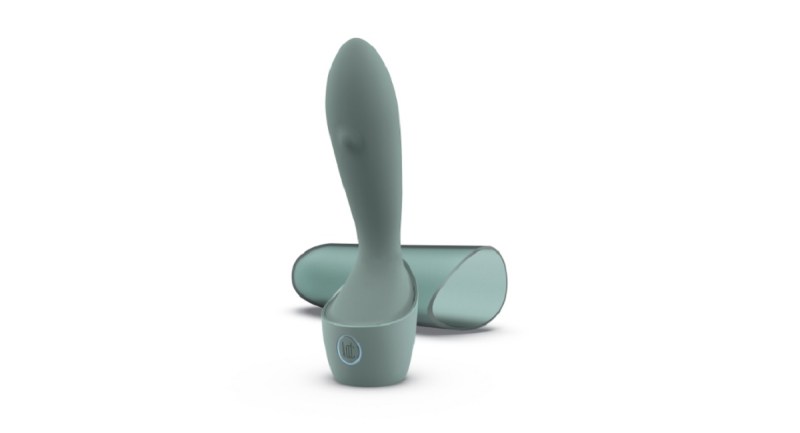 Above: The Osé Onda uses microrobotics to stimulate G-spot orgasms.

I can’t say I’ve tried this orgasm giver-outer. But I did get to see a demo that showed those microrobotics in action at the Pepcom party. Looks like fun to me, and more importantly, it showed that female entrepreneurs such as Lora Dicarlo CEO Lora Haddock could bring diversity and sensitivity to a market that had long been dominated by male-oriented sex companies.

And while there is competition, Lora DiCarlo is the company whose ideas about microrobotics sex toys paved the way for sex-positive products to be on display at CES. Along with other pioneers in the sex tech business such as Lioness, Lora DiCarlo helped convince the Consumer Technology Association that female-friendly technology had as much right to be at the show as male-oriented companies that didn’t have nearly as much technology. 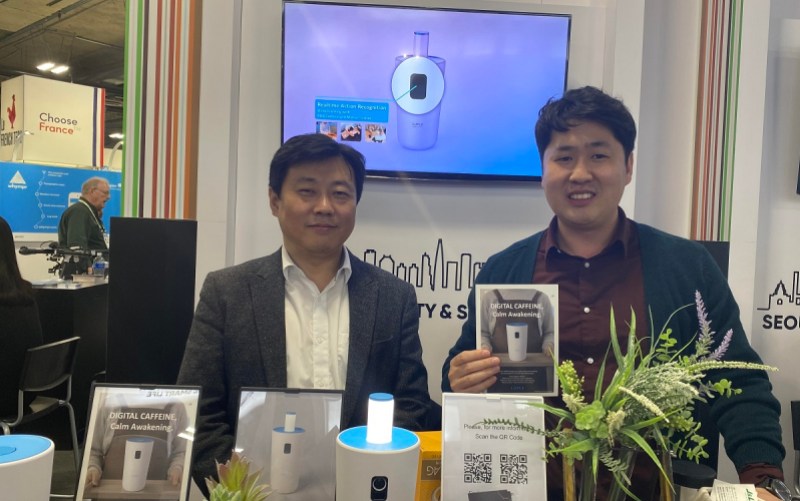 Luple is a South Korean startup that spun out of Samsung to create “digital caffeine.” The team led by CEO Yongduck Kim and CTO Namsu Lee figured out that certain wavelengths of light could have different effects on people. One kind of light-emitting diode (LED) light could make people feel more energetic, and another could make people feel more relaxed so they could go to sleep, Lee said in an interview with me.

If you are studying and want to be able to concentrate, Luple will show you one kind of light. If you are sleepy and want to take a nap, it will shine a different light. The company is studying what kind of wavelength is healthy for the human body, and it says this “human-centric lighting” keeps you more alert than a cup of coffee. And Luple is one of a new group of companies that is leading the way with non-drug treatments for physical problems such as drowsiness or sleeplessness. 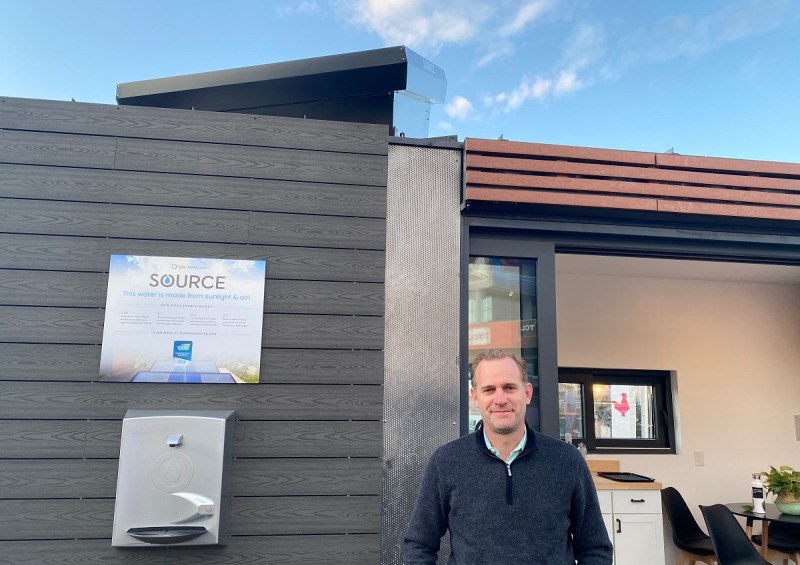 Above: Cody Friesen is CEO and inventor of Zero Mass Water’s Hydropanels that pull water from air..

As I noted last year, Zero Mass Water is one of those companies that will change the world. The technology is like something out of Frank Herbert’s classic science fiction novel Dune. It comes as a time when Australia is in flames and Syria’s ghastly civil war was caused in large measure by a severe drought.

Zero Mass Water created the Source Hydropanel, which can extract water from air and electricity. It does so by using air and solar panels to create the right conditions to speed the process of condensing water from even arid air.

That is magic, as it requires no electrical input, pipes, or public utility infrastructure. It is a way of using the resources that are already in abundance around us — the water that exists in our air. It is the brainchild of Cody Friesen, associate professor of materials science at Arizona State University.

And now the company has some new innovations. The Source Rexi Hydropanel is half the size of the previous version, is easier to install, and can produce more water on a daily basis.

The company is also introducing its new “water-as-a-service” business model. Friesen said in an interview it has deployed multiple Source Fields, or large-scale hydropanel arrays that create an ongoing supply of water for communities and businesses.

In places like Dubai and Australia, cities are purchasing large amounts of Source Field water. Friesen said his own home in Arizona now operates on a couple of Zero Mass Water’s Source Hydropanels, which produce more than 600 bottles of water a month, or more than enough for his family of four. And he lives in the dry air of Arizona.

Once again, I had a chance to drink Zero Mass Water’s water at CES, as I downed a cool cup of the company’s water from a rooftop Source Rexi Hydropanel. 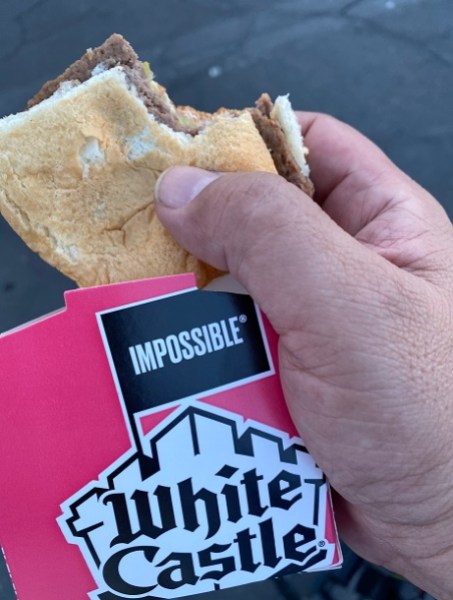 The Impossible Burger 2.0 is on a mission to save the lives of a lot of cows. And now the company, Impossible Foods, is going to save some pigs too, as our porcine friends are the most popular food in the world.

Last year, Impossible Foods made its debut at CES 2019 and showed off version 2.0 of the Impossible Burger. It tasted much better than its predecessor and other veggie burgers because it was spiced with heme, an iron-containing molecule in blood that carries oxygen and is found in living organisms.

It was founded nine years ago by scientist Patrick Brown, a Stanford professor who felt that our habit of eating meat wasn’t sustainable. Brown figured out that if he could generate a lot of heme from plants, he could recreate the taste of animal meat. Chains such as Burger King have adopted the meatless burger.

And now Impossible Foods has created a meatless version of pork. I tried it out and it tasted good. There’s a lot of tech in this food as well, and let’s hope it will save a lot of pigs. The company’s goal is to eliminate animal farming by 2035.

Procter & Gamble showed up at CES 2019 with the Opté Precision Skincare Wand. And it came back this year with an even better version.

It scans your skin with a blue LED light to find your age spots. A microprocessor analyzes the age spots and customizes a serum/makeup combination to instantly to apply to them. It uses inkjet technology to deposit the customized serum to cover each imperfection, careful to avoid putting the serum on non-blemished skin.

I played guinea pig once again, and Thomas Rabe, the inventor of the Opté (funded by P&G Ventures), waved the wand over my face, magically covering up my age spots. It’s only temporary, and lasts about a day, akin to makeup. But the serum can help improve your skin over time.

It took 10 years of development and over 40 patents to bring it to market. Opté, with proprietary algorithms and printing technology, can treat just about any kind of skin. It doesn’t use expensive lasers, lightening creams, or makeup. P&G expects it to come out this year as a premium product, but it hasn’t set the price yet, Rabe said in an interview with VentureBeat.