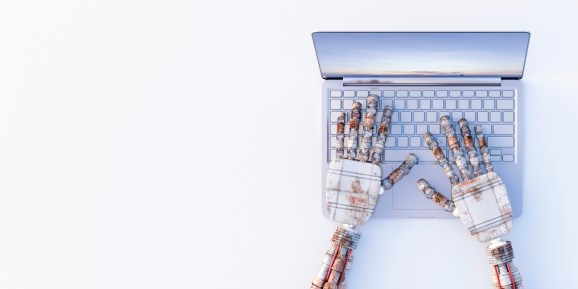 A court in Shenzhen, China, has ruled that an article generated by artificial intelligence (AI) is protected by copyright, according to state news outlet China News Service, representing a notable milestone for AI’s credentials as a creative force.

For the past five years Chinese tech titan Tencent has published content produced by automated software called Dreamwriter, with a focus on business and financial stories. In 2018, an online platform operated by a company called Shanghai Yingxun Technology Company replicated an AI-generated financial report from Tencent on its own website. The article included a disclaimer that said it was “automatically written by Tencent Robot Dreamwriter”; however, the court found that the article’s articulation and expression had a “certain originality” and met the legal requirements to be classed as a written work — thus it qualified for copyright protection.

While the defendant had already removed the article from its own website, it was still required to pay a fine of 1,500 yuan ($217).

AI has increasingly infiltrated most industries in recent years, and the creative arts are no different. Google has created an AI-powered tool called AutoDraw, for example, that identifies what someone is trying to draw and then recreates it in digital form.

Elsewhere, there are mobile apps that can transform your snapshots into ultra-realistic pieces of art, we’ve seen AI-assisted pop songs, and there is even a short film scripted by a neural network.

Tencent isn’t the only company publishing journalistic content written by algorithms. The Associated Press (AP) uses AI for baseball coverage and earnings reports via a partnership with Automated Insights. Chicago-based Narrative Science offers something similar, with a specific focus on business intelligence for the enterprise, or “data storytelling,” as it calls it.

The technology works best on data-focused articles, where someone just inputs numbers or stats and the AI constructs an article around it — they’re hardly going to win a Pulitzer prize, but hey, they’re perfectly readable.

Here’s a report from a baseball game in the New York-Penn league, written by Automated Insights’ software and published by the AP:

STATE COLLEGE, Pa. (AP) — Dylan Tice was hit by a pitch with the bases loaded with one out in the 11th inning, giving the State College Spikes a 9-8 victory over the Brooklyn Cyclones on Wednesday.

Danny Hudzina scored the game-winning run after he reached base on a sacrifice hit, advanced to second on a sacrifice bunt and then went to third on an out.

Brooklyn regained the lead 8-7 after it scored four runs in the seventh inning on a grand slam by Brandon Brosher.

State College tied the game 8-8 in the seventh when Ryan McCarvel hit an RBI single, driving in Tommy Edman.

Reliever Bob Wheatley (1-0) picked up the win after he struck out two and walked one while allowing one hit over two scoreless innings. Alejandro Castro (1-1) allowed one run and got one out in the New York-Penn League game.

Vincent Jackson doubled twice and singled, driving in two runs in the win.
State College took advantage of some erratic Brooklyn pitching, drawing a season-high nine walks in its victory.

Despite the loss, six players for Brooklyn picked up at least a pair of hits. Brosher homered and singled twice, driving home four runs and scoring a couple. The Cyclones also recorded a season-high 14 base hits.

This story was generated by Automated Insights (http://automatedinsights.com) using data from and in cooperation with MLB Advanced Media and Minor League Baseball, http://www.milb.com.

While AI will undoubtedly make bigger strides in the creative realm in the years to come, one big question will continue to rear its head: Who owns the copyright?

An article published by the World Intellectual Property Organization (WIPO) Magazine back in 2017 sought to make some sense of the situation. There are two potential routes that copyright law can take in creative works where “human interaction is minimal or non-existent,” according to article author Andres Guadamuz, a senior lecturer in intellectual property law at the U.K.’s University of Sussex. “It can either deny copyright protection for works that have been generated by a computer, or it can attribute authorship of such works to the creator of the program,” he said.

In the case of Tencent in China, it seems that the court elected to go with that second option — as the software creator, Tencent managed to convince the powers that be that it should own the copyright for all stories the software produces.

This may set a precedent for similar future cases in China, but courts in other jurisdictions globally may not see things the same way — in the U.S., for example, the Copyright Office has a strict “human authorship” requirement. “The U.S. Copyright Office will register an original work of authorship, provided that the work was created by a human being,” it said. “The copyright law only protects ‘the fruits of intellectual labor’ that ‘are founded in the creative powers of the mind.'”

It’s worth noting that such legalities aren’t limited to machines, as evidenced in the famous “monkey selfie” case a few years back. British photographer David Slater “engineered” a scenario that culminated in a monkey taking pictures of itself with one of his cameras — Slater tried to claim copyright ownership for the photo, but ultimately failed. In an interesting twist, The People For The Ethical Treatment of Animals (PETA) filed a lawsuit against Slater on the monkey’s behalf, in which they tried to claim copyright ownership on behalf of the monkey — PETA also failed.

The underlying issue at play here is that laws around the world are struggling to keep apace with the AI onslaught — but there are signs that things are changing. Last August, the U.S. Patent and Trademark Office (USPTO) put out a call to experts and the public at large to determine what impact AI will have on intellectual property, and more importantly “whether new forms of intellectual property protection are needed.”

This is clearly a debate that will continue to rage in the coming years. But at least one court now agrees that creative output with limited direct human input is protected by copyright law.