Stern Pinball has built its business on nostalgia, so it’s no surprise that its next table is based on Stranger Things, the hit Netflix show that itself is built around nostalgia for the past.

I visited Stern’s booth and talked with founder Gary Stern about his business, which targets affluent folks who don’t mind spending $5,000 to $8,200 for something that reminds them of simpler times and simpler games. He gave me a tour and described the Stranger Things table.

Stern has lived his entire life around pinball games, as his father owned Williams, the pioneering pinball company. And Stern started Stern Pinball in 1986. He sold his Melrose Park, Il.-based firm to Sega in 1994 and then bought it back in 1999. That set him up to be the high priest of the church of the silver ball. 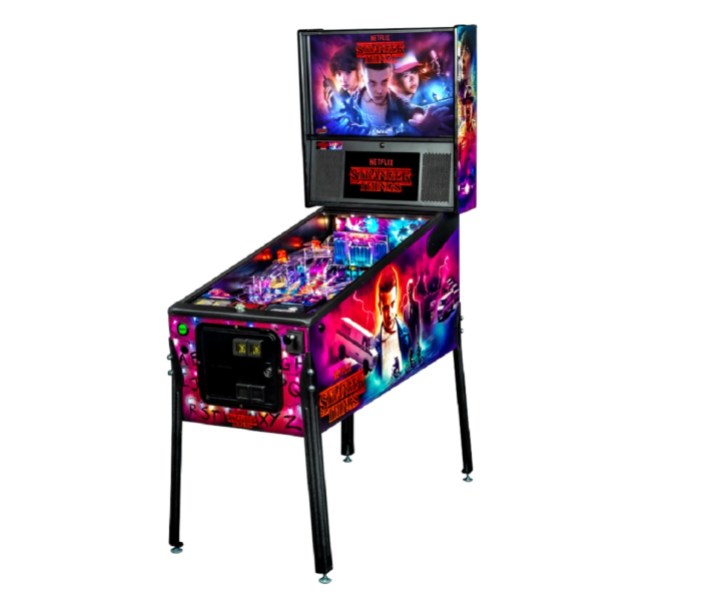 Gary Stern: Yes, that’s our new one. We’re just starting production. We do three cornerstone games a year, our main title games. We make them more than just for part of the year. We make them for a few years. We have a pro, a premium, and a limited edition. Good, better, best. Around the corner we have the pro version. This is the limited edition. There’s something very unique in these two games. They have a projector in the lower left corner that projects all kinds of images onto the game.

We can show lots of instructions on the LCD. We can show video from the TV show on the LCD. I don’t have to describe Stranger Things to you, probably.

GamesBeat: Is this the first time you’ve been playing video up there?

Stern: No, we’ve been doing it for a while. This projects onto the white screen here. We’re going to show different animations there, different video. Right on the drop targets there, you have to knock them down to spell “Will,” and then “Run!” There are lots of different things we can spell. We can show different values on the ramps and the targets. It gives us a bigger canvas and a way to change the game and create more variety of things to do.

There are more features on the premium and the LE, but the pro is still a great game. These, you don’t have a projector. You have solid art there. Shooting up this ramp on the premium and LE, there’s a magnet there that will catch the ball and hold multiple balls. We’ve already built some of the pro version, which is the one around the corner here. We’ll start making the LE for collectors and enthusiasts late this month, and in February we’ll work on the premium version. The pro is more for the rec-room buyer and the operator, but there’s crossover.

In addition we have a few other games we’re showing. We have our Star Wars, the in-home version. It’s not coin-operated. It has a full-size playfield. It’s a very good-playing game. The footprint is a bit smaller, but it’s a lot of fun. Over here we have another Star Wars that we’ve redone with comic artwork. That’s a premium version.

You notice we’re all wearing these shirts. We’re doing everything pinball now. We have merchandise and accessories around these games. We have digital pinball, on Switch and everywhere else. We do all kinds of stuff. We’re creating a pinball community and a global lifestyle brand. Looking at the pinball business, our studies show that we have 85 percent of it. The amount of growth available–our studies say it could be a billion-dollar business. We have a long way to grow. 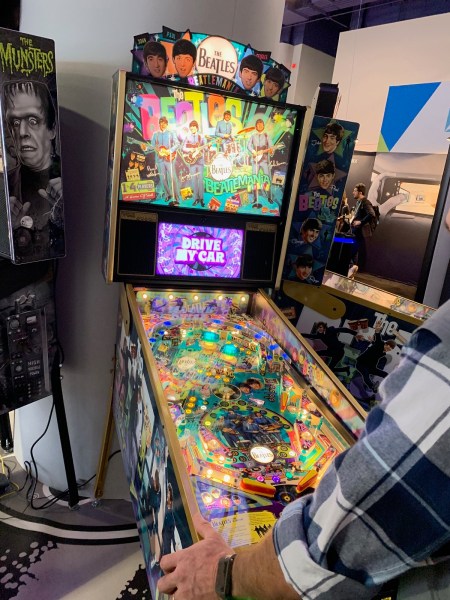 Above: Stern Pinball’s The Beatles game from 2019.

GamesBeat: How low can you bring the price of these? Would you actually want to ship machines that are fairly low-priced, or do you want to stay in a more premium segment?

Stern: We definitely think there’s a market for the rec-room buyer. We need to expand pinball. The home version has a $4,599 MSRP. It’s coming down. We want to bring it down. We’re looking at how we can continue to evolve and learn more. This is always a work in progress.

As you know, there are some very inexpensive, smaller games here. That introduces people to pinball. Maybe that’s a starter. But we believe in real pinball — ball and bat, the whole thing.

GamesBeat: You think pinball for the masses is possible, then.

Stern: First of all, pinball is for the masses because it’s on the street. We track a thousand arcades in the U.S. alone now. That’s something that didn’t exist five to seven years ago. Each of those has, on average, 10 pinball machines. That’s great growth. The family entertainment center business is growing, too, partly because the brick and mortar retail business is not. There’s all kinds of space available. Many of those FECs have our games in them.

We’re expanding for everybody to go play. We’ve crossed the millennial divide. The young people know about pinball — partly from their phones, partly from finding the Barcades, partly from going out. The brewpubs are growing and they’re starting to put in pinball machines. It’s a ball and bat game. It’s fun. Nothing too serious. Not our collector machines. Just fun.