GamesBeat is publishing this exclusive excerpt of Content Rated By: An Oral History of the ESRB. Previous chapters can be found here.

To help commemorate its 25th anniversary, the Entertainment Software Rating Board (ESRB) reached out to Blake J. Harris, the best-selling author of Console Wars: Sega, Nintendo, and the Battle That Defined a Generation and The History of the Future: Oculus, Facebook and the Revolution That Swept Virtual Reality to document the behind-the-scenes origins of the rating system for video games and how it has evolved over the past quarter century. Content Rated By: An Oral History of the ESRB provides eyewitness accounts from the key people involved in the ESRB’s creation and its development into one of the country’s finest examples of industry self-regulation.

On September 16, 1994, the ESRB opened its doors and started to assign ratings. Due to the relatively poor record-keeping at the time, which according to current employees was once just “an Excel spreadsheet,” there remains a lingering mystery about which games were actually the first to receive rating assignments.

Poor record-keeping aside, the ESRB continued to focus on assigning ratings, and gradually became a more recognizable part of the industry. Unlike the launch of the industry’s new trade show, there wasn’t that singular moment of gratification. But one year after facing the threat of government regulation, that worst-case scenario seemed unlikely to come to pass.

DON JAMES (NINTENDO): I don’t remember it being a formal process where the government said, “okay, we’re not going to bother you guys anymore because you’ve done this.” I think it slowly sort of just ebbed away. Once the ratings system came out, the irons in the fire cooled off.

Meanwhile, as the threat of government regulation dissipated, the ESRB came to face a new immediate challenge: a competing ratings board called “RSAC.” RSAC was short for the “Recreational Software Advisory Council” and it had been created by the Software Publishers Association (SPA) as an alternative to the ESRB.

Like the ESRB, RSAC was an independent, self-regulatory body whose mission was to inform potential consumers about the nature (and suitability) of the content it evaluated. But it differed from the ESRB in significant ways, a few of which are noted in this excerpt from a 1994 Washington Post piece entitled, “Video, Computer game industries split on ratings.” 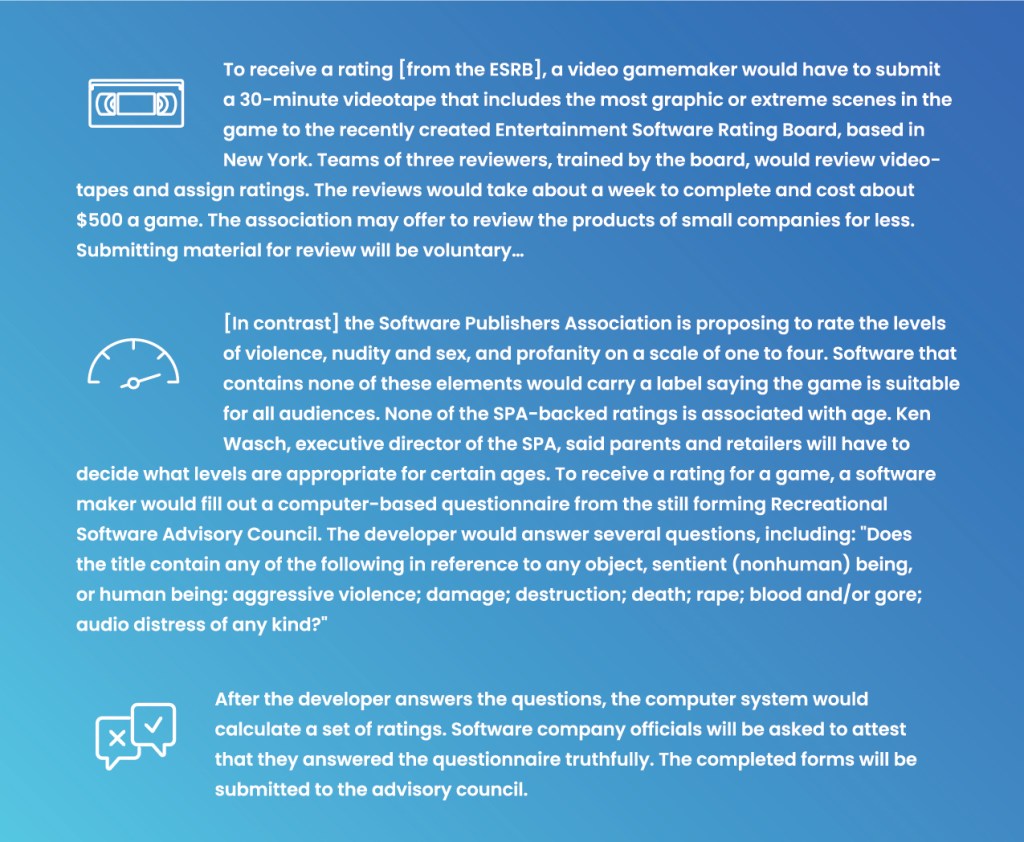 Above: The ESRB versus the SPA ratings systems

LISA SCHNAPP (ESRB): There was a competing board — RSAC — so we were always trying to knock them off and take their business.

Schnapp was among the first to join Pober’s small ESRB team. Having come from a string of administrative jobs at media outlets like Warner Bros., CBS News, and Polygram/Mercury Records, Schnapp initially served as a jack-of- all-trades at the ESRB. Over time, her role would evolve greatly, but early on, it was simply about organizational survival.

LISA SCHNAPP (ESRB):  When I took the job, my father said to me, “Do you know what you’re doing? Do you think this organization is even going to be around for a long time?” And I really didn’t know. In the early days, we were so small. There were hardly any people here. In fact, the person who ran ratings wasn’t even a full-time employee. So it didn’t help that there was this competing board. They mostly did PC stuff, and we mostly did console stuff; but we were kind of trying to just be the only rating board.

RILEY RUSSELL (SEGA): It was touch-and-go for a while on which rating system would win out.

By this point in time, Riley Russell — who had been the Director of Business Affairs for Sega—had left to join a different company that was planning to enter the console race: Sony.

RILEY RUSSELL (SONY): The key difference [between the two ratings boards] was that the PC guys did not want to do anything other than self-ratings. Which led Sony to make the decision that — in order to be on our system — you have to use the ESRB. I think Sega and Sony both deserve credit, but Sony particularly knew that the ratings would be important. At that point, it was by no means certain that PlayStation was going to win when things started. But just because of the chain of events, we went from being the “third platform” that everybody developed for but then because of the lateness of Sega’s tools and the limited launch, we became “the place to be.” And then it just took off.

As Sony took off, so did the ESRB — which begs the question as to why Sony, at such a fragile and uncertain stage of their console business, felt the need to take such a strong stance.

RILEY RUSSELL (SONY): Previously, Sony had made Betamax players and ultimately recorders. And they had an experience in that industry—and I don’t want to say this is over-arching—but…after that experience we realized it was important to let as much content onto your platform as possible. Because VHS probably won out because of porn. So we wanted to have edgier adult type content. Because we recognized (as Sega had recognized) that the industry was getting older; it wasn’t just a kid’s toy. In the end it was about a sense of responsibility. I think Sega was going to go that route anyway, but whether we were days or weeks ahead of them, we [at Sony] were the first to do it. Sony was looking at it as: we were getting into the market, we had a new console, we wanted to have something that offered families peace of mind. Sony has a reputation for making safe, reliable products…you know: we wanted to be “the IBM of the gaming space.”

Throughout the mid-90s, adoption of the ESRB’s rating system soared. Incidentally, during this time, the ESRB introduced its first organizational mascot: 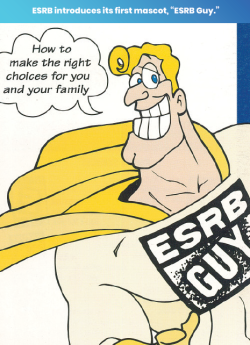 By the end of the decade — standing on much surer footing — the ESRB began to really expand.

LISA SCHNAPP (ESRB): Arthur was always looking to grow and take on things. For example: the privacy department…

ARTHUR POBER (ESRB): I didn’t want us to be just “the ratings service.” What we were was a full-service organization to make sure that this industry is regulated and regulated well. And I’m never quite satisfied, I’m always looking for what the next issue is. So what was that next issue? The issue of privacy. So I put together a special unit that would make us a seal provider.

In 1999, the ESRB launched its Privacy Online certification service. The following year, Pober set up another new group — the Advertising Review Council — which Lisa would run.

LISA SCHNAPP (ESRB): I always said, “If you want a paper tiger in this job, I’m not the right person.” I’m not just gonna sit and roll over. So I was really happy to take on that role. It’s a tough job, but an important one — making sure that all of the marketing complies with industry guidelines.

Given all the money that game companies put into marketing, it’s not surprising that Schnapp—as the face of the industry’s advertising enforcement—would become a well-known figure amongst the industry. And that her role would lead to situations like…

LISA SCHNAPP (ESRB): I remember one time I went to give this presentation and someone said, “You’re Lisa Schnapp?” “Yeah.” “Hey, you’re famous!” Infamous, maybe. I mean, I’m the person who goes out and issues the violations. So, a lot of people know me, yeah. Oh, and there was this other time — this is one of my favorites — someone wrote me a letter, and this guy was really angry about something, so he called me “The Overlord of the Darkside” [laughs]. I always really liked that.

RILEY RUSSELL (SONY): Overall, I think the ESRB was run well early on. There were hiccups, no one had really done it before — no one really knew how to “rate” a game — but I think that Arthur did a good job. He got it up and running. And he got us what we needed.

In many facets, this was true and, as such, the ESRB continued to thrive. But beneath the surface, there was a chink in the armor — which began to become an issue towards late 2000.

Specifically: in September 2000, when the FTC published a “Mystery Shopper” survey. What they had done was send in “undercover” shoppers (between the ages of 13 and 16) and sent these minors into stores — unaccompanied by their parents — to see whether retailers were enforcing rating systems. To find out, these mystery shoppers would attempt to buy one of the following four entertainment products: 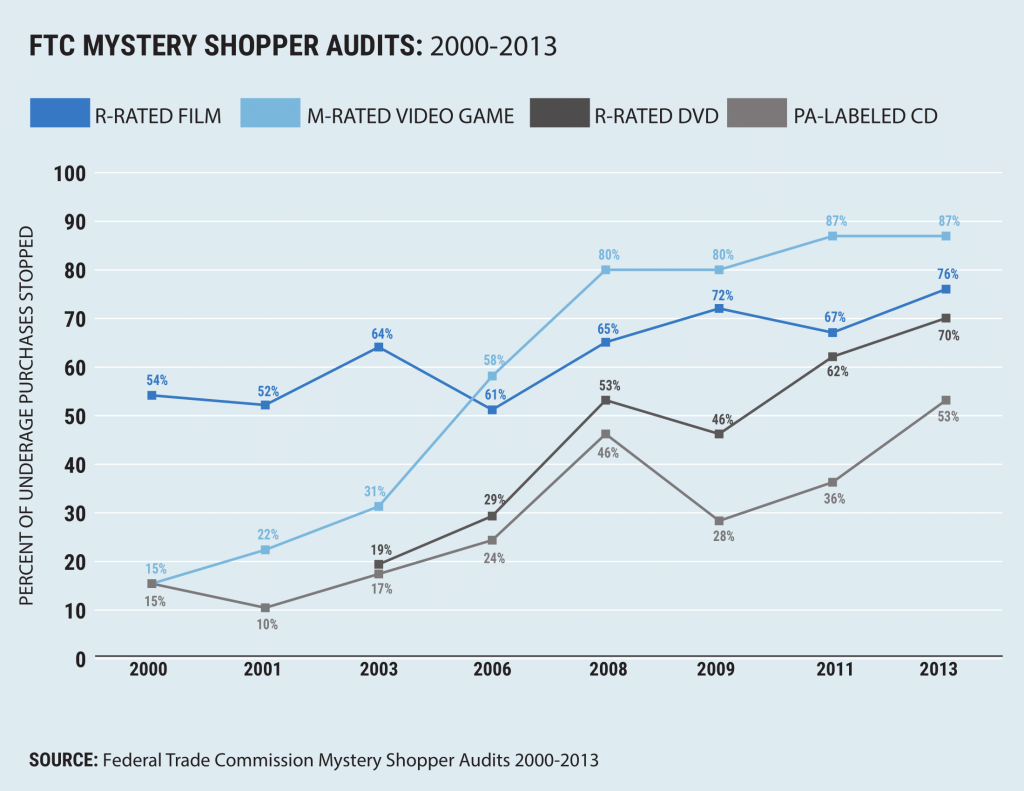 Above: The FTC’s “mystery shopper” audit

As such, this operation was by no means meant to target the game industry. But compared to those other industries, the enforcement of video game ratings proved to be the worst. The following year (2001), the FTC published another mystery shopper survey and the results were similar.

In 2002, IDSA — which was on the cusp of its own restructure and would soon change its name to the “Entertainment Software Association” (ESA) — decided that it was time to find a new president to run the ESRB.

DOUG LOWENSTEIN (ESA): The problem was, it was a really tricky search to do. Because it’s not like there’s a hundred people running self-regulatory rating boards. There’s not really an obvious pool of candidates out there. And that made it tough — really, really tough…

The next four parts of Content Rated By: An Oral History of the ESRB include how ratings are assigned, garnering support from video game retailers and how the ESRB created a scalable global rating solution to meet the needs of mobile app and other digital game storefronts. Part 5 will be published next week in the ESRB About section.

Blake J. Harris is the best-selling author of Console Wars: Sega, Nintendo and the Battle that Defined a Generation, which is currently being adapted for television by Legendary Entertainment.