Twitter’s ad network provides the best value for PC and console games marketing, according to a report by influencer marketing platform Gamesight.

Using data gathered from in-house marketing campaigns over the past year, the company compiled and ranked the most effective networks using parameters such as volume, reach, and conversion rate.

While it was clear that networks such as Google Ads would prove sufficient for reaching a large volume of players, comparatively smaller networks like CPM Star and Reddit Ads were able to convert players at a higher rate than its competitors.

Gamesight CEO Adam Lieb said in a statement that social networks meet the players where they are hanging out, targeting them in spaces where conversations among the community already take place. He said that ads on Twitter, Facebook, and Reddit seamlessly integrate into the user’s timeline, making it easy to engage with a piece of content as they would if it had been organic.

Gamesight’s goal with the report was to help advertisers make informed decisions for their brand by using data that is not readily available. 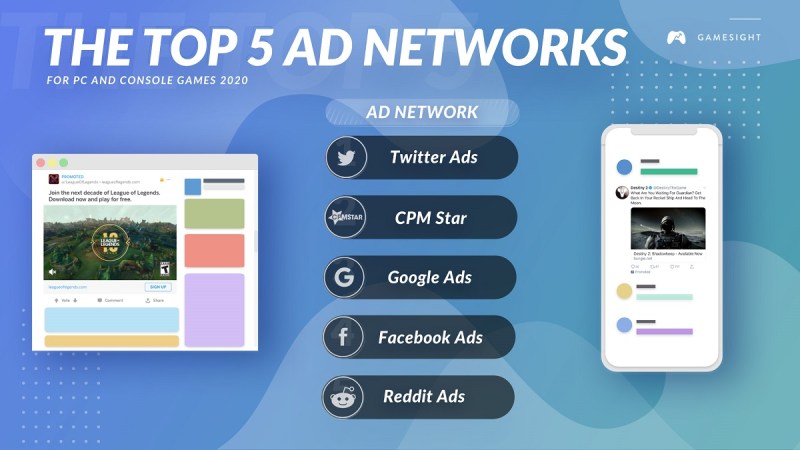 Above: Twitter rules when it comes to ad networks for PC and console games.

CPM Star had the most diverse reach, making significant impacts in countries like Germany and China with a conversion rate of over 4.3%. That means 4.3% of those who viewed the ad took some kind of action.

Google and Facebook Ads remain the best networks for volume. Both Facebook and Google were the most-used networks in Gamesight’s analysis. Each of the services reached millions of players across the globe. Despite their reach, these networks were on the lower end of conversion probability.

Social media advertisements are dependably successful in converting gamers into players. With 40% of U.S. adults between 18 and 29 years old on Twitter, developers can easily reach their target audience through the site. Online gaming and its communities are highly accessible via the internet, making it a no-brainer for businesses to advertise to them on their most-visited social networks.

Working with content creators on Twitch, YouTube, Mixer, Facebook Live, or even TikTok and Instagram can be a vital part of a successful marketing campaign. However, it is important to find influencers that will accurately represent a brand, with an audience who is the best match for a game. Hiring “the biggest” will not always net the best results. Instead, it’s key to identify creators who fit within a genre, build a relationship with them, and communicate needs and expectations, Gamesight said.