The mobile game industry is expected to generate $100 billion in revenue in 2020, up from $86 billion in 2019, according to App Annie, the mobile data and analytics researcher.

App Annie released the numbers as part of its State of Mobile 2020 report. This annual appraisal provides insight into mobile’s expansive impact across industries and the global economy, highlighting publishers and brands that are outperforming their peers.

Based on the report, games are now 72% of all spending in the app stores. Mobile games saw 25% more spending than all other games combined in 2019. Mobile game spending was 2.4 times the spending for PC and Mac games, and 2.9 times spending for home game consoles in 2019. 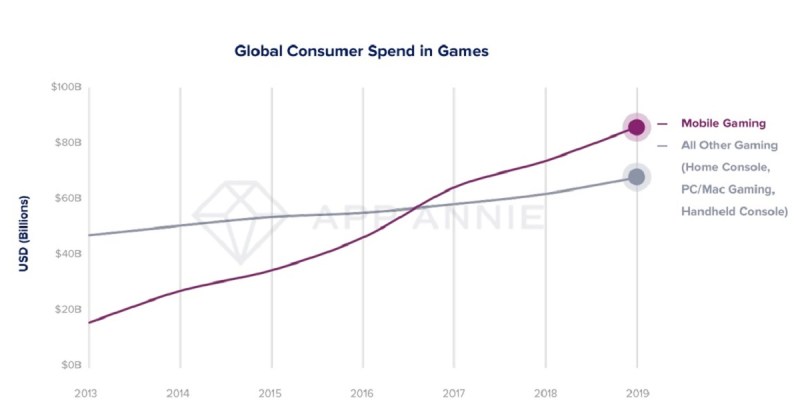 Above: Mobile games surpassed all other gaming in terms of spending in 2016.

App Annie said that mobile-focused companies such as Uber and Alibaba had a combined IPO valuation of $544 billion, or 6.5 times higher than companies without a mobile focus.

Brands continue to embrace the reach and value of mobile, bolstering the success of Snap, Facebook, Google, Twitter, and TikTok. Advertisers will pour more than $240 billion into ad spend in 2020 — up 26% from 2019.

Subscriptions accounted for 95% of spending. And three out of four top non-gaming apps monetize via subscriptions, with video and dating categories propelling app store spend as adoption of Tinder, Tencent Video, iQIYI, and YouTube climbs.

Tencent’s Honour of Kings, Sony’s Fate/Grand Order, and Activision Blizzard’s Candy Crush Saga are examples of games that are dominating on mobile.

Nearly 25% of Netflix’s iPhone users also used Disney+ in Q4 2019, the highest overlap of users among top video streaming apps in the US, demonstrating consumers pay for multiple services.

And Generation Z is becoming an increasingly strategic segment to business. Mobile is Gen Z’s native language. This demographic is highly engaged with apps: They have 60% more sessions per user in the most popular apps when compared to older generations.

Theodore Krantz, CEO of App Annie, said in a statement that mobile is fueling a digital transformation for brands and publishers worldwide.

The State of Mobile 2020 examines macro mobile trends; identifies which leading brands and publishers across gaming, fintech, retail, social, video, and others are winning on mobile; and shows how businesses can navigate and reach key demographics.