The Russian game market more than doubled in the past five years to more than $2 billion in 2019, according to Yandex.Checkout, a Russian payment service provider.

Historically dominated by free-to-play PC games, Russia’s market is shifting more toward mobile games in the past year, Yandex.Checkout said. 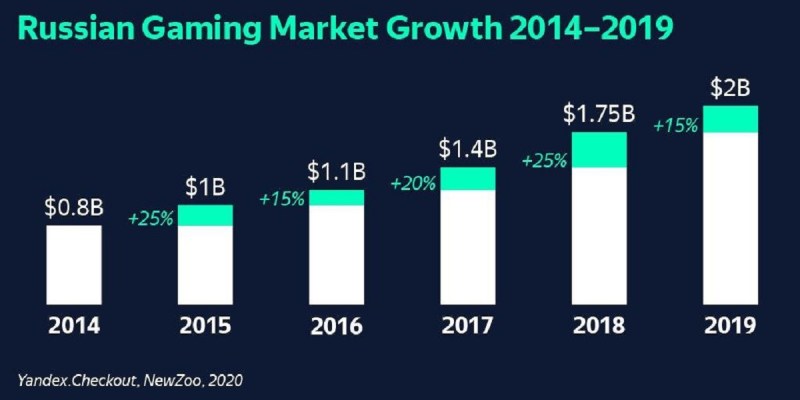 Above: The Russian gaming market is growing fast.

Consoles also saw significant growth of 19% to $240 million, which indicates a shift in customers’ preferences.

Yandex.Checkout is a joint venture of search engine Yandex and Russian bank Sberbank.

From 2014 to 2018, the overall revenues grew by 20%-to-25% each year. Yandex.Checkout said that the market has become more sophisticated and now will correspond with the global growth pace.

The average age of a Russian gamer is 36 years old. Sixty percent are men and 39% are women on the PC. Twenty-one percent of men and 13% of women play console games, according to market researcher NewZoo.

The majority (81%) of paying gamers spent money on in-game items or virtual goods in the past six months, with 36% of men and 42% of women buying power-ups. Thirty-eight percent of the online population watches gaming video content, with 65% watching on their PC.

The average transaction is falling due to the rise of micro in-game purchases and the growing popularity of loyalty programs. The reason for that popularity is public appreciation for F2P games, free trials, and bounty products.

The number of gamers with income above average is increasing among those who frequently spend on gaming.

In terms of payment methods, the most popular among the Russian gaming audience is bank cards (45%). Also, cards and e-wallet payments are fueling subscription growth.

Above: More Russians are paying attention to esports.

The streaming audience is consistently growing in Russia, with about 18 million gamers paying for gaming content or donating to streamers. That means about one out of every four online users from 14 to 54 is watching game streams.

According to Yandex.Checkout research, each gamer on average makes three purchases a month and also donates to streamers about three times a month.

Annual revenue of these money transfers accounts for about $18.5 million (11.6 billion rubles) with an average transaction of around $5.50 (350 rubles). The number of active streamers and sellers of in-game items stands at about 3 million people. 62% of them make money on streaming videos and sales of gaming content only, while the rest have become influential enough to promote goods and services from other segments.