Game developers favor the unionization of their industry. They consider the PC to be the best platform to develop games for. And they are excited about the coming next-generation consoles from Microsoft and Sony. Those are the results of a new survey of 4,000 game industry professionals.

One of the key results was that 54% of developers now favor unionization, compared to 47% in the survey from a year ago, said Katie Stern, general manager of GDC Events, in an interview with GamesBeat.

The Game Developers Conference 2020 is coming up in March, and the event is releasing its annual survey today on the state of the game industry. The eighth annual survey results suggest a heightened interest in development for next-generation game platforms including PlayStation 5 and Xbox Series X.

“It’s not overly surprising with PC kind of being the front runner again,” Stern said. “But what is interesting is where everybody’s starting to think of the next generation of platforms and what they’re developing for next. The current projects already include 11% for the PS5 and 9% for the Xbox Series X. It’s a notable rise in interest in the next-gen platforms.”

We also saw an uptick in interest in VR game development, which was potentially spurred by the release of Oculus Quest last year. Organized by Informa Tech, GDC 2020 takes place March 16 to March 20 at the Moscone Convention Center in San Francisco. The GDC drew 29,000 attendees last year, and about the same is expected this year, Stern said. 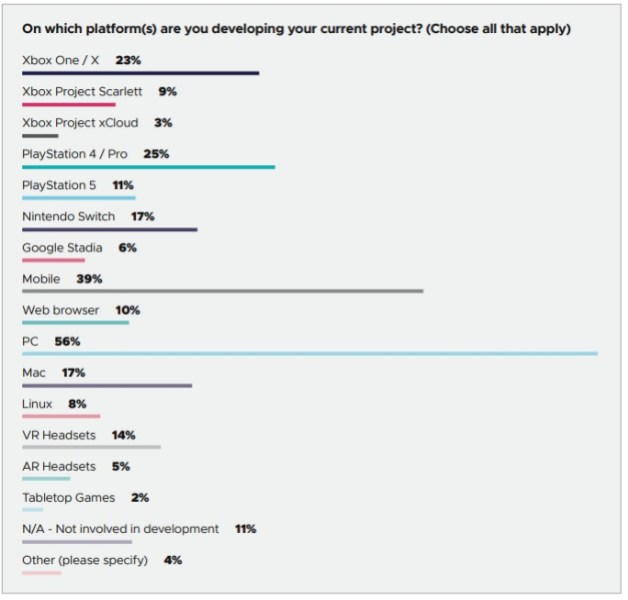 Above: Game devs are developing for 16 platforms now.

Continuing the trend from previous years, the survey asked respondents what platform their last game was released on, and the results reflect a consistent preference for PC and mobile consoles. But these results get more interesting when respondents detail their current projects.

Developers felt that the PC offered unmatched direct access to customers, but they weren’t fond of Valve’s Steam digital distribution service (see below).

While the majority of respondents said their current projects are being developed for the PC (56%) and/or mobile (39%), 11% of survey respondents said their current project is being developed for the PlayStation 5, and 9% said they’re currently targeting the next generation Xbox Series X (still known as “Project Scarlett” at the time the survey was conducted).

“We’re definitely in that transition period of people are moving off of the current platforms and into the next one, and trying to figure out what they’re most excited about,” Stern said.

The survey also inquired into how many respondents were working on games for Google Stadia and Microsoft’s Project xCloud, two high-profile game streaming services which made waves in 2019. 6% of respondents said they’re currently targeting Google Stadia and just 3% said they’re aiming to put their current project on xCloud, suggesting that developer interest in making games for these services remains nascent.

“The sentiment around [cloud gaming] is that it’s in its infancy,” Stern said. “It’s still a bit nascent.” 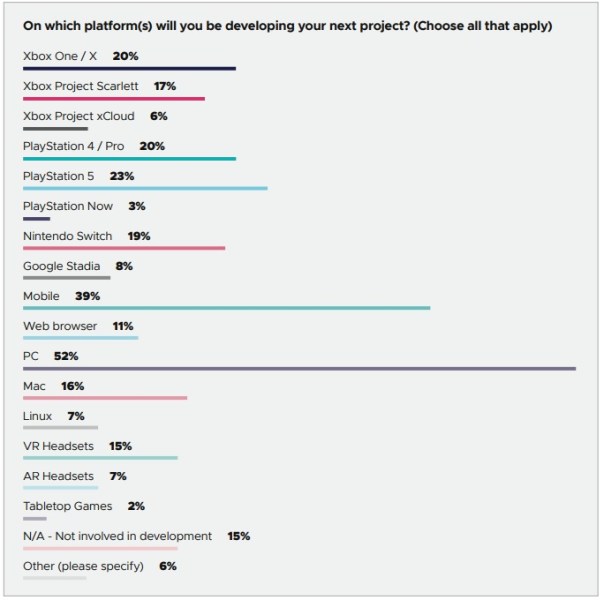 Above: Where developers are focusing their energies next.

Developer interest in targeting next-gen consoles increased a bit when respondents were asked what platform(s) they expect to launch their next project on. 23% said they expect their next game will launch on PlayStation 5, while 17 percent expected it would come to the next-gen Xbox. (Our own conference theme for GamesBeat Summit 2020 is “dawn of a new generation.”

37 percent said they’re interested in the Switch, suggesting that while the platform remains high up in developers’ estimation, the lure of new tech has taken some of the shine off Nintendo’s latest hardware, the GDC said. 72% said that they aren’t making any money on the Nintendo Switch. 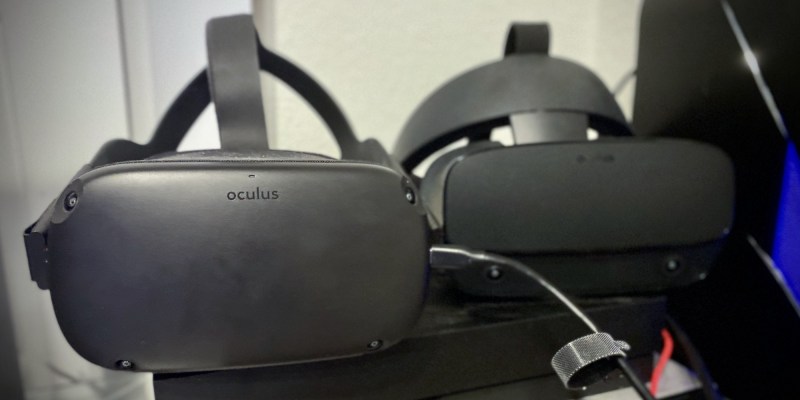 Above: Oculus Quest (left) connected to an Anker USB cable for Oculus Link, alongside the Oculus Rift S (right).

Faith in VR is rising, and current VR devs are shifting focus from the HTC Vive to Oculus and itsnew Quest headset.

For a few years the survey has been polling game industry professionals about which ‘immersive reality’ technology they think will be dominant in five years, and augmented reality has long been the most popular answer.

That held true this year, but surprisingly, the survey showed a significant year-over-year uptick in the percentage of respondents who believe VR will be dominant; one in three respondents (32%) said they think AR will dominate, while one quarter (25%) said VR. 19% expect AR and VR to be equally popular, 16% think neither tech will be important in five years, and 6% admitted they just don’t know.

Last year the survey reflected a similar pattern of responses, except back then (in 2018) only 19% threw in with VR as the eventual dominant immersive reality tech. It’s a small increase, one which may be influenced by the recent mainstream success of the wireless Oculus Quest VR headset.

Looking ahead, AR/VR devs seem chiefly interested in the Oculus Quest as the target for their next VR/AR game; when asked which AR/VR platform(s) developers expected their next game to release on, the most popular answer (with 24%) proved to be the Quest, followed by the Rift (20%) and the HTC Vive (17%). 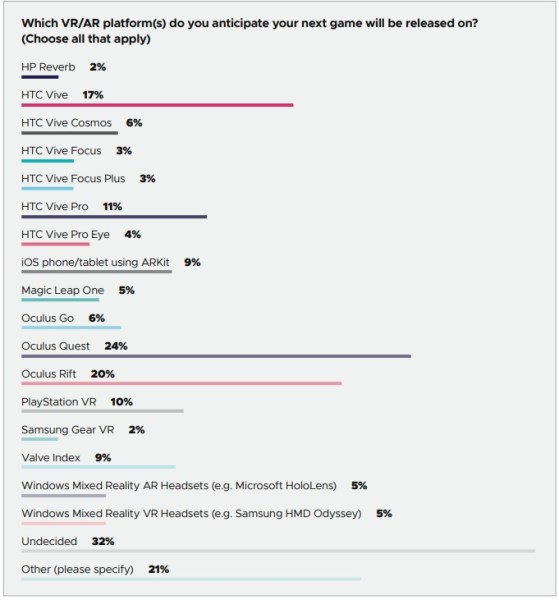 Above: Which VR/AR platform will developers target next?

However, 32 percent of respondents said they were yet undecided, leaving plenty of room for things to shift as the AR/VR mark et evolves. When asked the same question in 2019’s survey, developers gave the HTC Vive 28% of the vote, the Rift received 25% and the Quest received 13%, marking an 11 and 5 percentage point drop for the Vive and Rift, respectively, and an 11 percentage point jump for Quest. The Oculus Quest appears to have picked up that slack to become the most popular answer in this year’s survey. 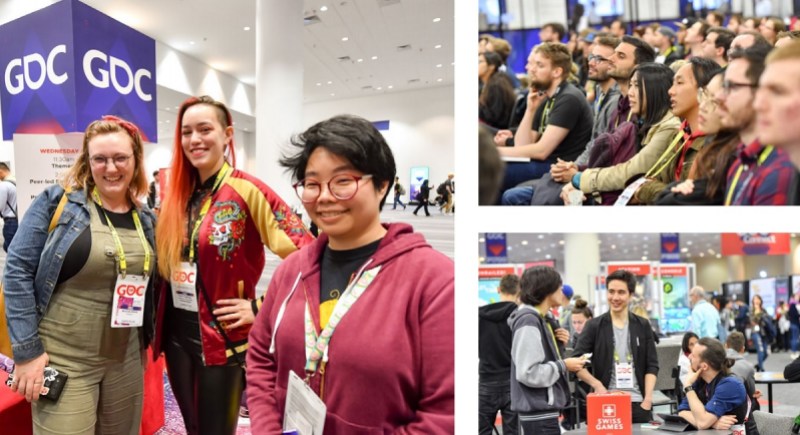 The majority of game makers think game devs should unionize; few think they will Unionization and labor practices remain hot topics in the game industry, and this year the survey found that when asked whether game industry workers should unionize, the largest share of respondents (54%) said yes. 21% said maybe, 16% said no, and 9% said they weren’t sure.

“Building on some of our conversations around unionization for our last couple of years, that continued to be a really hot topic that bubbled up in the survey,” Stern said. “We’ve noticed that a couple of studios in South Korea have already started to unionize.”

However, when asked whether they thought game industry workers would unionize, only 23% said yes; 22% said no, and the largest share (43%) said maybe. 12% said they just didn’t know.

When compared to last year’s survey, in which respondents were asked these questions for the first time, responses showed a small but significant uptick in confidence that the game industry should and will unionize.

As for crunch time, or unpaid and forced overtime work, the survey asked developers about that again in the 2020 survey. But while developers are working overtime hours similar to the past, much of it was “self-inflicted,” Stern said, “not the result of studio pressure,” at least in terms of the survey results.

The bulk of developers said they work 36 to 70 hours per week. Nearly half (45%) are still working over 40 hours a week. 59% of them said self-pressure was the reason that they worked long hours. Only 1% said they worked more than 90 hours in a single week. 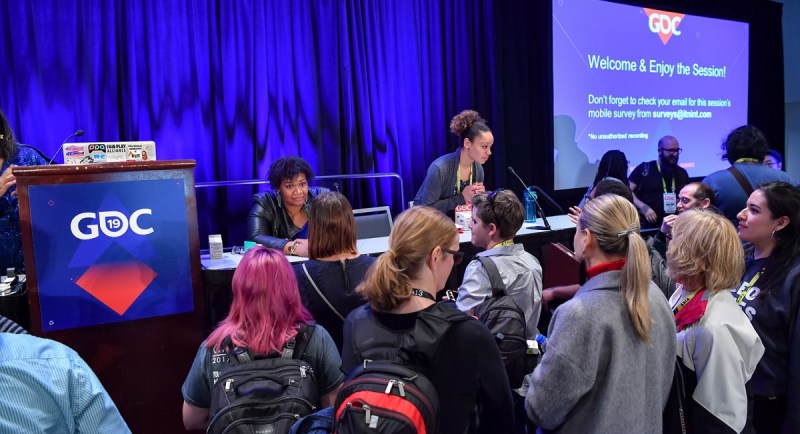 Above: Speakers and attendees interact at GDC 2019.

“We have a long way to go, but we are headed in the right direction,” Stern said.

About 55% of respondents were from North America, 25% were from Europe, and 9% were from Asia. 6% were from South America and 2% were from Australia or New Zealand. That’s not a surprise, given the GDC is in the U.S.

28% of developers said that studios don’t invest anything in staff inclusion and diversity issues. 16% said a little, and 24% said a moderate amount. 18% said a great deal, and 14% said a lot.

48% of developers said they aren’t incorporating accessibility features into their work, while 28% said they were.

The results of the diversity investments were viewed for the most part as successful, Stern said. 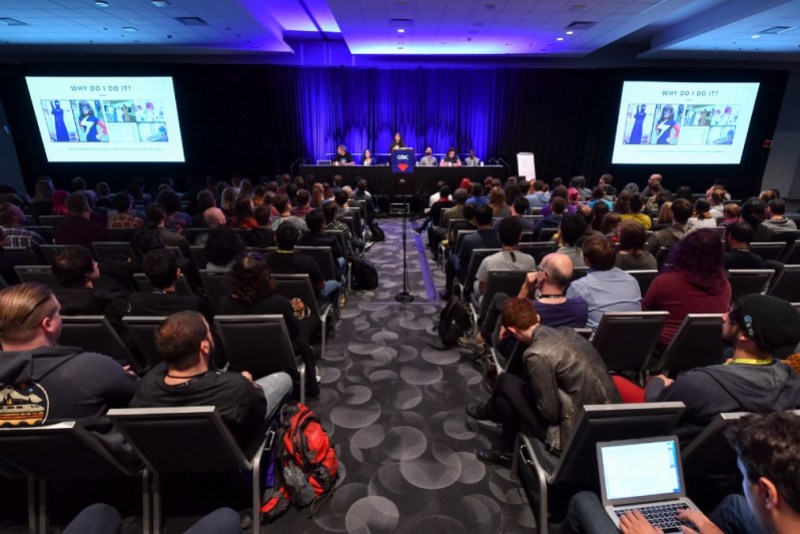 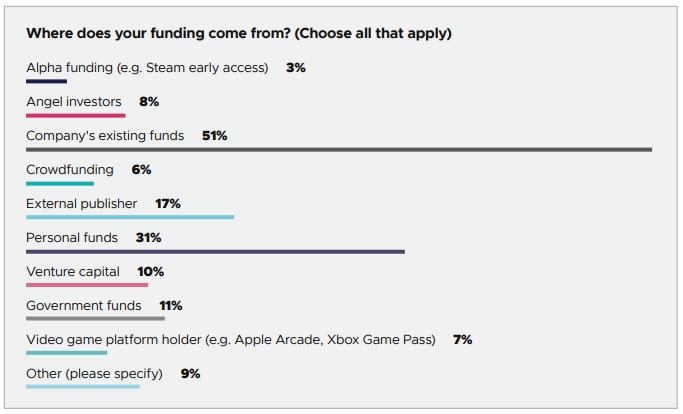 Above: Funding sources for games in 2020

As for funding sources, 51% said they use existing company funds. 8% use angel investors, 17% use external publishers, and 31% said they used personal funds. 10% used venture capital, 11% use government funds, and 6% turned to crowdfunding. 7% relied on a platform owner, and 9% marked “other.” More than 25% of developers are working with publishers. 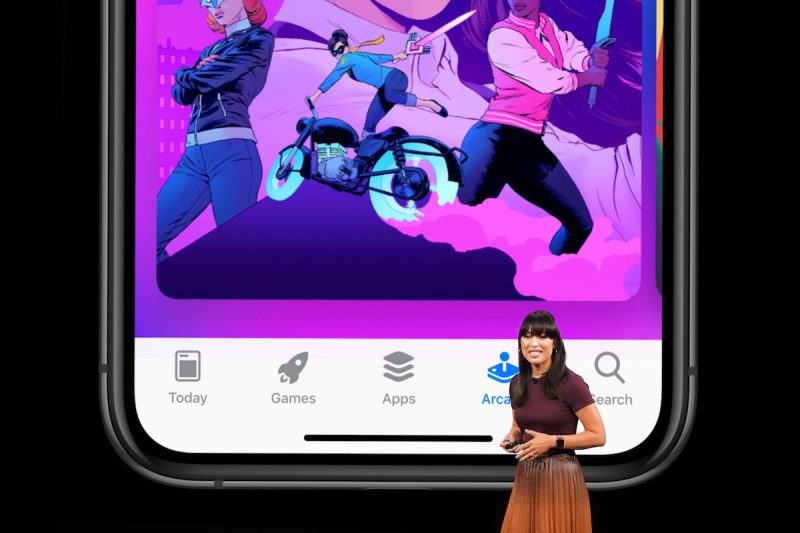 Above: Ann Thai “can’t wait” for Apple Arcade to launch.

27% said they are concerned that Netflix-style subscription services will devalue individual games. 28% said maybe, 26% said no, and 18% said they didn’t know.

Only 21% believed that the Apple Arcade subscription service would be a long-term success, while 35% said maybe. 19% said no, and 26% said they didn’t know. One developer said it was less confusing than Stadia, and Apple was making good on its commitment to provide high-quality games without “predatory business practices.” 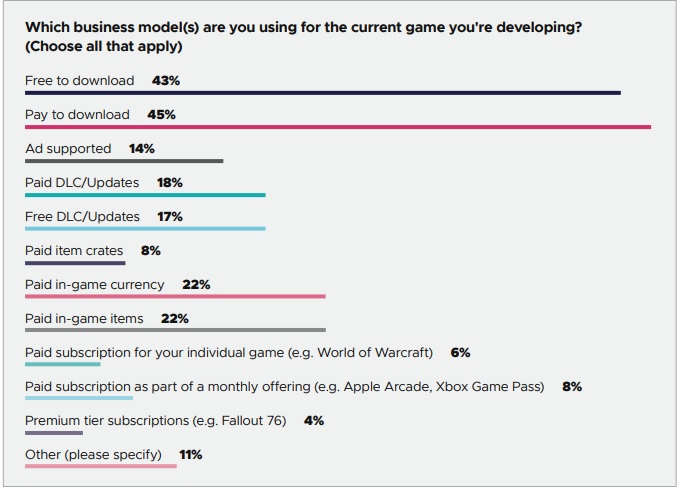 Meanwhile, 40% said that the Epic Games Store would be a long-term commercial success, while only 7% said no. 35% said maybe and 18% didn’t know. Developers saw it as competition for Valve’s Steam.

Only 7% of developers believed that Steam deserves the full 30% cut that it takes from online store sales. Most thought that 20% or less was more reasonable.

In other news this week, Stern said a main stage talk will return for the second year in a row (after a long hiatus in previous years) in the form of The Developer’s Impact, a series of talks about issues on the cultural and social impact of gaming. The speakers include Osama Dorias, lead game designer at Warner Brothers Games Montreal; Ziba Scott, optimist at Popcannibal; and Lyndsay Pearson, lead producer and general manager for The Sims at Electronic Arts’ Maxis. 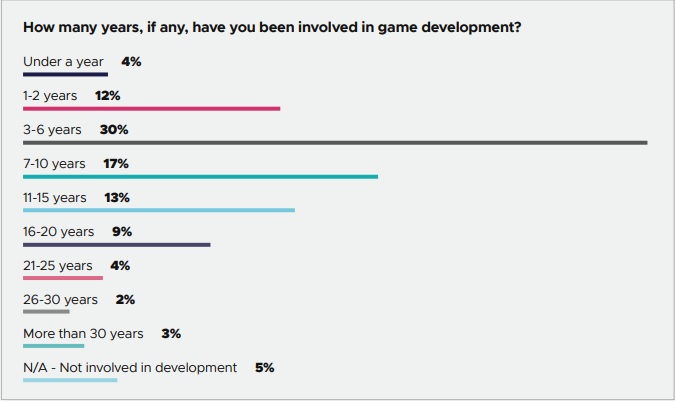 Above: The spread of experience in the game industry for developers.

“The point is bringing the community together in one place for like one really inspirational message that we can’t really accomplish in our very deep technical sessions,” Stern said. “So as long as we find a great story arc that makes sense for everybody, we’ll keep it up on the main stage.”