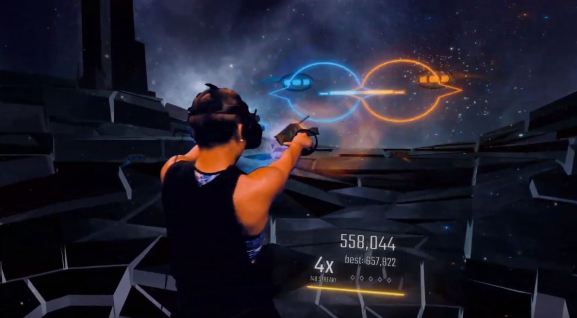 Initially announced last year at Oculus Connect 6, Audica is finally launching on the Oculus Quest on January 28. The Quest version of the music shooter was initially scheduled for a release last year, but will now launch next week after a small delay.

Oculus Quest is the last of a multitude of VR platforms that the game has reached. Initially launched on PC VR in early access, Audica left early access and also made its way to PSVR last year. The Oculus Quest version will also support cross-buy with the Rift version of the game, which is always welcome news.

We reviewed the game on PC VR back in early access, and had mixed feelings. While the game will probably be enjoyed by rhythm game fans, David did note that “if you’re picky about styles of music or already enamored with Beat Saber, we don’t think there is enough here to pull you in just yet.”

That being said, a lot has changed since early access, especially when it comes to the variety of song tracks. The PC VR and PSVR version of the game now have some very popular songs available as DLC, such as ‘bad guy’ by Billie Eilish and ‘Into You’ by Ariana Grande, which we can expect to launch on the Quest version of the game as well. That might sway some people into trying the game out.

Now that the game is out of early access and will soon be available on Quest, you can expect an updated review of Audica on the site soon, so keep an eye out for that.