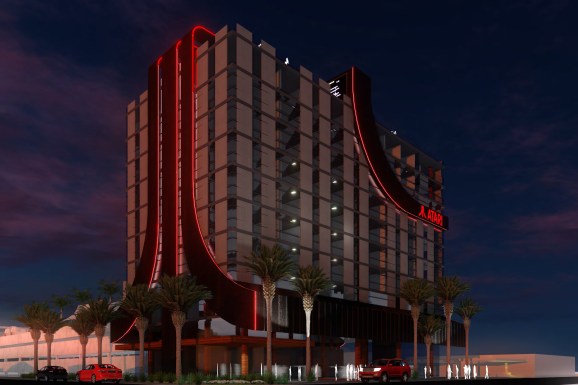 The Atari hotel is happening, apparently.

Atari was once the biggest name in gaming, but it has died multiple times since it reached its zenith in the early 1980s. But nothing from that era stays dead — not if someone can mine it and resell it as notsalgia. And Atari is taking that business model to another level with an Atari hotel in Phoenix, Arizona.

Atari is working with GSD Group to build a series of video-game-themed hotels across the country. The first one is opening in Phoenix, and the plan is to pack it full of entertainment that is tangentially related to Atari in one way or another. This includes accommodations for hosting live esports events. But it also means it will have VR/AR installations.

Of course, Atari isn’t really building hotels itself. GSD Group is a company that takes legacy brands like Atari and finds new ways to leverage them to generate both excitement and revenue. In this case, that means partnering with Phoenix real estate development company True North Studio that will actually build the space.

“We are thrilled to partner with GSD Group and True North Studio to build the first-ever Atari branded hotels across the United States,” Atari chief executive officer Fred Chesnais said. “Together we’ll build a space that will be much more than just a place to stay. Atari is an iconic global brand that resonates with people of all ages, countries, cultures, and ethnic backgrounds and we cannot wait for our fans and their families to enjoy this new hotel concept.”

While the building is still in the early stages, Atari says that it is planning seven more across the United States. If one comes to Denver, I know what I’m doing for my next wedding anniversary.

The video game generation has money to spend

“Atari Hotels will be the first of their kind in the U.S., offering gamers of all ages the ultimate in immersive entertainment and in every aspect of gaming,” GSD Group cofounder Shelly Murphy said. “We’re excited to be working on this project with such great partners and to bring a big win to Arizona.”

What this says to me is that the generation that grew up playing video games must have a lot of money now.

Now, it’s time to squeeze the money from the moms and dads that grew up on Pitfall and Asteroids. And while it’s easy to roll your eyes at an Atari hotel, I think that’s only because Gen Xers and Millennials aren’t used to shaping markets.

“When creating this brand-new hotel concept, we knew that Atari would be the perfect way to give guests the ‘nostalgic and retro meets modern’ look and feel we were going for,” GSD Group cofounder Napoleon Smith III said. “Let’s face it, how cool will it be to stay inside an Atari.”

If I’m being honest, I’ve never really thought about it, Napoleon.

But if I’m being even more honest, I really want to find out.

Of course I’m going to stay at an Atari hotel

Look, I’m a grown man with a family, and I don’t really care where we stay when we go on a trip. My wife used to plan trips for tour groups professionally, and she’s got a real skill at getting deals. I’m happy to let her handle that.

If we were to go to Phoenix, I would absolutely make a point of staying at the Atari hotel. Sure, it might be fun for the family, but it’s really just about me recapturing some small piece of my childhood.

So this whole thing is going to work — at least until Nintendo or Sega do the same thing. And that’s what is most wild about all of this. I had maybe one or two years of playing Atari 2600 in short spurts when I was 3 to 4 years old. I got a Nintendo Entertainment System when I turned 5 and never really thought about Atari again.

Yet, despite the minor role it played in my own youth, I’m still looking to Atari to bring some piece of that back. How some poster and themed drinks will do that, I don’t know. But with my apologies to La Quinta, the minor emotional investment I have in Atari is most than the completely neutral feelings I have about some random inn.