Snap and developer Mojiworks are rolling out the Ready Chef Go mobile messaging game globally after a successful test in its first month.

The companies said that the players of the Snapchat cooking game served half a billion in-game orders during the first month (it launched in a closed beta on December 19). That doesn’t tell us how many downloads there were, but it does show there was a lot of engagement in this multiplayer game. You can play the game in a Snapchat window, without any need to download the content.

In Ready Chef Go, friends can play together to out-cook other teams in quick rounds of up to 60 seconds, adding upgrades and boosts that come from ads to get ahead.

Mojiworks is the first third-party developer to launch a game featuring 3D Bitmojis.

The game has six restaurant modes that are available at different times of day, and their short development cycles provide for a lot of scope for seasonal modes and spontaneous in-game events. Mojiworks is working on new modes, progression elements, and friend-oriented perks. 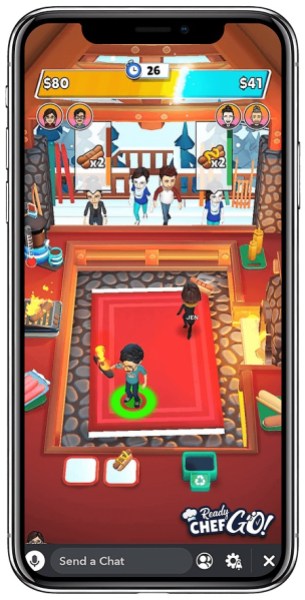 Ready Chef Go is the sixth third-party title to launch on Snap Games, a synchronous gaming platform built on the powerful PlayCanvas game engine. In Snapchat, you can open a Chat or Group Chat with friends, and tap the rocket icon to launch Snap Games. Snapchatters can chat with friends through voice and text-based features as they play.

Founded in 2016, Mojiworks is based in Guildford, England. The studio wants to make social games for the world’s most popular chat and social apps.

Mojiworks focuses on social-first game design, using HTML5 to develop native-quality games that are playable on any device with no install required.