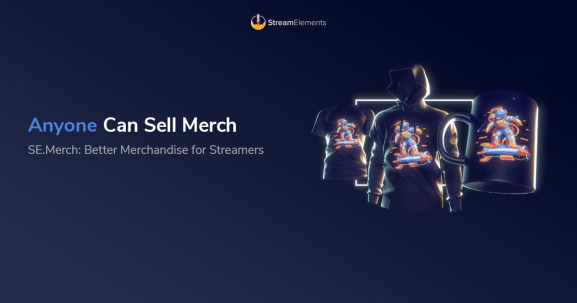 If you’re a content creator on sites like Twitch and YouTube, earning a living is a constant grind. Broadcast-tool company StreamElements wants to streamline that process. And its latest feature is its SE.Merch platform for helping creators to host and sell themed merchandise.

Merch is a great way for creators to generate revenue. Streamers often have a relatively small audience of dedicated fans. And products like T-shirts and coffee mugs provide a way for those viewers to spend even more money on a channel. It also makes that audience feel more connected to their favorite broadcasters.

But StreamElements claims that 85% of streamers don’t offer any merch. It says that many people view it as too much work for not enough return. And that’s despite multiple services offering similar merchandising platforms. But StreamElements thinks it can get many of those streamers on board with merch like it does with everything else: by making it simple and free.

“The pain points we were trying to solve for with SE.Merch was to make creating and selling merch quick and easy, while ensuring it was as lucrative as possible for the content creator community,” StreamElements chief executive officer Doron Nir said. “We also made it completely free to use to avoid the negative impact that comes with upselling streamers with gated features. Since this is one of our core products, we will be continuing to add more items and refining it based on community feedback.”

SE.Merch is another tool in StreamElements suite of features. And like the rest, it is completely free to use.

“Free” here means that it doesn’t cost anything for creators. You don’t have to pay a fee to unlock certain tiers of features. And it doesn’t have a subscription. StreamElements is more focused on making money from brand deals, and merchandise will help with that.

Of course, “free” doesn’t mean that creators get 100% cut of the merch sales. StreamElements is claiming, however, that it has the “highest per item profit margin in the market.” It also has production located in U.S. and Europe to ensure that products can ship quickly across those regions.

This should encourage even more broadcasters to begin selling apparel and bottle openers or whatever. And this should give your favorite speedrunner or PUBG streamer yet another way to keep making enough money to survive and thrive.