In December 2017, Facebook launched Messenger Kids, a child-friendly alternative to the main Messenger app that allows parents or guardians to review the people with whom a kid connects. It targets users aged 6 to 12 and complies with the Children’s Online Privacy and Protection Act (COPPA), and it debuted first on iOS before expanding to Android in February 2018.

Nearly two years after its arrival on Android, Messenger Kids is gaining new tools to better curate children’s experiences. Facebook announced a refresh this morning in every country where the service is available (including Canada, Peru, Mexico, the U.S.), along with an updated privacy policy governing the handling, management, and storage of Messenger Kids data.

“Facebook has done a good job of balancing features that both deliver the right information to keep parents in the loop about their child’s use of Messenger Kids, while also allowing children to have fun and learn digital literacy skills,” said ConnectSafely.org CEO and internet safety advocate Larry Magid in a prepared statement. “It’s important to give parents the power to manage their child’s experience, like seeing what images and videos their children are sending and receiving.”

As you’ll recall, Messenger Kids — which features augmented reality filters and lenses along with games and educational content — lets children register with their first and last name instead of phone numbers and hides their accounts from searches on Facebook. Moreover, it doesn’t automatically migrate accounts to full Facebook accounts once children turn 13 years old — the minimum age for Facebook registration. 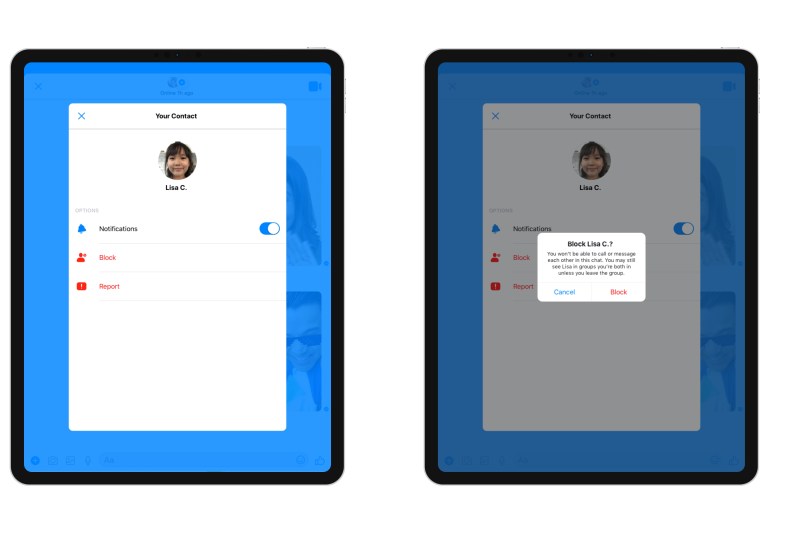 Above: The blocking and reporting tools in Messenger Kids.

None of that’s changing, but starting today, parents can see a child’s conversation partners and whether they’re video-chatting or texting and the conversation frequency over the past 30 days. Additionally, they’re able to view the most recent photos and videos the kid sent and received in their inbox and to remove inappropriate messages and report them to Facebook.

Parents can also now access lists of their child’s reporting and blocking actions and of the people they’ve blocked or unblocked, as well as messages or contacts they’ve reported and the reasons for actions. They’re able to see devices to which their kid is logged in and force a log-out remotely. And they can request a copy of their child’s contacts in addition to the messages, images, and videos they’ve exchanged, which will notify the child immediately.

As before, parents can customize the Messenger Kids experience through the Facebook apps for Android and iOS. The Parent Dashboard is accessible from the shortcut menu — those with multiple kids using the Messenger Kids app can select the name of the child whose account they’d like to manage.

In the spirit of transparency, Facebook will this week will roll out an in-app Messenger Kids activity that uses “kid-appropriate” language to educate children about the types of information people see about them. For instance, it’ll inform kids that people they know might see their name and photo; that parents can see and download their messaging content; that they’re not able to delete any messages they send or receive; and that Facebook saves information about how and when they use the Messenger Kids app. The public service announcements will arrive alongside the new privacy policy, which will include new information about Facebook’s data collection, use, sharing, retention, and deletion practices and practices with respect to the improvements made to Messenger Kids (like new controls and visibility in the Parent Dashboard). Plus, it’ll describe features the company expects to roll out in the future, such as Messenger Kids app usage limits and restrictions and the ability to solicit in-app feedback and answers to surveys.

Messenger Kids didn’t exactly have a warm reception when it first became publicly available. A 2018 Wired report found that the majority of experts who vetted Messenger Kids before its launch last year were given money by Facebook. And 100 kids’ health advocates — including U.K. Secretary of Health Jeremy Hunt — mounted a campaign to lobby Facebook to kill the service because they believe the app could undermine healthy child development. 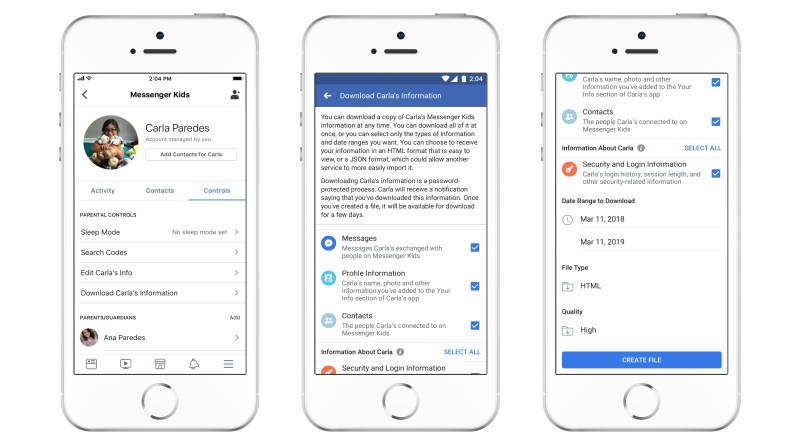 Facebook for its part said it spoke with “thousands” of parents, parenting organizations, and child safety advocates including the National PTA in developing Messenger Kids. Furthermore, the company notes that it only shares information under data confidentiality and security agreements with service providers for the purpose of operating Messenger Kids and that it doesn’t use children’s data from Messenger Kids for in-app advertising or purchases.

“With two out of three parents wishing they had more control over their kids’ online experiences, we’ve continued our dialogue with parents and experts aroundthe world to ensure we’re providing a messaging app that works for families,” wrote Brown. “We don’t sell any of your or your child’s information to anyone, and we never will.”