When was the last time you saw an authentic take on video games in mainstream media such as a television series? I can’t think of any that didn’t talk down to gamers. But Mythic Quest: Raven’s Banquet, which debuts today on the new Apple TV+ entertainment service, is a first in that respect.

It’s a live-action comedy series with nine half-hour episodes in its first season. I binged them all in a couple of days in a preview, and I also did some interviews with the show’s creators. I was impressed with the fact that they got the details of how a game studio works right, but they also came up with a beautiful and touching story that raised serious issues inherent in the creation of video games. Yes, it’s actually really good, and Apple has renewed it for a second season already.

The reason for that has something to do with its origins. Jason Altman, who worked for 15 years as a game producer, came up with the idea a few years ago in his role at Ubisoft Film & Television.

“You get to see all the personalities,” he said in an interview with GamesBeat. “It’s a real mix of technical and creative people who work together for years on the project. Games have become a part of mainstream culture. They are really present in people’s lives. But people don’t know a lot about the people who make them. Having seen it from the inside, I felt the environment and the personalities made it a really great environment for a workplace comedy.” 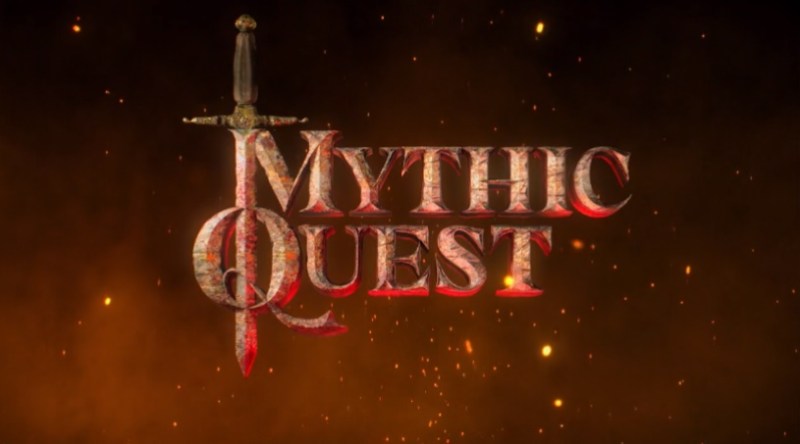 Above: Mythic Quest is a show about making a video game studio.

Altman worked on it with Danielle Kreinik and Gérard Guillemot. They were part of the giant French video game company Ubisoft, and they had already had some experience with films like Assassin’s Creed. They lobbied Rob McElhenney, the star of It’s Always Sunny in Philadelphia, and he turned them down at first.

In an interview with GamesBeat, McElhenney said, “Our experience in watching movies and TV shows in this space was that it felt very marginalized. The community itself felt very derided. It was never presented from a pop culture perspective in a positive or interesting light.”

But Ubisoft kept at it and invited McElhenney to Montreal to visit a studio and introduced him to people who made games. They also visited other non-Ubisoft game studios so the show creators could see all of the types of jobs, said Kreinik in an interview. She said that the writers then created a studio that was an amalgamation of everything.

“We realized early on we had something very interesting,” said McElhenney, who signed on as co-creator, executive producer, and the star character Ian Grimm. “We had an opportunity to present the industry and this particular gaming studio in a much more authentic light. That’s what we have been desperately trying to make sure we get right.” 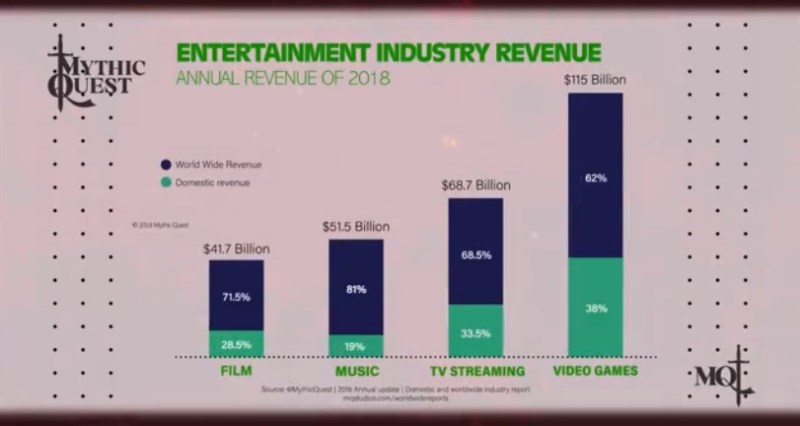 Above: This game industry slide is actually shown in Mythic Quest.

McElhenney signed on with producers Lionsgate/3 Arts Entertainment venture and Ubisoft. He and Megan Ganz, co-creator and executive producer, did some research and looked up gamer shows like Felicia Day’s The Guild. McElhenney said Day was immensely talented, but he said the vast majority of pop culture takes on gaming have just been awful.

Ganz said that the show also had broader appeal as a “workplace comedy.” And it puts its finger on a common dispute in game studios and other workplaces: the conflict between the creators and the suits, or the business executives. They hate each other, but they need each other to make a product.

“The important thing is that neither one is right,” Ganz said. “We all know that creatives hate the suits and we don’t need them. But somebody’s got to pay for the cameras and put up the lights. So you always have to make those compromises.”

Those conflicts are what I found most interesting about the show.

Mythic Quest: Raven’s Banquet is the name of the show as well as a popular video game expansion that has been in the works for two years at the fictional studio. Ian Grimm (McElhenney) has a big ego as the game’s creative director. His engineering chief is an Australian woman named Poppy Li (played by Charlotte Nicdao). David (executive producer David Hornsby) is the weak-minded studio executive producer. Rachel (Ashly Burch) is a game tester. C.W. Longbottom (F. Murray Abraham) is a pretentious writer. Brad (Danny Pudi) is the blood-sucking monetization guy who wants to put a casino in the fantasy role-playing game. Jo (Jessie Ennis) is the psychotic assistant to David. And Dana is a tester who becomes a livestreamer (Imani Hakim). Of the characters, I liked Poppy Li — a rare Asian Australian character — the best.

“The things that bring you in is the characters,” Ganz added. “You’re not following if the specific business is a success or failure. The game is a stand-in for anything that people make, that they are passionate about, and how that bleeds into your personal life and how many conflicts that can bring up in the workplace with big egos.”

Ganz said the writing team was key, with half of it non-gamers and half of it gamers. One of the key writers who bring that gaming knowledge is actress Burch, a well-known video game comedian who stars as Rachel in the show.

“When we went to PAX, everybody wanted to take pictures with Ashly and not me, which I was happy to see,” McElhenney said.

While it is a comedy, McElhenney said the writers don’t take the easy way out by making fun of gamers.

“It was really important to us for anybody in the community that was watching it to recognize that this is truly a celebration and a love letter to the industry itself,” McElhenney said. “But without pandering. If there’s an audience that can recognize that and does not appreciate being pandered to, it’s the gaming industry. We present it not just in all its positivity but some of the more negative and toxic elements too.”

The show takes on issues such as crunch time (forced overtime, often unpaid) and how that could lead to unionization. It depicts absent French overlords who oversee the studio from afar. It explores toxic gamers and their reaction to anyone who is a fake company shill. It explores diversity in a comic way when the studio doesn’t have any inspiring women to entertain a class of visiting girls. I was also stunned in the episode, “The Casino,” to hear a discussion about monetization and its limits in a free-to-play game that wasn’t totally dumbed down. Brad, the money guy, is stunned to learn that, within minutes of its launch, some guy spends his retirement money on a $250,000 rare item in the game.

Above: Ian Grimm and Poppy Li are two of Mythic Quest‘s stars.

“Brad, who is the monetization expert is typically derided within the gaming community as the guy who puts loot boxes in the game,” Ganz said. “But ultimately, somebody has to pay for these games. Whenever you see a sitcom where the characters would rather not be around each other but have to be around each other, that’s when you get the best comedy.”

McElhenney said he spoke to a number of real monetization experts who are in it just for the money, as well as the ones who try to work early in the design to infuse monetization into the game in an organic way.

“We want to make sure as a show that we’re not taking sides,” he said. “We are presenting versions of both the players who have to experience these loot boxes that everybody collectively hates and then the economic realities of making a game in a capitalist culture.”

The show gives a lot of nods to realism, with the developers caring a lot about how they are depicted in gamer publications such as Kotaku and Polygon. The developers have to kowtow to Pootie Shoe (remind you of Pewdie Pie?), a 13-year-old boy with 10 million followers who is a big fan of Mythic Quest. You’ll see lots of scenes from real video games (Assassin’s Creed, For Honor, and Kingdom Come Deliverance).

In one hilarious episode, Kotaku writes about how the game has become a haven for white supremacists. Tangles with hackers and big live events draw everyone back into the game. Reddit and Steam come up in passing. The posters on the walls and desk toys are also things that gamers will pick up on, Altman said.

“It goes well beyond Easter eggs,” McElhenney said. “We present some of the more negative and toxic elements too. We felt if we didn’t do that, it would feel false.”

The show offers a peek inside a game studio and all of its warts. I found the modern-day references made the show feel contemporary. 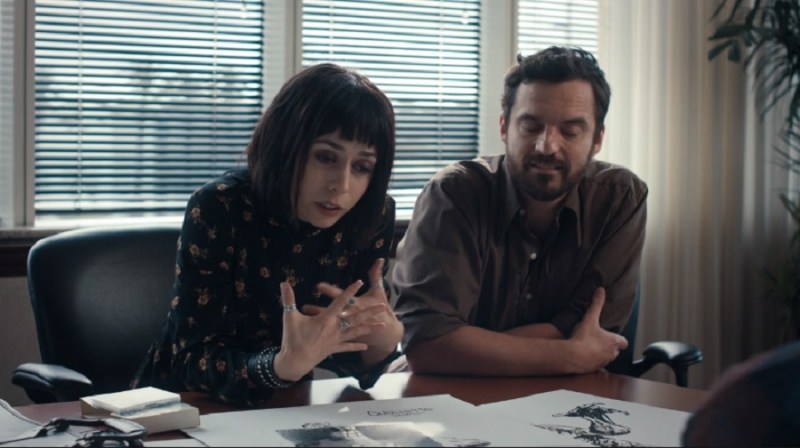 Above: The creators of Dark Quiet Death.

But the most interesting episode was the fifth one, dubbed “A Dark Quiet Death.” It took us back in time to the 1990s with other characters who start meet as strangers and set up shop in the same building as the Mythic Quest studio. The two people, Doc and Beans, (played by Jake Jonson and Cristin Milioti), are ghoulish characters with dark personalities. They start a game company, Oubliette Studios, and fall in love. They take their game from nothing to incredible success. Yet the slippery slope of the clash between creativity and commercial success eats at them.

This important episode set up a through line, as the in-show writer Longbottom would say, that extended as a theme of the show. A curse doomed the new company to repeat the life cycle of the previous company, as if the final episode of the show was fated to end a certain way. I wasn’t expecting that piece of clever writing in a sitcom, and it made the show so much stronger.

Ubisoft also remains committed to the show, and its studios are actually creating game content specifically so that it can be shown in the episodes to enhance the realism. An animated shovel plays a big role in the game, and Ubisoft had to create that. Ubisoft’s Red Storm studio worked on the show so “a real development team created a fake game that looks like a real game for the TV series,” Altman said.

In the process of creating this realism, Ubisoft and the show creators may have created one of the best recruiting tools for the game industry. I’m very much looking forward to the second season, as well as Ubisoft’s upcoming film Tom Clancy’s The Division, also based on a big Ubisoft gaming property.

Apple TV+ is available on the Apple TV app on iPhone, iPad, Apple TV, iPod touch, Mac, select Samsung smart TVs, Amazon Fire TV and Roku devices, as well as at tv.apple.com, for $5 per month with a seven-day free trial. The Apple TV app will be available on LG, Sony, and VIZIO smart TVs later this year. Altman said Apple turned out to be a good partner, with its own balance poised between technology and entertainment.