The esports industry is growing fast, and the number of jobs available grew by 87% in 2019, according to a survey by esports jobs website Hitmarker. It said that the number of available esports jobs rose from 5,896 in 2018 to 11,027 in 2019. This represented an 87.03% increase in global hiring activity.

The work is interesting to me as it captures the profile of a job market that didn’t exist a decade ago. And it helps give would-be esports stars and workers a more realistic picture of how to establish a career in esports. It’s not a perfect measure, as it’s easier to track advertised jobs than it is to report positions filled, but it’s a safe bet that many jobs are filled in such a fast-growing market.

Hitmaker managing director Rich Huggan said in a statement this is the first time the company has been able to compare sets of data from two full calendar years and the overall picture is hugely positive, with a significant increase in 2019 in paid opportunities. 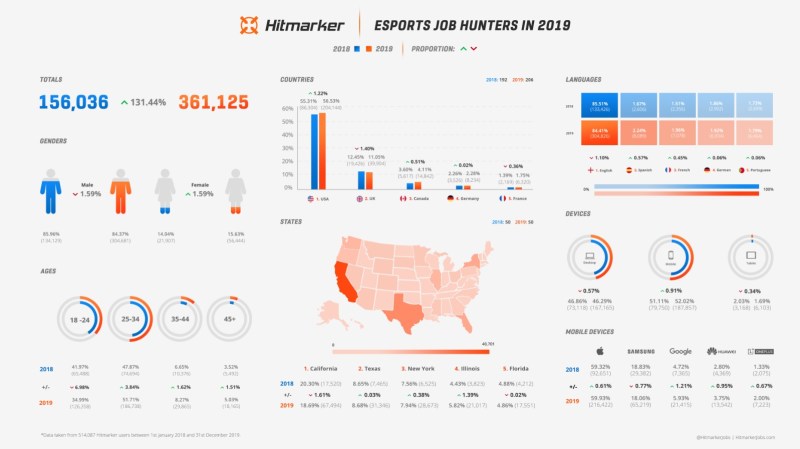 Twitch was by far the most active hiring company in esports. Twitch advertised 1,334 esports jobs in 2019, an enormous 12.10% of all publicly available opportunities. This was a huge proportional growth of 10.47% compared to the 96 esports roles it published in 2018 for 1.63% of the share. ​(It’s worth noting that a change to Twitch’s job descriptions early in the year was a huge factor here, though).

Women’s participation in the esports job hunt continued to increase last year. The esports hiring process was still dominated by males in 2019, though the proportion of women participating in the job hunt increased to 15.63% from 14.04% in 2018, an upturn of 1.59%. At this rate of change, it will take just under 22 years for women to achieve 50/50 parity with their male counterparts in the esports job search, however. 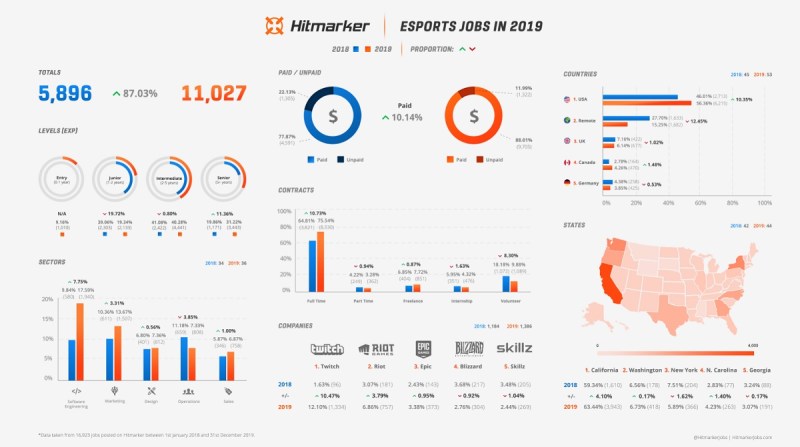 Above: Esports jobs available in 2019.

Full-time salaried contracts are the fastest-growing type available on Hitmarker and now account for over 75% of all listings on our website.

Software engineers are as in-demand in the esports industry as they are in seemingly all others, with an enormous uptick in companies looking for developers and engineers from 2018 to 2019. We’re seeing more and more of the jobs found in other tech-driven industries being posted to our platform as the overall market grows, which bodes well for the future.

There are some areas of concern, though. While good for the U.S. — and California in particular — it’s clear that its domination of the esports jobs market is only growing, with the U.K., Canada, and Germany lagging far behind in terms of jobs advertised. However, we feel it should be noted that greatly increased hiring activity and more esports focused job descriptions from Twitch — particularly in the San Francisco area — were largely behind the USA’s increase in 2019.

Hitmarker is tracking around 500,000 esports job seekers. Hitmarker had anticipated that female job hunters would make up closer to 20% than 15% of the proportion of the total by the end of last year, but unfortunately, this did not prove to be the case, the company said.