The amount of hours people spend watching video games on livestreaming sites continues to grow. In January, that number reached 1.34 billion over Twitch, YouTube Gaming, Facebook Gaming, and Mixer. That’s up 17% from 1.14 billion during January 2019, according to industry-tracking groups Arsenal and StreamElements.

This steady, significant growth explains why Microsoft, Amazon, Google, and Facebook are all fighting so hard to capture the market. Each company has made deals to bring exclusive content and creators to their platforms. That includes Google inking a deal with Activision to host the Overwatch League and Call of Duty League exclusively on YouTube Gaming. Nearly 1.5 billion viewership hours is a lot of time to put ads against and to gather data from, so expect these companies to keep fighting.

“When you look at the amount of hours watched in January compared to a year ago and see the 17% rise, it’s clear that livestreaming is maintaining its trajectory toward being a powerful arm of the games industry,” StreamElements chief executive Doron Nir said. “And while some platforms are growing faster than others, the increasing size of the pie ensures there are enough slices to go around.”

Livestreaming services battle to claim more of the growing market

In January, all of the livestreaming platforms grew year-over-year in January. Mixer, however, is growing slowly. Facebook Gaming, meanwhile, is up 340%. Twitch still holds a significant lead, however, as it grew from 802 million hours watched to 842 million hours. 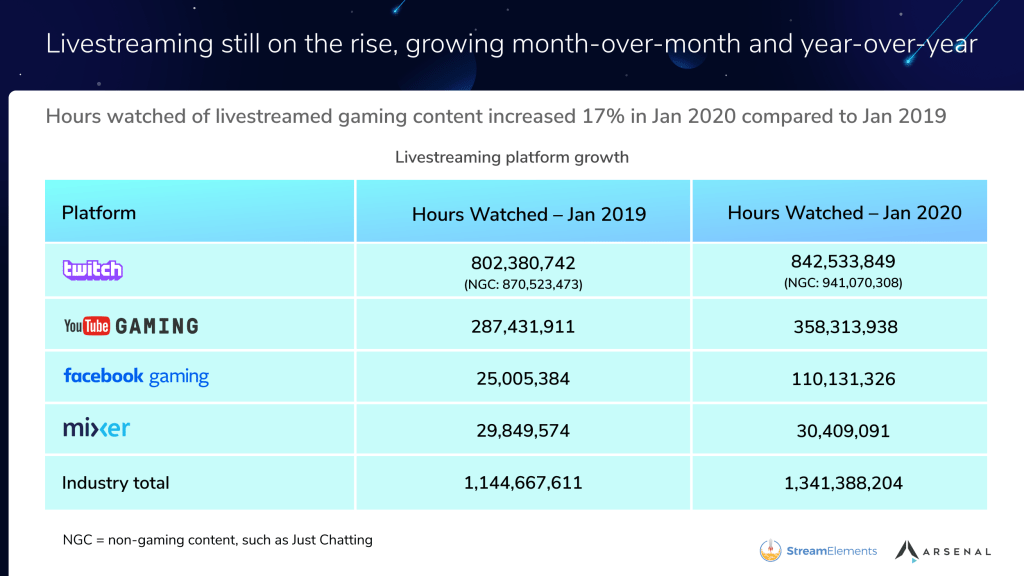 Above: Each platform saw more viewer hours in January 2020 than January 2019.

But even as everyone in this market is up year-over-year, the competition is getting hot. As more people spend more time watching live gaming content, the platform services are making moves to win them over. Nir notes that this is a lot like what is happening with more traditional streaming content.

“This mirrors what we are seeing with streaming-media companies like Netflix, HBO, Prime Video, HULU, and Disney+, where it’s now about who has the best content,” said Nir. “And from a creator’s perspective, it’s going to be about revenue, community, and the best tools to engage fans and monetize their channels.”

Correction: This story originally noted that the industry was approaching 500 million hours watched. That was due to an error in data from StreamElements and Arsenal. We’ve updated this story to reflect the correct number, which is 1.34 billion.