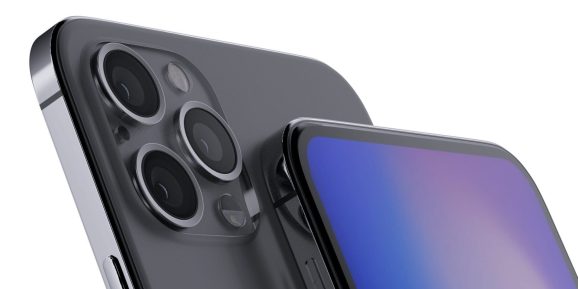 A conceptual rendering of the iPhone 12 Pro by Ben Geskin and Aziz Ghaus.

If you believe most of the evidence out there, Apple’s iPhone designs are typically finished well in advance of their release, enabling the company to focus its final months on manufacturing the massive quantities users around the world will demand on Day One. Due to problems with Intel’s 5G modem and an eleventh hour settlement between Apple and Qualcomm, this year’s iPhones were expected to deviate from the norm, as the company reportedly put all hands on deck to redesign and launch its flagship device for release this year.

According to a report today from Fast Company, which twice broke the news that Intel’s 5G modems were missing key Apple milestone deadlines, Apple is allegedly designing its own antenna for 5G iPhones — a process, the publication correctly suggests, that would be fraught with huge risks. Everyone still remembers Antennagate, when the iPhone 4 became incapable of receiving cellular signals if held in certain ways, as well as Apple’s infamous “you’re holding it wrong” defense, firing of a key responsible executive, and subsequent redesign of the iPhone 4S’ antenna system. (Even so, apologists prefer not to acknowledge that the undeniably beautiful iPhone 4 had a real issue.)

It’s well established that 5G millimeter wave antennas can suffer from an even more pronounced version of the same problem. That’s the reason Qualcomm generally recommends the strategic mounting of multiple antennas at a phone’s edges, guaranteeing that at least one will be exposed during normal use. As of today, the smallest antenna module Qualcomm sells is the QTM525, which promises to work in devices in the 8mm thickness range — a point that was on display with Samsung’s announcement of the 7.8mm thick Galaxy S20+, which is just barely large enough to use that antenna. Samsung conspicuously left millimeter wave out of the slightly smaller Galaxy S20, possibly awaiting a smaller antenna.

The report suggests Apple is back on an iPhone thinness kick, so the QTM525 is too big. Meanwhile, the number of consumers who think iPhones are too thick is somewhere in the neighborhood of zero people outside of Cupertino, and many users have spent years opining that battery life and performance matter more than further shrinking the smartphone. Apple has even listened to them, occasionally.

While I wouldn’t put it past Apple to source certain 5G parts from someone other than Qualcomm, and there’s evidence that it’s doing so with rival Broadcom, I’m skeptical that it’s actually in a position right now to make its own antennas for 5G iPhones — or that it’s still wrestling at this very late stage with substantially different design alternatives. That would leave the company with half a year to finalize and manufacture all the hardware it needs for what’s been predicted to be a supercycle iPhone launch, feeding pent-up global demand for substantial cosmetic and internal hardware redesigns.

Half a year isn’t nothing, but it would be cutting things close: If manufacturing started late, that might be enough to restrict initial supplies of the affected iPhones and possibly create the sort of regional and model-specific availability challenges we haven’t seen in some time. And that’s assuming there’s no last-minute or post-launch snafu with antenna performance. As today’s report points out, all it would take is some undiscovered glitch in design or manufacturing to mess up 5G performance, seriously undercutting the iPhone’s speed and parity compared with Android rivals.

Given what a mess things could become, the easier and arguably better solution is to use more of Qualcomm’s 5G stack — its Snapdragon X55 modem, along with the QTM525 antenna — to guarantee there aren’t any hiccups in iPhone 5G cellular performance this year. The system is tested, works, and delivers great performance. Apple’s reliance on dual vendor solutions didn’t do it many favors during the Qualcomm/Intel modem battles in the past, and actually held iPhones back from transferring cellular data at peak speeds. As Apple moves toward creating its own 5G modems for future iPhones, it would be well advised to start on a solid foundation of 5G performance rather than unnecessarily risking another debacle.

My hope is that we’ll get some sense Apple has fully locked down the 2020 iPhones soon. If not, this year is going to be a wild and unpredictable ride for both the company and consumers. That could be exciting to watch but somewhat concerning up until the very end, when the devices get into users’ hands for real-world testing and show whether Apple’s late 5G adoption was really worth waiting for.