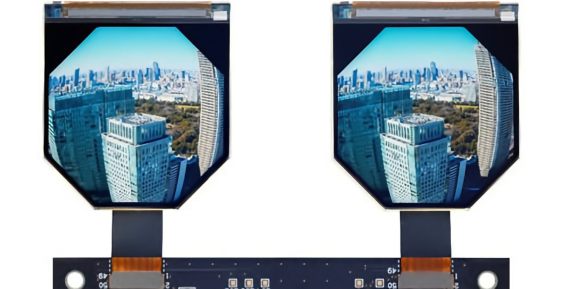 Two of this year’s most important evolutions of VR glasses involve increasing their display resolution and reducing their size — changes that Japan Display (JDI) is making possible. The company backed by Sony, Hitachi, and Toshiba announced today that it’s now mass-producing a pair of high-pixel-density screens designed for smaller, lighter VR glasses, including at least one unnamed model.

Even so, the new displays have a lot to offer. They deliver a 120Hz response rate, and typical brightness of 430cd/m2, while coming in corner-cut shapes that can reduce the components’ footprints inside VR glasses. JDI says that they use a “special optical design” that will make wearables thinner and lighter, helping hardware makers to move past today’s big ski goggle-sized headsets. This could be particularly important for VR glasses people carry outside of their homes, such as when they’re traveling.

Moving towards actual “retina display” resolution becomes trickier for screens placed directly next to eyes, as the grid-like seams between pixels become obvious in what’s known as the “screen door effect.” While Samsung debuted an anti-screen door effect technique for its lower-resolution 616ppi displays, rival LG created a 1,443ppi display in a larger (4.3-inch) form factor. One of the key tradeoffs for JDI-style smaller form factors may be narrower fields of view, though improved lenses might offset that issue.

The company says that the new display has “already been introduced to the market” in “VR glasses,” though it doesn’t name the glasses, and the commencement of mass production now suggests that they’re likely to have been unveiled at a trade show such as CES rather than actually released. Panasonic’s prototype VR classes use smaller, higher-resolution displays (with lower refresh rates and more obvious motion blur), so they’re not the likely candidate; an obscure prototype from Pico might be the first beneficiary. Regardless of who’s first to commercialize these displays, the general trend toward more comfortable VR will be welcome, as long as immersion or other display performance factors aren’t sacrificed in the process.