2019 is turning out to have been one heckuva year for Path of Exile. Grinding Gear Games announced Path of Exile 2 and Path of Exile Mobile in December, and it turns out players were already excited about the online action-role-playing game before any of these details.

Path of Exile saw one of the greatest increases of play time on its Western servers in its five-year history. Grinding Gear Games general manager Chris Wilson (no relation to the writer — Ed.) shared the details while giving a presentation about the Delirium expansion in the 3.10 update coming March 13 (and one week later for PlayStation 4 and Xbox One). This spike in growth from 2018 to 2019 is roughly the same, numbers-wise, as what Grinding Gear saw between 2016 and 2017, though that one had a larger percentage of growth because the player base was smaller then.

This comes off another nice growth spurt after the Betrayal expansion, which launched in late 2018.

“I’m pleased to see both growth and the fact that the number of players that we added between 2018 and ’19 in terms of play hours was basically the same as the amount of people playing in 2015,” Wilson said Monday over a video call. “That’s quite a lot of growth, and hopefully, we can keep it up for as long as we can do so.” 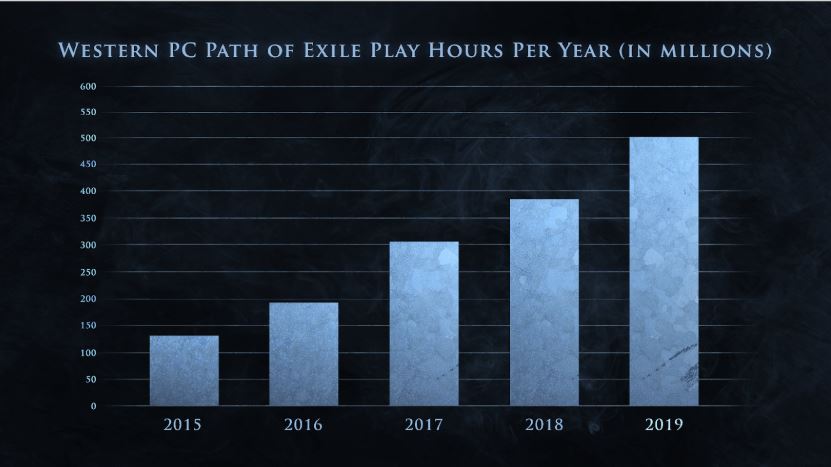 Above: Player hours were on the rise again in 2019.

This doesn’t include increases in China and Taiwan, Wilson said, because Grinding Gear Games would need permission from its partners in the regions to reveal those numbers. The studio no longer reports specific player numbers, opting to instead track player hours or concurrent players (as it did when noting that Betrayal had nearly 200,000 concurrent players at one point).

Path of Exile launched in 2013 for PC, and it has steadily expanded both regions and platforms since. It came to Xbox One in 2017 and PlayStation 4 in 2019. And it hit China in 2017, bringing the game to a key region that enjoys PC free-to-play games and action-RPGs.

Needs of the many

Path of Exile continues to release expansions and tech updates several times a year, along with new cosmetics (Grinding Gear’s main approach to monetization is by selling cosmetics, along with more server options, character slots, and other things that don’t affect moment-to-moment gameplay). Many of the updates address player requests. For Delirium, Grinding Gear is working on improvements to skills and wands, for example. But this also comes from learning how to update a free-to-play online action-RPG over the years — after all, it’s not like there’s a roadmap. Path of Exile was one of the first such games to launch.

I asked if the successful growth is because Grinding Gear has gotten better at making expansions, or if it’s because the company has learned lessons from producing endgame gameplay for several years.

“There is a recipe to Path of Exile content that includes something for everyone. We’ve got several player demographics, and we’re going to hit each one with content that they’ll enjoy,” Wilson said. “It took us a while to work out that mixture.”

Those early expansions focused completely on additions to story, character customization, or the early game, with “not enough emphasis on hitting something for all players,” Wilson said. “And while that really satisfied that group of players, it didn’t really cause actual growth in player numbers because other people felt underserved.”

Another reason for the growth, Wilson said, is part of a larger trend with action-RPGs — story.

“So as you’ve seen with recent RPG releases, action-RPGs with a large single-player campaign that you can play through just get a lot of attention. Everyone loves playing through new storyline content in these games, so if you can dump a bunch of acts on someone, you get a lot of extra playtime,” Wilson said.

Another way Grinding Gear hopes to keep players — and increase those player hours — is by enabling folks to bring their characters and microtransactions from Path of Exile to Path of Exile 2. You’ll be able to play from the same client, and some of the improvements from the sequel will find their way into the original.

Path of Exile 2 will have a seven-act storyline, 19 new ascendancy classes, a slew of new monsters and items, character models, animations, and more.

“We wanted to add a true sequel that’s sitting aside Path of Exile 1,” Wilson said. “There’s no segregated community. There’s a shared endgame, so regardless of which storyline you prefer — there will be some diehard people who put their foot down and say, ‘No, I like the original better’ — those people will still get to play and meet up in the endgame with their friends who are playing the new content. It also means that many of the improvements to Path of Exile 2, like new rigs for the characters and new effects, can affect Path of Exile 1 because they’re still in the same game. So it’s not like abandoning the old one and working on the new one; it’s an effort to maintain the old one beside the new one.”

As an example of how different Grinding Gear’s model is, character and cosmetics don’t carry over from The Division to The Division II.