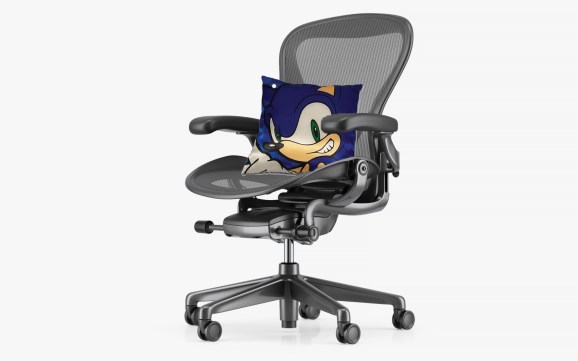 Logitech G and Herman Miller's gaming furniture is probably not just an Aeron chair with a Sonic pillow on it.

Gaming-accessory manufacturer Logitech and design company Herman Miller have successfully performed the dark ritual. Together, the companies ventured into the unknown, squeezed blood from a mechanical keyboard, and returned unharmed. Only, something came with them. Something unnatural. And this morning, that something opened its maw and sang this dreaded incantation: “high-performance furniture solutions for gamers.”

That’s right — Herman Miller is teaming up with Logitech G to design gamer chairs. Logitech G is known for its excellent gaming devices. Herman Miller, meanwhile, makes some of the most popular office chairs in the world. The companies are combining their experience for a lineup of products. The Logitech G and Herman Miller gaming furniture will begin rolling out this spring.

“At Herman Miller, we have a rich history of designing solutions to support people wherever they live and work,” Herman Miller chief marketing officer Tim Straker said. “We’re excited to combine our ergonomic, research-driven approach with Logitech G’s excellence in technology and innovation.Together, we’ll develop high-quality solutions that provide gamers and esports athletes with the utmost support and comfort.”

Logitech G has proven it knows how to build devices for gamers, and it wants to unlock that knowledge for Herman Miller’s gaming-furniture designers.

“Logitech G is committed to creating the best gear for gamers,” Logitech G chief marketing officer Peter Kingsley said. “We make that possible through a unique collaboration process between our design and engineering teams, partners, and our customers to translate needs and capabilities into products that gamers love. Herman Miller was the obvious choice for us to partner with given their more than 100 years of expertise. Together we will deliver amazing products with advanced ergonomics, comfort, and performance that gamers deserve.”

Gaming chairs are not new. If you’ve watched creators on Twitch or YouTube, you’ve likely seen a few. Most go for the sporty look of companies like DXRacer, which some might say look like “crocs for your ass.”

But these products have a market because gamers spend a lot of money on their hobby. “Gaming RAM” and “gaming mice” exist because people are willing to pay a premium. And this sort of marketing segmentation is both silly and useful. Putting “gaming” in front of everything is definitely a marketing trick, but it also often leads to better products.

Gaming fans are demanding and specific about what they want. And because they spend more, companies are more willing to build products that live up to those desires.

Herman Miller already sells chairs for hundreds of dollars each. And it can open that business up to an entirely new audience if it’s willing to provide something that actually makes sense for gamers.

With Logitech’s help, Herman Miller could do exactly that.