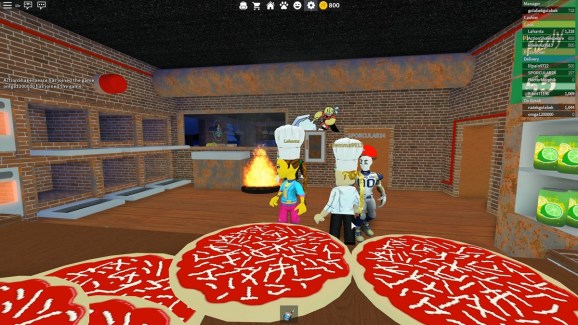 Work at a Pizza Place has been played 1.9 billion times on Roblox.

Online gaming platform Roblox has raised $150 million in funding in a round led by Andreessen Horowitz’s late stage venture fund.

It seems the folks at Andreessen Horowitz have been playing a lot of user-generated games on Roblox, like Work at a Pizza Place or Meep City, each of which have gotten billions of plays on the platform.

In the funding round, Roblox is also offering employees and stakeholders an opportunity to participate in a secondary round. Roblox said it comes at a time of significant growth for Roblox as it hits new milestones including reaching over 115 million monthly active users and more than 1.5 billion hours of monthly engagement.

Roblox will use the funding to further grow its engineering team, and support creators around the world with the technology and infrastructure to build more immersive, collaborative experiences.

Additionally, Roblox said it is holding its seventh annual Bloxy awards on March 21 but this year the award show is going to be streamed in a brand new way — live within the platform. Roblox is available on a variety of platforms, including the PC, Mac, consoles, virtual reality platforms like Oculus and HTC, and mobile devices.

It’s not clear why Roblox needs to raise the money, as it should be making a lot of money on all those users. But it is a very ambitious company, competing with rivals such as Microsoft’s Minecraft. Roblox has now raised more than $185 million.