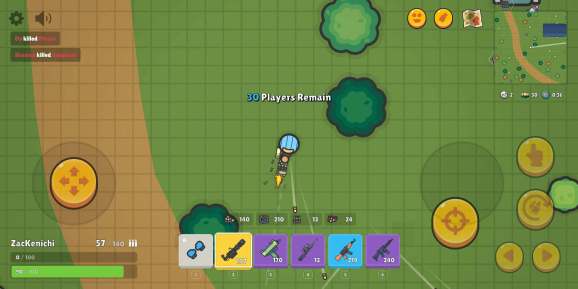 ZombsRoyale.io developer End Game Interactive has raised $3 million in a round of seed funding. The studio plans to use that influx of cash to build games similar to ZombsRoyale, which it made in a matter of weeks with a tiny staff.

ZombsRoyale, like other .io games, is a real-time multiplayer shooter that runs in browsers across numerous platforms. It is a simplified take on the battle royale genre with a top-down, animated look. End Game’s releases have racked up more than 160 million unique players since 2017

“We are so fortunate to have already reached so many players around the world through our games,” End Game chief executive Yang C. Liu said. “It has been an incredibly fulfilling journey watching our amazing community grow and we look forward to taking it to the next level with the launch of End Game and our future titles.”

With this support, End Game Interactive says it will try to keep up with fast-changing tastes.

“Gamer preferences and trends are a moving target in this dynamic industry, but Yang, Luke and their team have an intuitive sense of the space,” Makers Fund founding partner Jay Chi said. “They are a scrappy team that constantly comes up with new ideas, which will serve them well in a market traditionally dominated by larger incumbents.”