It seems crazy, as I found out during a demo, but it took a lot of thinking to bring this game about. The $30 game from Ninja Theory, the maker of Hellblade: Senua’s Sacrifice, debuts on March 24 on Xbox One, PC, and Xbox Game Pass.

I played the game for a few hours at a preview event in San Francisco and then sat down with Rahni Tucker, creative director, and Gerald Poon, senior game designer. Tucker was a senior designer on the 2013 game DmC: Devil May Cry, and you can see the influence of that fast-action game in Bleeding Edge. But while the game is surprisingly short on story compared to Hellblade, it is really deep when it comes to the action that could keep you playing the five-to-ten-minute matches for hours at a time. 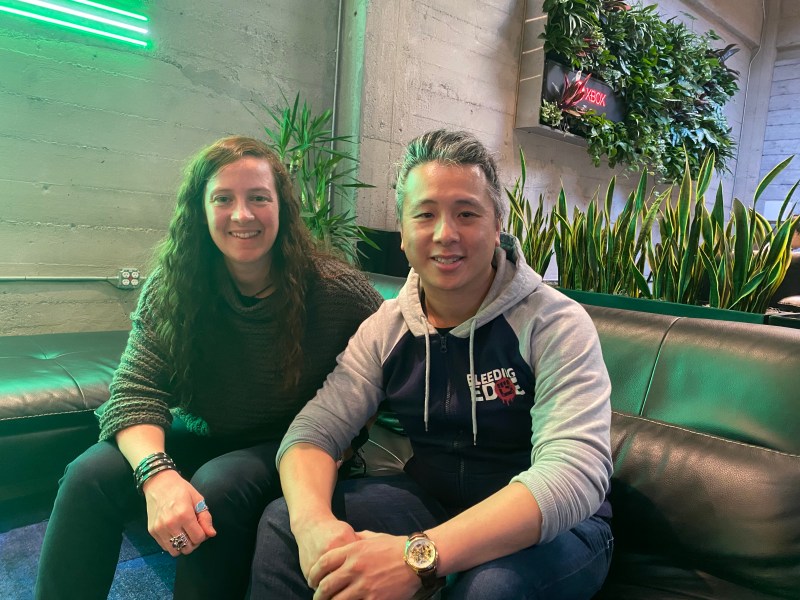 GamesBeat: Did you both come from Devil May Cry?

Rahni Tucker: No, just me.

Gerald Poon: I worked with Rahni in Australia about 15 years ago at THQ, back in the day. I’ve been at Ninja Theory for about six-and-a-half years. I joined right at the end of DmC. I’ve been working on this game since the start, pretty much.

GamesBeat: Has the game changed quite a bit during the beta? Can you describe some of that? I played it last at E3, so it’s been a while.

Poon: It’s changed a bit since the beta, but I’d say it’s changed the most since the technical alpha. We started the technical alpha just after E3. That went for several months. We got a lot of good feedback from that. One of the main things people wanted was more onboarding. Some people found the game difficult to get into, understanding the game modes and which characters to use. That was a common thread that came up. It was a lot of fun after you played five or six games, but those first couple of games were quite difficult.

We spent a lot of time completely redoing the tutorial. The original tutorial was just teaching you the buttons, what to press and what they do. The new tutorial still does that, but we also talk about the importance of teamwork. We talk about the importance of having a healer on the team, how important it is to have a balanced team. In the character select screen we have tool tips about which characters are easier or harder to play, to steer you toward the easier characters in your first couple of games. If you don’t have a support or a tank, that comes up as well. We added Ai to the dojo, which is something that came up a lot. That’s the main thing we concentrated on. 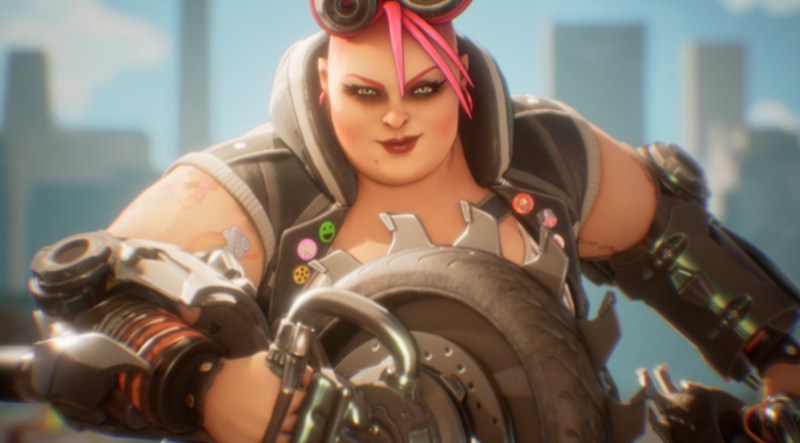 Above: Buttercup is a tank and one of a dozen or so characters in Bleeding Edge.

GamesBeat: If someone picks first, then you start highlighting suggestions?

Tucker: Right. The game says, “There’s no support on your team” until someone picks a support. It lets you know that it’s important to have that. You can still forward. If you want to go four tanks and no support, that’s fine.

Tucker: There’s also a suggestion badge under the characters we think are easier to play. For example, when you first open the hero select, there’s a suggestion on some of the healers, some of the damage, some of the tanks. But if there’s already a tank picked on your team, the suggestion from that category will disappear. It’s leading you toward the roles that haven’t been filled yet.

GamesBeat: What I picked up was to follow the directions of the person who knows what they’re doing.

Tucker: That’s usually what you do in these types of games.

GamesBeat: And then go for the weakest character near you and try to take them out. Where I had difficulty was I didn’t know what the other characters could do to me yet.

Tucker: One of the other things we added was the watch zone. We added that during the technical alpha. One reason we put that in is so that you have a learning resource within the game. You don’t have to leave the game to watch what other people do and learn how to play other characters and understand what they’re doing. In between games, while you’re matchmaking maybe, you can go in the watch zone and spectate other players’ games. There are also some video tutorials in there for different characters. If you got nailed by Buttercup last game, you can watch her video and see what she’s about, what abilities she has. You’ll be a bit more prepared.

You can spectate other matches as well, or watch your own matches back again. If you want to see what exactly happened that time when you died and you didn’t know what hit you, you can watch the whole thing again, step through it, pause, and fly the camera around.

Poon: During the technical alpha, some people felt the game was a bit hard to learn, because you basically have to go through the trial by fire. You play a game, you don’t know what’s going on, and then you have to play another game. That’s all you could do. That’s why we added AI to the dojo. It’s a safe environment to practice the characters while the AI fights you and see how everyone plays. 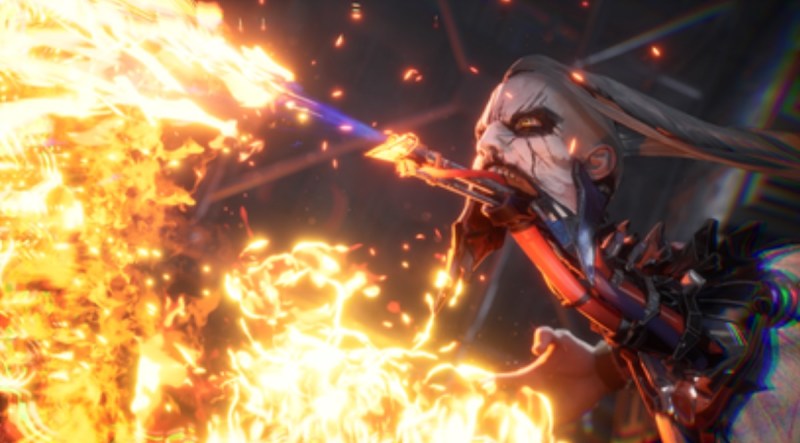 GamesBeat: When you have two characters charging at each other at once, is it really just a matter of who hits the X button first?

Tucker: There’s a few factors. It depends on the character and how fast their attack is. Daemon would have a natural advantage over Nidhoggr, for example. If you press the button at the same time, Daemon will win that, because he’s a faster attacking character. Special abilities have a super armor on them. If you’re casting a special ability, you’ll still take damage from a basic attack, but it won’t hit stun you and stop you casting your special. If you see someone coming at you and you don’t want to take the 50-50 on who gets the first hit in, you might decide to lead with a special instead, where you know you have your super armor and you’ll be covered. Then you can go into a combo once you have a hit advantage.

GamesBeat: When there’s a big melee, how do you try to sort out what’s best to do? That’s the fun of it, this big mass of bodies here with lots of things exploding, but how do you keep your head during those situations?

Tucker: As a player, I think the most important thing is, don’t panic.

Poon: It depends on the situation. If I’m playing Daemon, and I’m right in the thick of things, and I’m trying to get to the healer to take him out, you have to make a call. Do I have enough health to stay in the fight and chase him, or is it better to back off and run toward my own healer? After you play a few games you get a sense of what you should be doing at certain points. Being able to react quickly in that chaos is what makes some players better than others.

GamesBeat: Do you surf much during combat, on the hoverboards?

Poon: No, generally when you’re fighting you’re not on the board.

GamesBeat: Is the evade a good way to chase someone, then?

Tucker: It can be, but you have to be careful. If you burn all your evades chasing someone, then if they turn around and attack you, you have no defense left. It can be a bit risky to do that. But it’s totally an option.

Poon: A lot of characters have special abilities that give them movement. El Bastardo, the one with the dual broadswords, he has an ability that lets him leap forward quickly. If you want to chase someone and you don’t have evades, you can use that to gain some distance on your target.

GamesBeat: You have to remember to target an enemy first. Does it ever make sense to retarget someone? I was tending to chase someone around the whole time during a melee, but maybe I should have tried to switch.

Tucker: Again, it depends on the situation. It can usually be good to target someone and try to focus them down and finish them off, but if they end up getting out of reach and the rest of your team’s focusing on someone else, you might want to switch up.

Poon: You might be targeting someone, and then suddenly there’s another character on low health that an ally is attacking just coming up on your screen. You might switch to that target. Or maybe you’re targeting one character, but you can see an enemy casting a massive death ball. Maybe you should switch to him and try to stop him doing that if you can get there in time.