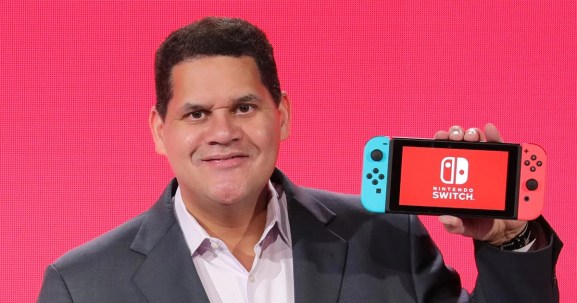 Nintendo of America’s former president and taker of names is joining GameStop’s board of directors. The huge gaming retail company announced today that Reggie Fils-Aimé is joining its board to help turn the company around. Fils-Aimé is best known as his time as president of Nintendo of America, when he was the face of the company in North America.

Joining Fils-Aimé on the board is Bill Simon and J.K. Symancyk. Simon has worked 30 years in various executive roles in the retail industry. Symancyk is the president and chief executive of PetSmart. GameStop’s goal is to have Fils-Aimé, Simon, and Symancyk provide expertise to help turn its struggling business back toward profitability.

“The gaming industry needs a healthy and vibrant GameStop,” Fils-Aimé writes on Twitter. “I look forward to being a part of GameStop’s corporate board and helping to make this happen.”

GameStop sees this as a chance to bring in fresh ideas.

“The board refreshment and governance enhancements announced today represent an important milestone in GameStop’s transformation as we continue to evolve the company’s business strategy for long-term success,” GameStop chief executive George Sherman said. “They are each highly qualified and bring significant, relevant experience to our turnaround.”

GameStop also told investors that four board members are leaving their duties on that body. Those include Dan DeMatteo, Gerald Szczepanski, Larry Zilavy, and Steve Koonin.

“During their tenure, the company has made important progress executing on our objective of becoming a leading omni-channel retailer with top market share in the gaming category,” Gamestop director Kathy Vrabeck. “And we appreciate their thoughtful leadership, guidance and service.”

Vrabeck said that the current team is working to implement a strategy to return value to shareholders. And the revised board of directors will have to ensure that remains true.

Reggie is one of the most recognizable executives among gaming fans in the West. He first joined Nintendo in the early 2000s, and he quickly took on the role of primary spokesperson.

In February 2019, Fils-Aimé announced that he would leave Nintendo at the end of that fiscal year. On April 15, he celebrated the end of his tenure at the company.

Since then, Fils-Aimé has moved into the role of industry luminary. He commands a lucrative speaking fee for his appearances at various events. But he’s also spending time in education. He regularly gives lectures at Cornell University as part of its Department of Communication.

Now, Fils-Aimé will also split some of his time helping to guide GameStop’s CEO in setting a direction and vision for that company.

GameStop is struggling as more people turn to digital purchases or free-to-play live-service games. This has fewer customers returning to GameStop to browse its selection of new and used games. This has put the company in a crisis.

GameStop’s stock traded as high as $56 at the start of the current generation of consoles. It closed at $3.70 on the New York Stock Exchange today.