The company said its layered products DexGuard for Android and iXGuard for iOS will provide protection for mobile games built on Unity, which is the most popular platform for mobile games. The Leuven, Belgium-based Guardsquare has more than 600 global customers such as retail banks for its security software.

Over half of new mobile games are built on Unity and more than 60 percent of VR/AR content also uses the platform. Both iXGuard and DexGuard can now be easily integrated into the typical Unity mobile game development process, providing code-hardening, runtime application self-protection (RASP), and other security features without adding technical complexity or impacting performance.

Like all unprotected mobile apps, mobile games are a target for hackers in several ways. From malicious actors to players who want to bypass rules, hackers target mobile games for piracy or cheating. Some hackers will take advantage of unprotected code to bypass licenses and in-app purchase checks. They may also build tweaks or distribute modified apps, giving unpaid access to others. Hacks such as these can result in lost revenue for studios.

Just ask Sander Bogaert, vice president of engineering at Guardsquare and once upon a time a hacker who caused a lot of mischief with Blizzard’s Diablo game. In an interview with VentureBeat, he said he was a hacker in high school, and then he eventually came around from the “dark side” to the “light side,” helping companies protect themselves against hackers like his younger self.

“I’ve always been interested in reverse engineering and hacking,” said Bogaert, who taught himself security technology. “I didn’t have a lot of time. So I tried to make things more efficient.”

He created programs that allowed his characters to level up automatically while he was attending high school. Then he sold the characters for a profit. That’s just the sort of thing that his customers would now like to prevent.

In games, reputation is on the line. Some players will cheat at games with techniques such as using aimbots, passing on fake GPS locations, modifying game parameters, spoofing time stamps, and more. Fairness is paramount in games, and players expect to compete on a level playing field. Allowing certain users to get ahead unfairly can damage the reputation of both a studio and a game.

“We have a lot of expertise built up, with industries such as banking,” said Bogaert. “We saw that mobile gaming is taking up a lot of time on mobile platforms.”

With today’s new Unity-specific updates, Guardsquare’s products now extend advanced security protection to mobile games to prevent hackers from understanding the inner workings of apps and ensuring the game cannot be modified during runtime or while it’s at rest.

“Guardsquare makes it incredibly easy to integrate layered security protections into our mobile applications. It has freed up our game developers to focus on what they do best — building games — while providing the entire organization with peace of mind that malicious actors cannot copy our games illegally or otherwise steal revenue from our hard-working team,” said Agnes Wong, BFB Operation Team member at Cybird. That company is a Guardsquare customer using its tech for mobile games, in a statement. 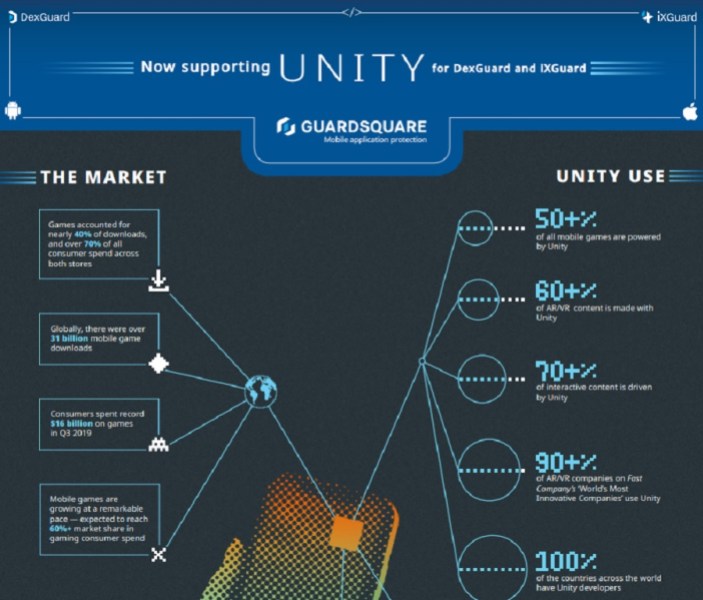 “We are in an interesting position as a company at Guardsquare, where our founding roots are in a technology called ProGuard, which is an open source technology for the Android ecosystem to optimize and improve the performance of Android apps,” said John Vigeant, chief revenue officer at Guardsquare, said in an interview. “What we’ve done is extended that into our commercial security products that prevent against reverse engineering and runtime attacks. We have a rich heritage in mobile apps.”

Guardsquare features that are now available for Unity include:

With Guardsquare’s advanced protections in place, mobile game developers can protect their reputations, eliminate the risk of lost revenue, and ensure gamers have a fair and fun playing experience. Guardsquare has about 80 people.