Having experienced Ironlights and Eleven Table Tennis over a shared Wi-Fi connection between two Quests with almost no latency, there’s something very special about being in the same room as a friend or family member for multiplayer.

But why should we have to connect to a Wi-Fi network at all? Ironlights and Eleven should direct connect to one another wherever you are — even away from a Wi-Fi router — to enjoy a duel or a game of table tennis. There’s a list of games that could benefit from this sort of two-player support, like Arizona Sunshine, Eleven, Ironlights, Sports Scramble, and Elven Assassin, but what’s more important is the future games and software which might be designed around this kind of same-location multiplayer support.

There’s also a class of games we’re calling “Arena-scale” — games like Space Pirate Arena — that need the location of two Quests synced up to work and Facebook’s being cautious about what it allows with its standalone headset in settings like this. It is understandable, because putting on a VR headset in 2020 means blindfolding yourself to the real world and establishing a “safe” space where objects shouldn’t move and other people shouldn’t enter. That’s because of the nature of the current tracking technology. We’ve seen toddlers, for instance, narrowly escape the violent swing of a parent playing Beat Saber because the little one didn’t understand their parent couldn’t see them. Headsets should see those kinds of things coming and warn the person in VR about it.

Broadly speaking, then, recognizing more details about your environment — like the location of your couch or chairs, the presence of people outside VR or even the location of other VR headsets — could be used to make your time in an Oculus Quest a generally safer and more enjoyable experience. And we’d like to see the games that could be developed with those kinds of upgrades to Quest’s tracking, guardian settings, and multiplayer support.

Likelihood: We don’t know how far Facebook will take its Guardian system on Quest but we do expect upgrades to it over time. 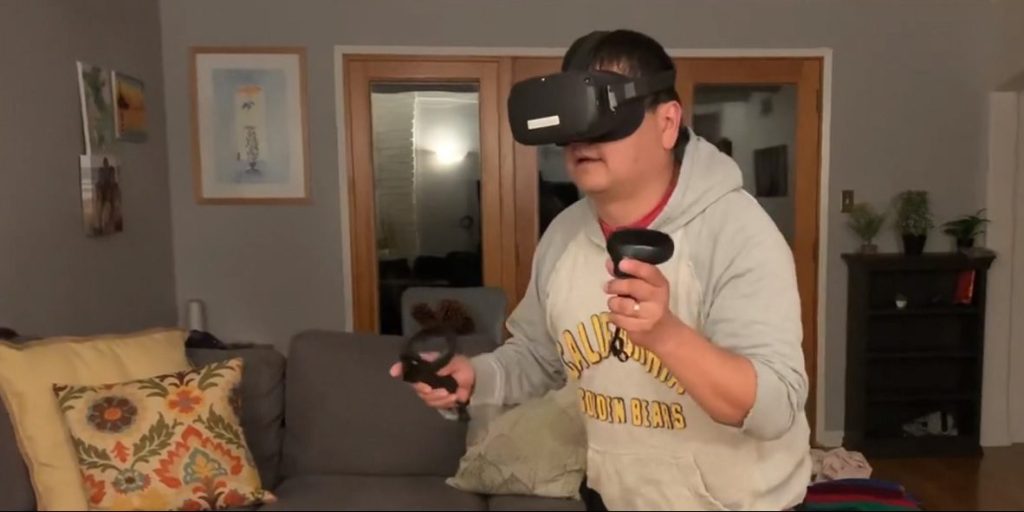 Above: The Oculus Quest doesn’t always rest as well on people’s heads.

VR Power is an extraordinary accessory that’s unfortunately supply constrained just like Oculus Quest right now. In our recent review, the battery pack attaches to the strap behind your head and then runs a short wire over the top of your head to the Quest’s charging port. This dramatically extends the battery life of the headset while simultaneously operating as a counterweight that relieves pressure from the face.

While we’re perfectly happy with VR Power — and it made Quest usable for a staffer who found the headset unwearable before — it is a bummer this add-on doesn’t pass through the wired Oculus Link signal to the headset. According to Rebuff Reality, the creator of the VR Power accessory, the pack isn’t made to pass through any data over its connection. That means you have to disconnect VR Power and connect your PC over a wire to download videos recorded on the headset, and to upload non-store approved software packages to the device. So could a Facebook-made accessory that balances weight and extends battery life take the extra step and also pass through PC data? It would be cool, but the Wireless Oculus Link and App Upgrades outlined above seem so likely, and would be such an improvement, that there may not be need for an official alternative to VR Power capable of passing data over a wire from a PC.

What we would like to see, however, is something more like the “Frankenquest” some owners have also made that don’t necessarily extend battery life but do balance the headset’s weight across the head better. Valve Index-like off-ear audio and better balance is a separate issue from battery life, but one we’d like to see officially addressed somehow.

Likelihood: Facebook officially endorsing modifying the Quest’s built-in strap after purchase doesn’t seem likely. That said, extending battery life and providing better balance to the Quest should be a priority for Facebook as it would make the headset usable to a wider range of people and for longer periods of time. Since VR Power works just fine, we’d love to see Facebook endorse the product if they don’t develop their own, or perhaps offer future Quests with an upgraded strap or facial interface option that better balances weight and the way it fits the face.