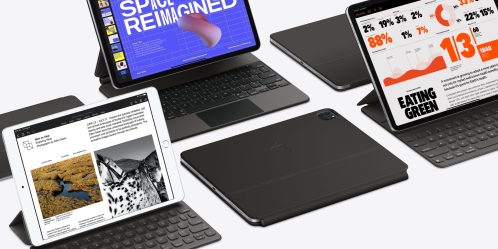 Apple spent most of the iPad’s first decade fighting to keep its tablets trackpad-free, a decision that left the otherwise superb platform with one huge disadvantage compared with Microsoft’s Surface tablets. Thanks largely to the iPhone, Apple’s all-or-nothing focus on touchscreens blinded it to the continued value of separating the control surface from the display for some applications, notably including productivity apps and games. That’s finally about to change.

On March 24 — nearly 10 years to the day the first iPad hit stores — Apple will release iPadOS 13.4, which up until now appeared to be an almost trivial “point release” ahead of June’s expected iPadOS 14 launch. Today, Apple confirmed that iPadOS 13.4 will dramatically expand an Accessibility feature introduced last year to provide preliminary support for some pointing accessories, enabling all supported iPads to use trackpads and mice over Bluetooth or wired connections. The question will then become how third-party developers support these accessories.

I’m somewhat encouraged by two details. First, you won’t need to buy one of Apple’s super-expensive $299 to $349 iPad Magic Keyboards to use the new feature. If you don’t follow such things, Apple’s charging two or three times more than Microsoft’s Surface keyboard/trackpad accessories, which start at around $100 on sale but are more commonly in the $160 range. There are already countless mice and trackpads to choose from, so you won’t need to go broke here.

Second, trackpad support isn’t just being limited to iPad Pros; it’s also coming to iPad Air 2 and later Airs, iPad mini 4 and later minis, and fifth- through later-generation iPads. For the time being, Apple appears to be limiting itself to making iPad Pro trackpad-keyboard combos, and leaving the other models to third parties such as Logitech, which will sell $150 versions — notably, with function keys! — for iPad and iPad Air models.

That said, making trackpad hardware available is only half of the equation: iPad software developers will have to pick up the slack and make the most of the new peripherals. This is the part that has me a little concerned.

Put aside the fact that iPad developers have spent the past 10 years creating touchscreen-optimized UIs, and will now need to at least consider supporting two different input paradigms for their apps. I operate under the assumption that Apple’s integrated iPadOS 13.4 APIs for trackpads and mice will make basic support pretty easy, and the animated demos Apple has shown for the feature look silky smooth — perhaps even better than on the Mac. But all apps, including Apple’s own iWork suite, will benefit from developer-specific fine tuning and trackpad/mouse specific feature additions.

It’s not clear at this point how much or little iPad developers will lean on input paradigms developed for the Mac. Ideally, we might see games such as first person shooters add support for trackpad-controlled head motion and keyboard movement, but that might be too much to expect, especially if some iPad keyboards lack for certain Mac keys. Apple’s history of screwing up gaming-related input solutions (see: iOS game controllers, Apple TV Siri Remote, and so on), to say nothing of overpricing its accessories, could really limit game developers’ interest in supporting iPad trackpads and mice.

I strongly suspect that non-gaming developers, particularly productivity and pro app makers, will do their best to support iPad trackpad and mouse use. Testing likely won’t be as hard for common apps as it would be for games, and even the baseline of support within iPadOS will probably be a good enough starting point for many types of software. It might take a year for iPad apps to reach true input parity with Macs, but I think we’ll get there.

Some developers are already speculating that the addition of trackpad and mouse support to iPads could be in preparation for a beta version of macOS that will run on ARM devices. Equipped with a $299 Magic Keyboard, a $799 iPad Pro could let developers see what an entry-level MacBook might feel like. I’m not yet convinced that will actually happen, but if it does, Apple’s fully online WWDC will be even more memorable than expected, and a major turning point for both the iPad and Mac platforms.